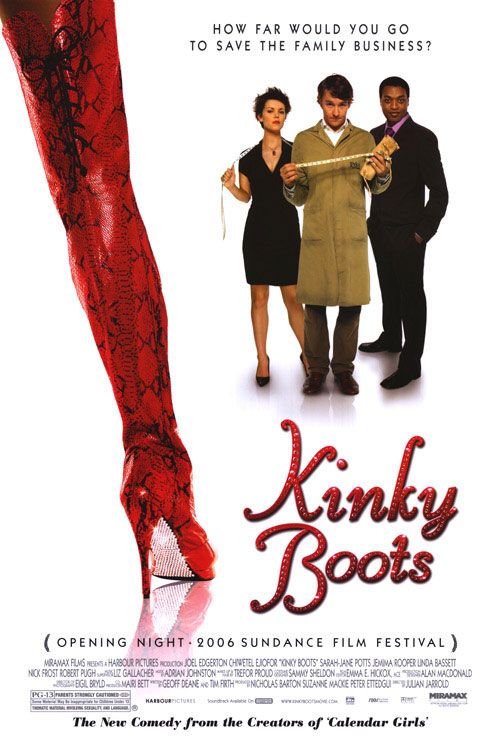 KINKY BOOTS is a British movie getting some minor buzz in North America. The story is about Charlie Price, the son of a dedicated, deceased shoemaker, who tries to save the family factory by developing a niche line of sexy boots for cross-dressers and other deviants. Charlie’s efforts to save the business cause a rift between him and his fiancé. She wants Charlie to sell the factory and move to London with her. Charlie hires Simon, the cross-dressing performer and designer who inspired his idea for the boots. Simon’s effeminate sexuality raises questions of prejudice that also threaten the project. Eventually, even Charlie feels threatened by it.

KINKY BOOTS suffers from multiple premises that make the movie seem too long. Consequently, the story’s climax really occurs at the end of the second act. This makes the movie’s attempt to fashion a climax for the third act somewhat tedious. All this undermines the movie’s appealing characters and performances. KINKY BOOTS is also fatally tainted by its abhorrent attempts to promote the vile homosexual agenda of “transgender politics.” The Bible thoroughly condemns such sin. People ignore its condemnation at their peril.

(RoRoRo, PCPCPC, PaPa, HoHoHo, B, Cap, LL, V, SSS, N, AA, MMM) Very strong Romantic, politically correct, somewhat pagan worldview endorsing (sometimes implicitly, sometimes explicitly) the homosexual agenda of transgender politics and eroding sexual differences, with some moral elements concerning a son trying to save his family’s business because he’s also concerned about the employees who depend on the business to earn a living, plus some pro-capitalist elements but lacking moral limits; 14 obscenities (including two “f” words and some uses of the English word “bloody”), one strong profanity and seven light profanities; light violence includes three tough guys harass a man in female clothes and man knocked unconscious with shoe and knocked unconscious when he falls down later; no implied or graphic sex scenes, but man often dresses in women’s clothes (an extreme form of sexual perversion) and acts effeminate, other cross-dressing men are shown, two men apparently try to kiss, engaged couple lives together and man climbs into bed late one night while woman’s asleep, and movie promotes homosexual transgender politics; brief upper male nudity; alcohol use and man gets drunk; no smoking; and, cross-dressing man sings in club about embracing evil and about temptation, and movie endorses confusion of sexual identity.

KINKY BOOTS is a popular British movie getting some minor buzz in North America. It is a well-made film with some appealing characters, but it suffers from an uneven story and mature themes that prevent it from reaching a broader audience outside Britain.

Inspired by a true story, the movie opens on a black boy dressed like a girl whose father stops him from dancing in tights and women’s red shoes. Cut to Richard Price, owner of a family shoe factory in Northhampton, who is poetically instructing his young son, Charlie, on the importance of shoes.

Years later, Mr. Price is seeing Charlie off to London to live with his fiancé, Nicola. No sooner is Charlie with Nicola that he gets news of his father’s untimely death. Charlie takes over the factory, but learns that his father lost a big contract, but kept making the shoes in hopes of selling them at some point.

Charlie goes to London to try to unload the shows, but the shoe outlets want cheap shoes from overseas, not the fine footwear Price & Sons provides. Charlie gets a bit drunk before returning to Northhampton. He tries to stop three tough men from harassing a black woman. The woman knocks Charlie unconscious on a backswing from her broken red boots when she tries to hit one of her attackers. Charlie wakes up to find that the woman is actually the grown-up boy in the first scene, Simon. Simon is a cross-dressing female impersonator at his own club, The Angel Club, where he designs everything, including the costumes he wears. Simon now calls himself Lola.

Back in Northhampton, Charlie reluctantly has to start firing a few people. “What can I do?” he asks them rhetorically. One pretty young worker, Lauren, tells him that he should try to find a niche market like some of the other British shoe factories.

Charlie, remembering Simon’s broken heel, decides that he might be able to market tougher boots to the growing male transvestite crowd in London. With help from Simon’s talent for design, Charlie and his employees begin to fashion a line of “kinky boots” for the big international fashion show in Milan, Italy. The project to save the factory causes a rift, however, between Charlie and Nicola. She wants Charlie to sell the factory and move to London with her. Also, Simon’s effeminate sexuality raises questions of prejudice that threaten everything. Eventually, even Charlie feels threatened by it.

KINKY BOOTS suffers from multiple premises that make the movie seem too long. Consequently, the story’s climax really occurs at the end of the second act, This makes the movie’s attempt to fashion a climax for the third act somewhat tedious. All this undermines the movie’s appealing characters and performances, including the fine singing voice and stage presence of Chiwetel Ejiofor, the actor who plays Simon, the cross-dressing designer/performer. Ejiofor might create a really nice singing career if he did less offensive songs in a less offensive manner.

Of course, KINKY BOOTS desperately tries to promote the vile homosexual agenda of “transgender politics.” This abhorrent agenda fatally detracts from the emotional appeal of Charlie’s story. His story could have been an uplifting one of a son trying to honor the beloved traditions of his ancestors, including the traditions of his father. Instead, the anti-Christian, homosexual politics of the politically correct, Neo-Marxist liberals in our midst take center stage.

Neo-Marxist liberals have watered down the Church and betrayed the Christian traditions of Western Civilization by throwing out the Bible, diluting the Gospel of Jesus Christ and stomping on God’s Law. They have also degraded our popular culture and corrupted the hearts and minds of our children and grandchildren. This is also what happens to the movie KINKY BOOTS.

MOVIEGUIDE® doesn’t expect human beings and the movies they make to be completely free of immorality, but we’re extremely tired of the in-your-face sexual politics of the left-wing in the entertainment community, and those who go along with it. The Bible thoroughly and clearly condemns such sin. People ignore its condemnation at their peril.

Regrettably, there is not enough outrage among Christians and Americans concerning this abhorrent trend. There is also not enough outrage against the journalists, government bureaucrats, political leaders, and teachers who promote it. Without more help from concerned Christians and concerned Americans, MOVIEGUIDE®’s efforts to overcome this evil juggernaut with the Gospel of Jesus Christ will fail.

Help us get the word out. Help us obtain the kind of mass support we need to transform the culture by redeeming the values of the mass media of entertainment.