"A Life of Sacrifice and Service " 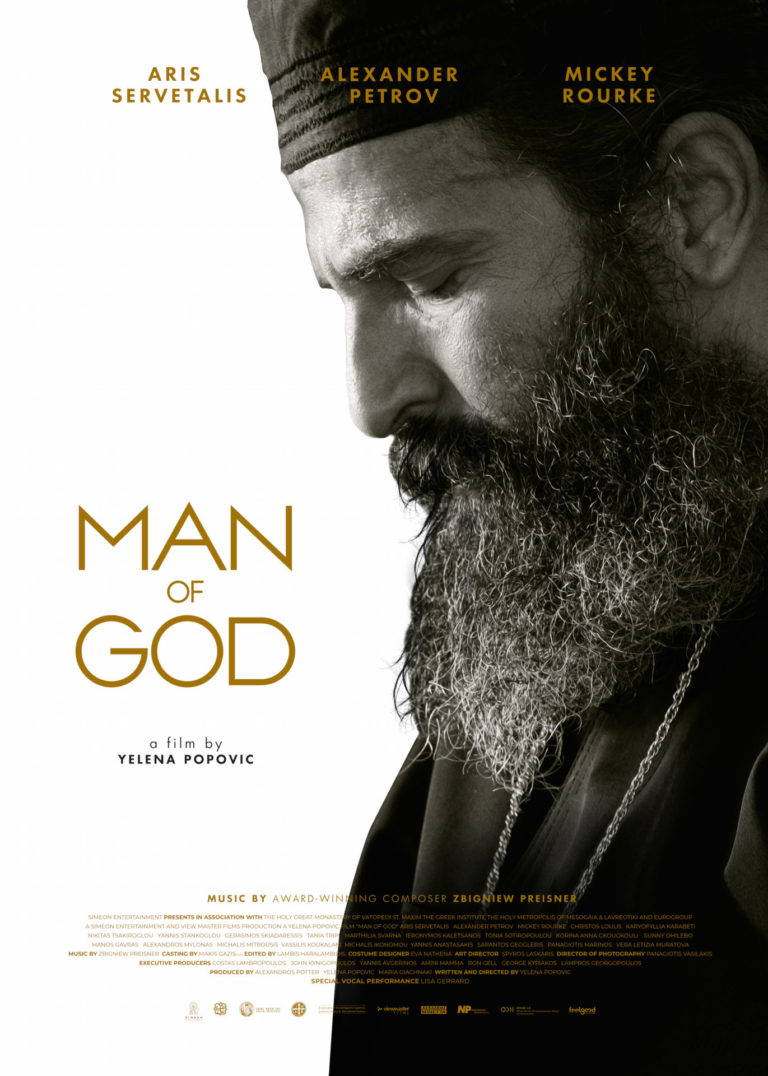 MAN OF GOD tells the story of the Greek Orthodox Bishop Nektarios of Aegina. In 1891, Nektarios is unjustly slandered, falsely accused and convicted without a trial, then removed from his duties as Bishop of Cairo in Egypt. Exiled to Greece, he lives in poverty as he continues to live Gospel charity toward everyone he encounters. With pressure from church benefactors, his name is finally cleared. Nektarios becomes director of a school for seminarians and secular students. He then founds a monastery for nuns on the island of Aegina. Throughout his story, Nektarios is met with opposition and hatred at every turn. However, he returns this ill treatment from other church leaders with the Gospel values of love, patience, kindness, and self-denial.

The driving force behind the MAN OF GOD is the Bishop’s great faith in the redeeming power of Jesus Christ. Bishop Nektarios lives the Gospel in service to the orphaned, the poor, the uneducated, and the needy. MAN OF GOD is a great, faith-filled, art-house movie for teenagers and adults. It tells a profound story of Christian sacrifice and service.

(CCC, BBB, V, S, M):
Dominant Worldview and Other Worldview Content/Elements:
Very strong Christian, moral worldview about a Greek Orthodox Bishop and monk who gives up everything for Jesus Christ and constantly helps people in need from 1846 to 1920;
Foul Language:
No foul language;
Violence:
Some non-graphic violence associated with Christian martyrdom;
Sex:
Some dialogue refers to sexual misconduct and a violation by authorities to prove a Nun’s virginity;
Nudity:
No nudity;
Alcohol Use:
A drunken man stumbles around and complains about how hard life is for everyone;
Smoking and/or Drug Use and Abuse:
No smoking or drugs; and,
Miscellaneous Immorality:
Nothing else objectionable.

MAN OF GOD is a true story of an Eastern Greek Orthodox Bishop and Saint, Nektarios, who is slandered, convicted without a trial, and unjustly exiled from Egypt in 1891. In spite of false accusations and the most reprehensible treatments from his enemies within his own church, Nektarios continues to preach the Word of God and live the Gospel in service to the orphaned, the poor, the uneducated, and anyone in need.

The journey in MAN OF GOD opens with the beloved Bishop and Priest Nektarios ministering to the poor and destitute. He cares deeply for everyone and even serves those people outside of his Christian faith. While serving as the Bishop of Cairo, his popularity among his Egyptian flocks stirs up jealousy and contempt within his church hierarchy. False charges are brought up against him after a secret meeting conducted by a trio of his enemies. The trio show great discomfort with Nektarios and his commitment to serving people whom they call “harlots and sinners.” There are undertones that the real concerns have to do with the money Nektarios gives away. One objector claims that Nektarios will bankrupt the church with his charitable ways. Another major concern is that Nektarios will usurp the Patriarch, the highest ranking bishop in the Greek Orthodox Church in Alexandria, Egypt, with his popularity. As the battle to maintain money and power rages, Nekatarios is convicted, removed from his duties and exiled from Egypt in 1891 without a trial, and even without giving him a reason.

Nektarios appeals to the Patriarch, whom he considers like to be a father to him. However, the Patriarch abandons Nektarios and refuses to see him. Nekatarios humbly acquiesces. He returns to Greece. Living in poverty, Nektarios tries to be a blessing to everyone he meets. Desperate, he appeals to the government to give him a post as a preacher. Met with more opposition, he’s told he is no longer a Greek citizen. However, a government employee has a soft spot and gives Nektarios a post that no one else would want.

Nektarios struggles to minister on an island that does not want the church present, due to scars of scandals by past leaders. At a dead end, Nektarios finally finds some relief. A few church benefactors demand that Nektarios’ name be cleared, and that he be returned to his Church duties. Nektarios is sent to be the director of a school for seminarians and secular students.

The school quickly grows under the Bishop’s rather “unorthodox” Orthodox practices. For example, when students are fighting, he punishes himself with a hunger strike until they learn to get along. Nektarios touches others deeply with the Gospel message. He covers duties for the sick janitor who is under threat of losing his job. He pays for medical treatment for a sick student who can’t afford it. In addition, he organizes an all-night prayer vigil for the deathly ill student, who subsequently recovers.

The Bishop is a blessing wherever he goes. He also faces persecution and hatred wherever he goes. On a mission from God, Nektarios, takes a group of nuns under his wing. With permission, he builds a monastery and a community for the nuns on the island of Aegina.

However, charges are brought up against him again when the hierarchy denies ever giving him permission to build a monastery. Horrific and unfounded accusations against him put Nektarios at the center of slanderous and hateful charges once again. The authorities violate the nuns in the most egregious ways. The violations only serve to prove Nektarios’ innocence once again. This round of hateful accusations stands out from the rest. As Nektarios’ beloved friend and follower, Kostos, points out, Nektarios will not and has never fought or tried to defend himself, but he fights and defends others.

One can’t help but notice that, in the Gospels, Jesus never tells people He will pray for them and send them away. Rather, Jesus prays and then offers concrete means of helping to meet their needs by providing relief from pain, food or even money (Matthew 17:24-27). Nektarios lives a life as close to Christ as he possibly can. He turns away no one, and suffers greatly for it. At the end of his life’s journey, the Bishop, riddled with unbearable pain, only asks for strength to bear the pain and protection for his people. The pinnacle of MAN OF GOD is both extremely touching and also painful in the way it illustrates the cost of true Chrstian love, sacrifice and service. On the Hollywood screen, we want to see the happiness of resurrection in this life. For some, this happiness manifests itself here in this life. For others, however, the happiness of the resurrection is experienced in the next life. Nektarios often repeats, “Jesus Christ have mercy on me.” This is the reality that is the hope and strength of the beloved Bishop who dares, until the very end, to live the Gospel story. This type of faith is of the highest caliber, as it goes against human nature to accept false accusations, cruelty, exile, suffering, and hatred. MAN OF GOD is a great, faith-filled movie for teenagers and adults. It tells a profound story of Christian sacrifice and service.

That said, the movie is very European in structure and episodic. This is a good approach for TV and streaming biographies, but Hollywood movies re-imagine biographies to create emotive and orchestrate drama. So, while MAN OF GOD would be great on television or streaming as an historical biography, it would not on the big screen.