MAN OF THE CENTURY 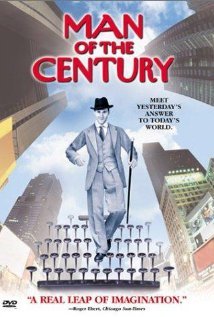 In the comedy MAN OF THE CENTURY, Gibson Frazier plays an old-fashioned man who wins over the crude modern world with his positive, innocent, 1920s outlook on life. Frazier plays Johnny Twennies, a young newspaper reporter who runs afoul of a mysterious gangster and who has problems with his suspicious modern girlfriend, Samantha. Johnny's mother orders him to show up at a dinner party with Samantha, or get married to another young woman she has in mind. Johnny must get to the party with Samantha in time, while getting the scoop on the gangster in order to keep his job.

MAN OF THE CENTURY is a delightful, funny satire that is marred by really strong foul language from the bad guys, the rescue of a woman from a sadomasochist and references to the homosexuality of a couple minor characters. This objectionable content rates an extreme caution, but the spirit of the movie is decidedly in Johnny's favor. It opposes the contemporary sensibilities of the other characters. Johnny in fact wins them all over in the movie's upbeat ending. MAN OF THE CENTURY is a nostalgic cry for more innocent times. To that, we can only say, "Amen!"

This man knows a lot of fancy patter and he’s got a lot of moxie. In fact, this man is pretty jake all around. After all, he’s the MAN OF THE CENTURY!

Who are we talking about? Why, Johnny Twennies of course!

In the black and white comedy MAN OF THE CENTURY, Gibson Frazier plays Johnny Twennies, a young newspaper reporter in modern day New York City who acts as if he’s stepped out of a 1920s movie. While other people curse around him, old-fashioned Johnny only knows how to say things like, “Applesauce!” and “Rats!” However, Johnny is having trouble with his girlfriend. She’s an art gallery professional named Samantha Winter, who’s beginning to wonder why she can’t even get to first base with the guy, much less hit a home run, if you know what we mean.

Despite his problems with Samantha, Johnny has no problem dealing with a couple of foul-talking thugs who work for a mysterious criminal on the run. Although they don’t understand his quaint way of speaking, he easily disarms them and sends them packing. When his boss demands a hot news story or else he’s fired, Johnny pursues the criminals’ mysterious boss. Meanwhile, his girlfriend Samantha starts following him and his mother orders him to show up with Samantha at a special dinner party or else he’ll have to marry the debutante of some family friends. All of this comes to a head at the dinner party, where Johnny eventually wins over the hearts and minds of the modern world.

MAN OF THE CENTURY is a delightful, funny satire that is mostly marred by the really strong foul language of the thugs, a scene with an opera impresario who’s into sadomasochism (don’t ask) and some references to two minor male homosexual characters, one of whom works with Johnny’s girlfriend and another man assigned by Johnny’s boss to be his photographer at the newspaper. This objectionable content rates an extreme caution for the family audience. Drastically cutting down on it would make the movie far more accessible to the general audience. Still, the spirit of the movie is decidedly in Johnny’s favor. The movie definitely does not side with the deplorable condition of our modern world, which is presented in sharp contrast to Johnny’s innocent, better (and more fun!) world.

MAN OF THE CENTURY, despite being shot in black and white, is also filmed in an expert fashion. It opens a slightly bit weirdly, however, showing a scratchy, silent version of Johnny waking up and getting dressed. Don’t let that opening fool you, however. The movie is a pleasant diversion throughout most of its running time. Frazier makes an appealing hero as Johnny. His acting brings the whole movie, and his character, to life. Special kudos also must go to his romantic lead, Susan Egan as Samantha, and to the movie’s jaunty musical score.

MAN OF THE CENTURY is a nostalgic cry for more innocent times. To that, we can only say, “Amen!”