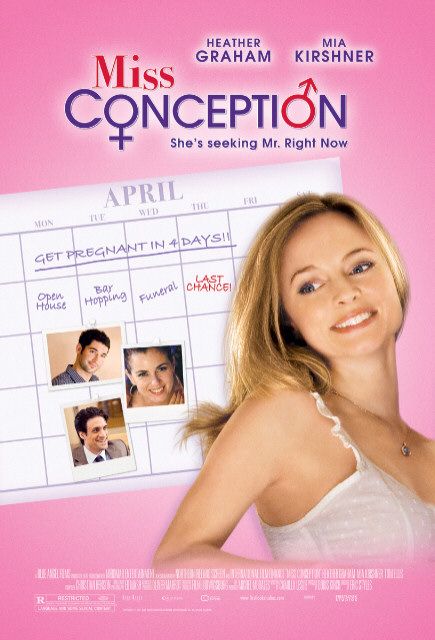 In MISS CONCEPTION, Georgina hears her “biological clock” ticking, but lives with her boyfriend Zak, who is not interested in having children. Georgina discovers that, because of her medical condition, she now only has four days at the end of the month in which to ever conceive a child. Her boyfriend doesn’t hear the news, because he is away on business and unreachable. Knowing that Zak doesn’t want children, she sets out to find someone with whom to have a child. Her plan is farcical in nature such as going to a funeral to find “emotional men” and getting a “sample” from her homosexual friend. None of these plans work. Meanwhile, Zak decides that he wants to have children but returns too late.

MISS CONCEPTION is not well made, but Heather Graham shines as the lead character. The story is silly and filled with too many coincidences. There are many negative elements including rear male nudity, foul language, many scenes of sex and attempting to have sexual relations, worshipping pagan fertility gods, scenes of male strippers, and a homosexual party. There are much better movies, such as PRINCE CASPIAN.

(PaPaPa, FRFRFR, HoHo, C, B, LL, SS, NN, A, D, MM) Very strong, slightly mixed, pagan worldview with pagan religion and superstitions (including idol worship and saying mantras), strong homosexual elements, though also with an overall theme of the value of children and positive references to Jesus Christ and the Virgin Mary in one scene with a nun who says that not having a child is the greatest sacrifice she has made for God; 20 obscenities and three profanities; no violence; depicted sexual relations among unmarried couple, male stripper, numerous “attempts” at sexual relations, much discussion of sex, men kiss; rear male nudity among multiple men, upper male nudity among multiple men, female in underwear multiple times, and a club has many women immodestly dressed; some alcohol drinking; smoking; and, stealing, lying, deception, reference to a past abortion.

MISS CONCEPTION is the story of Georgina, a London professional who hears her “biological clock” ticking, but is living with her boyfriend Zak, who is not interested in having children. Georgina discovers that because of her medical condition, she now only has four days at the end of the month in which to ever conceive a child. Her boyfriend doesn’t hear the news, because he is away on business and unreachable by cell phone.

Knowing that Zak doesn’t want children anyway, Georgina sets out to find someone with whom to have a child. Her plan is farcical in nature such as going to a funeral to find “emotional men,” going to a male stripper nightclub, listing her house for sale in order to meet a professional man, using a sperm donor bank, getting a “sample” from her homosexual friend, and even seducing an employee. None of these plans work. Meanwhile, Zak decides on his own that he wants to have children and in a “rush to the airport” kind of cliché plot twist, he makes it back, but too late. However, they do have good news in a few months.

MISS CONCEPTION is mostly unfunny with implausible plot twists. Though Zak decides about the baby on his own, it’s never clear why he’s rushing back to see Georgina since he doesn’t know about the time constraint. Heather Graham as Georgina is the best thing about the movie. Her vulnerability and desire to have a baby paints a strong character that holds the story together, though barely. The directing is competent as are other production elements, but none of it is stellar.

The positive element is the desire to have children and the value of family. When Zak is away filming a documentary in a Catholic church, it is a conversation with a nun that changes his mind about having a child. He looks at a statue of Mary with the infant Jesus and the nun mentions that for her personally, not having a child was the greatest sacrifice she made to be a nun. Jesus is not mentioned by name, but it’s a positive note nonetheless.

The rest of the movie, however, is filled with an immoral story as Georgina attempts to find someone to father a child. There are multiple scenes with inappropriate content. For instance, she inadvertently goes to a party where all the guests are homosexual men who are dancing, taking off their shirts and kissing one another. There’s a scene with a male stripper. Also, her girlfriend Clem says she had an abortion when she was younger because she didn’t want to be fat and wanted to wear short skirts.

There is a “fantasy scene” where Georgian pictures all the men in a crowd naked, though we see them mostly from behind. Most of the dialogue is spent discussing ways to seduce men. The most troubling aspect is that, as part of Georgina’s morning ritual on the four important days, she meditates and repeats a manta to pagan fertility gods. She has statues in her house, lights candles and consults a book of mantras about fertility.

Because of these negative elements, most media-wise moviegoers will avoid MISS CONCEPTION.