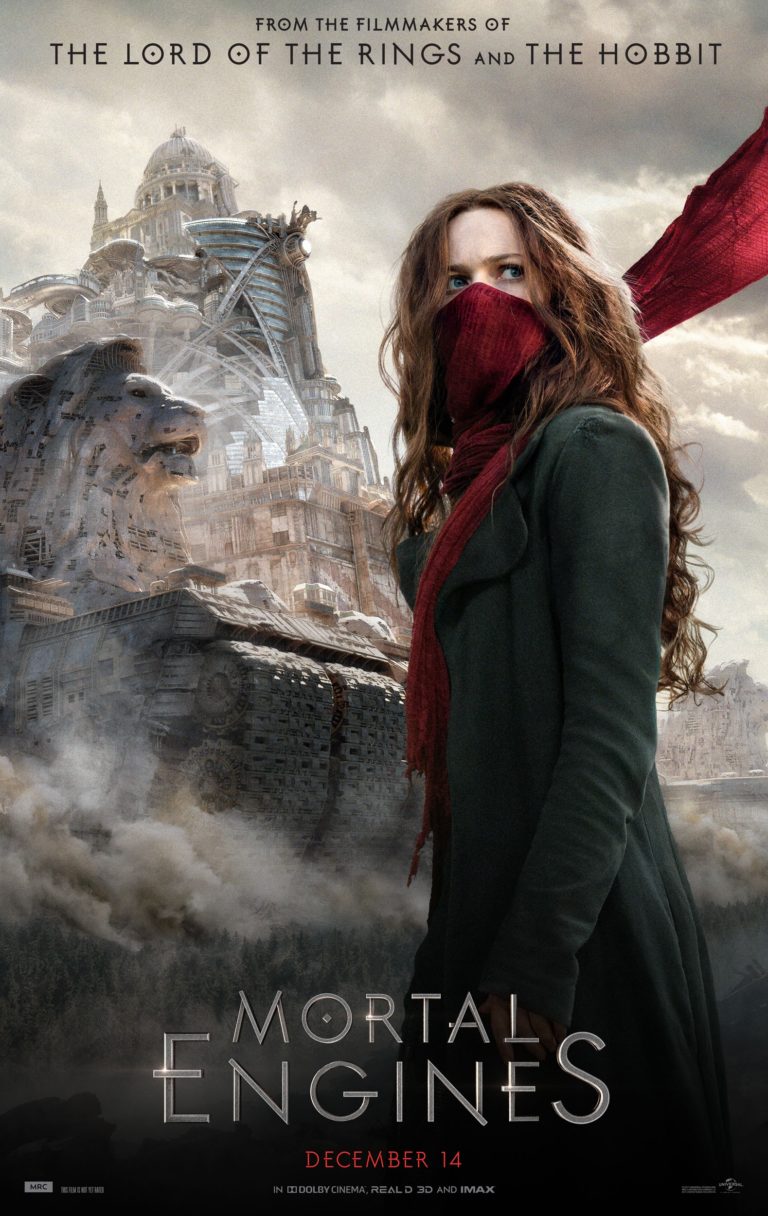 MORTAL ENGINES is a post-apocalyptic adventure movie hundreds of years in the future after a catastrophic war decimated most of Earth. Now, cities are built on giant machines roaming the earth and swallowing other smaller cities to steal their resources. London is one of the great cities. It preys on the weaker cities. A young woman named Hester is determined to avenge her mother’s murder by killing Thaddeus, one of the leaders in London. Hester learns Thaddeus has sinister plans to rule the world. So, there’s more at stake than she realized, and she must work with others to stop him.

MORTAL ENGINES is adapted and produced by Peter Jackson, who made THE LORD OF THE RINGS movies. The movie has spectacular visual effects, but there are too many poorly written and directed characters and some terrible acting. Frustratingly, the movie contains attacks on Christianity, and sports a pagan, Eastern religious worldview. MORTAL ENGINES is light on foul language and the intense violence isn’t graphic, but it’s still enough to call the movie excessive, especially considering the movie’s Anti-Christian, Anti-Western pagan worldview.

(PaPaPa, AbAb, PCPC, FRFR, B, C, LL, VV, A, M): •
Dominant Worldview and Other Worldview Content/Elements:
Very strong pagan, Eastern religious worldview (especially at the end) associating Christianity in a politically correct way with barbaric, violent, society, and eastern religion with peace and harmony, but there are some light moral, redemptive elements attacking the Darwinism and survival of the fittest attitudes of the villains, promoting courage, and positively encouraging people to fight for the innocent, mercy, and hope; •
Foul Language:
Five light obscenities and eight profanities; •
Violence:
Moderate action violence, multiple people are stabbed in the abdomen and sliced in the face with a knife, lots of hand to hand combat, intense chase sequences, a fairly light aerial battle scene, an electric weapon vaporizes much of a city, it’s implied that many people in society are cannibals; •
Sex:
No sexual content; •
Nudity:
No nudity; •
Alcohol Use:
Characters in a bar are drinking some sort of alcoholic beverage; •
Smoking and/or Drug Use and Abuse:
No smoking or drugs; and, •
Miscellaneous Immorality:
Some vengeance that’s not totally condemned.

MORTAL ENGINES is a post-apocalyptic fantasy adventure movie set hundreds of years in the future after a catastrophic war decimated most of earth. Now, cities are built on top of giant machines that roam around the earth eating up other smaller cities or towns, and stealing their resources.

London is one of the great cities. It has a large population that’s separated by class, with the posh and rich living up above in grand beautiful homes, and the poor living below and doing manual labor to keep the city alive and moving. Hester is a mysterious young woman bound and determined to stop London from destroying everyone else, but more specifically, she wants to kill Thaddeus Valentine (Hugo Weaving), who’s Head of the Guild of Historians in London and also happened to murder Hester’s mother when she was only 8-years-old.

Thaddeus is obsessed with the weapons of old, particularly the weapon that caused the apocalyptic event. He wants to rebuild it so London can destroy anything in its path. When Hester attempts, but fails to assassinate Thaddeus, she finds herself in the wasteland accompanied by Tom. A good-natured young man, Tom worked for Thaddeus but just learned that Thaddeus is an evil man. Hester is cold-hearted and hateful and is ready to leave Tom to die in the wasteland. However, she eventually agrees to partner with him so they can both get back to London alive.

On their journey, Hester and Tom have many close calls, and they learn to rely and trust one another.

When Hester and Tom are saved by an outlaw, Anna, they learn that there is a society in the East that doesn’t live by survival of the fittest but lives in peace. Thaddeus’s weapon, which he’s built inside of St. Paul’s Cathedral, could destroy the wall that protects this society in the East from everyone who wants to plunder it. Turns out that Hester has the key given to her by her mother that can turn off the weapon for good.

Can they stop Thaddeus and the city of London which is rolling towards them?

MORTAL ENGINES gets a couple points for the creative world they’ve brought to life from Phillip Reeve’s book series. The movie, which is adapted and produced by Peter Jackson (THE LORD OF THE RINGS) and directed by former visual effects supervisor Christian Rivers, has some spectacular visual effects. A couple of the battle sequences at the end are very entertaining as well. That said, a movie isn’t made on visual effects alone. MORTAL ENGINES most glaring problem is not only too many characters, but too many boring characters that were poorly casted and directed. Hugo Weaving as usual is a great villain, but everyone else misses the mark.

Most frustratingly is the parallels the movie tries to make comparing Western Civilization with brutality and violence, and Eastern Civilization with peace and harmony. That said, the mindset of the evil Londoners is “Municipal Darwinism” to use their words, which admittedly is abhorrent and justifies the strong preying on the weak. In the final battle however, Thaddeus’s weapon literally comes out of the top of a Christian cathedral, and the “kill switch” that Hester’s mother gave to her is in a necklace with pagan symbols. It’s utterly goofy and preposterous.

While MORTAL ENGINES is relatively light on foul language, and the violence isn’t too graphic, it’s still enough to push it into the excessive when you add in the Anti-Christian, pagan worldview the movie espouses. The movie’s politically correct pagan attack on Western Civilization and Christianity really comes to the foreground in the last 20 minutes or so. Interestingly, though, MORTAL ENGINES also attacks the Darwinist, survival of the fittest attitudes of the villains.