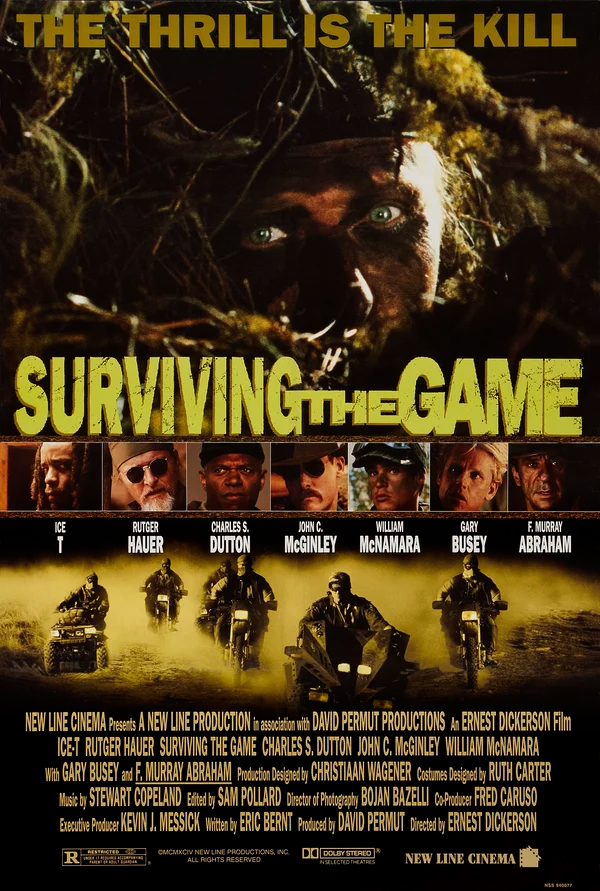 ICE T portrays a character who is unwittingly hired to be the "game" for a group of demented hunters in the Oregon wilderness in SURVIVING THE GAME. In addition to the evil inherent in its premise, this is a film riddled with foul language, graphic violence, amoral characters, and the messages that evil triumphs over evil and we are responsible for our own self-worth and revenge is the way to attain it.

Ice T portrays a character who is unwittingly hired to be the “game” for a group of demented hunters in SURVIVING THE GAME. After attempting suicide, he meets the partners of “Hell’s Canyon Outfitters” and is taken to a remote cabin where he is met by a hunting expedition comprised of wealthy men who pay large sums of money to hunt human beings with an array of expensive weapons. He is sent into the forest and told if he makes it to civilization, he will survive. Perhaps half of the film is made up of the actual hunt in which almost all of the characters meet some kind of grizzly death, either at the hands of each other or of our “hero.”

Although the villains in this film are never portrayed as having justification for their actions, the film is about revenge on one level or another, and the overall humanist message is that a restoration of our sense of self-worth is ultimately up to us. Most disturbing of all is the notion that evil justifies evil. We are expected to feel vindicated when Mason triumphs over his enemy in a cold-blooded retaliation. An extremely violent film, it is not only riddled with foul language and horrifying images, its production values are weak with writing that seldom gives a somewhat noteworthy ensemble of actors a chance to make their characters anything more than two-dimensional.