"Friendship and Marriage Win over Temptation" 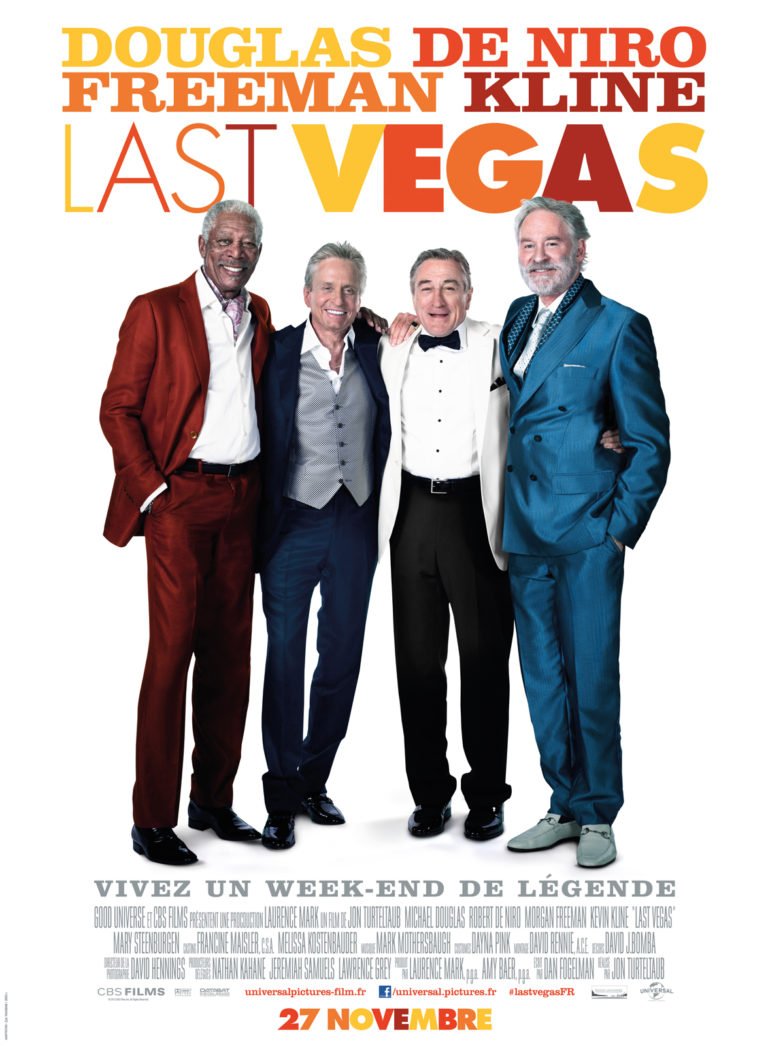 LAST VEGAS is a boisterous and problematic, though occasionally touching, comedy. Four old and elderly friends go to Las Vegas for a bachelor party weekend when one of the gang decides to settle down at age 70. Along the way, there are plenty of rowdy moments, including drinking. Eventually, however, they discover what’s more important in life.

LAST VEGAS has some slow moments, but is entertaining and sometimes even touching. A cast of veterans adds a lot to the story, including Michael Douglas, Morgan Freeman, Robert DeNiro, and Kevin Klein. There are plenty of raunchy, rowdy escapades, but the characters eventually make some moral decisions. At the end, friendship and marriage win over temptation. Also, the men’s friendship is built on love and concern for one another, and each other’s well being. That said, LAS VEGAS has plenty of foul language, lewd content and excessive alcohol use. It also has a brief pro-homosexual endorsement when one character encounters some cross-dressing performers and female impersonators. So, despite some positive content at the end, the content overall in LAST VEGAS ends up being inappropriate.

(PaPa, HoHo, C, BB, FR, LLL, V, SS, N, AAA, DD, MM) Strong mixed pagan worldview about four old men taking a trip to Las Vegas with overt pro-homosexual element when cross-dressing performer who’s straight introduces character to other cross dressers and character says he doesn’t judge, but some light Christian elements and redemptive, moral resolutions to situations that look like they’re headed in a very sinful direction, including a funeral in a church setting, a Christian character, and lifelong faithful marriage extolled, but with some antinomianism; about 47 obscenities and profanities; two comical punches, one when the characters are preteenage boys and one in the present day; strong sexual immorality includes senior citizen’s wife hands him an envelope containing a Viagra pill, a condom and a note saying, “What happens in Vegas stays in Vegas” (giving him approval to cheat because of his “midlife” crisis), same man approaches several women but finds himself propositioning a cross-dressing female impersonator who’s actually heterosexual, young seductress propositions same married man and strips for him, and they kiss, but they end up not doing anything more after he gives a heartfelt speech about his wife, some cross dressing and other homosexual references, another man is living with a much younger woman but is inspired to call off their approaching wedding when his widowed friend says marriage requires a more exact and genuine partnership, men leer at scantily clad women; partial upper female nudity in one scene; extreme alcohol use as elderly men go to party in Las Vegas to celebrate one friend’s up coming nuptials, and two of the lead males get drunk on a combination of Red Bull energy drink and vodka, although they are shown regretting their drinking when they wake up with tremendous hangovers; smoking seen, and young woman asks the old men if they have drugs, but they have no illegal ones she would enjoy, just their varied and numerous prescriptions; protagonists engage in comical deceptions at various times, one elderly Christian character gives the excuse of a church retreat to escape to an unhealthy visit to Las Vegas, gambling and men get comical revenge on a young man who mocked them earlier in the movie by pretending to be Mafia kingpins and making him serve them all weekend out of fear, though one man slips him $1,000 at the end.

LAST VEGAS is a boisterous and problematic, though occasionally touching, comedy about four male lifelong friends who head to Vegas for a bachelor party weekend when one of the gang decides to settle down at age 70. LAST VEGAS has a strong mixed pagan worldview with a small pro-homosexual subplot and excessive drinking, mitigated slightly by a couple light Christian elements and redemptive resolutions to situations that look like they’re headed in a very sinful direction.

The movie kicks off in 1955, when the friends were 12-years-old and called themselves the “Flatbush Four” as they chased girls and engaged in neighborhood escapades. In a hilarious switch, the movie cuts to the present day with a title card reading “58 Years Later” and shows that Sam (Kevin Kline) has been married 40 years and is already trapped in a retirement community with much older people. Meanwhile, Archie (Morgan Freeman) recently suffered a minor stroke that resulted in his over-concerned son keeping him on house arrest. Paddy (Robert DeNiro) has spent the past year wearing a bathrobe in his apartment and mourning the loss of his wife. That leaves it up to Billy (Michael Douglas) to be living the high life. He’s shacked up with a 31-year-old girlfriend in a Malibu beach house. Billy is forced to consider his mortality when he has to perform the eulogy at the funeral of a friend who was just two years older than he is. So, Billy vows to live life to the fullest and proposes to his girlfriend right there at the service.

The four friends reunite in Las Vegas for Billy’s bachelor party weekend, with each of Billy’s buddies hoping to recapture some magic of their own while Billy suddenly has cold feet. The reason for his reticence is an older lounge singer (Mary Steenburgen), whom he meets with whom he has an instant connection. The connection is age-appropriate and makes Billy realize that, even at 70, it may be time for him to grow up.

There are plenty of rowdy moments along the way. For example, Sam is surprised to find his wife has given him an envelope with a condom, a Viagra pill and a “what happens in Vegas, stays in Vegas” note. So, Sam sets out to use his free weekend pass to cheat on his wife. Meanwhile, Archie, a Christian, is dying to gamble and drink one last time, with funny results, and Paddy’s desperate to break out of his depression.

The movie’s marketing makes it appear that it’s simply an old-man’s version of THE HANGOVER movies, but LAST VEGAS thankfully has more on its mind. To be sure, there are plenty of raunchy escapades in the movie, but in the worst cases – particularly in Sam’s quest to commit adultery – the characters wind up making moral decisions. Also, true values of marriage, such as faithfulness and finding an age-appropriate partner rather than marrying simply for an exciting sex life with a younger woman are upheld.

Another strong positive in the movie is that the men’s friendship is truly built on love and concern for one another, and for each others’ well-being. They will speak wisdom and truth to each other to help get their lives in order rather than let them drift in sadness or immorality, as when Paddy lectures his friends that their corrupt initial goals in Vegas would bring them nothing but problems. While there’s no direct endorsement of Christianity, Morgan Freeman’s character is repeatedly discussed as a churchgoing man. Ultimately, he achieves a respectful balance with his concerned son so that they can have a drink together and not be doing wrong.

Some dialogue scenes slow the story down a little. However, the movie succeeds in being entertaining and sometimes touching, though raucous.

As the ringleader of the four men, Michael Douglas he has a wicked charm that’s impressively contrasted by some emotional moments later in the movie. Robert DeNiro, meanwhile, invests his role with energy and grace, particularly in a poetic moment of shadowboxing after he knocks a surly club young man out. Freeman gets to shake off the staid roles he’s been shackled with for the past decade and have some fun. Also, Kevin Kline is a delight to watch after years in which he seemed to utterly disappear from movie houses. Maureen Steenburgen is also a lovely surprise, adding feminine charm to the comical testosterone. Director Jon Turteltaub (NATIONAL TREASURE and COOL RUNNINGS) shakes this comic cocktail expertly, delivering a crowd-pleasing movie.

Although LAST VEGAS ends by extolling friendship and marriage over temptation, too much of the comedy comes from the attempts to break the rules, including the excessive drinking and the script’s sexual situations. LAST VEGAS also has a brief pro-homosexual endorsement when one character encounters some cross-dressing drag queens. In addition to the drinking, there’s plenty of foul language. So, in spite of the feel-good ending and uplifting moments, the content in LAST VEGAS ends up being inappropriate overall.