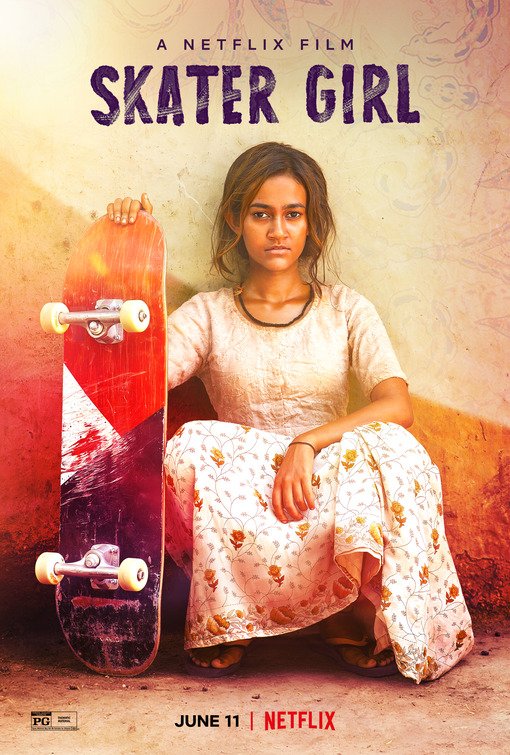 SKATER GIRL is a coming-of-age sports drama from India that follows a teenage girl named Prerna in the rural village of Rajasthan, India, and her struggle between chasing her dreams or following what’s expected of her. A woman from London, Jessica, visits the village and brings with her a skateboarding friend. The village children, including Prerna, are infatuated with skateboarding, and, when they are all given one, begin to use it anytime and anyplace. The local authorities, teachers and parents protest this change. So, Jessica decides to build a skate park and host a tournament. Prerna must now decide whether to follow her skating dreams or conform to the life her parents and society want her to have.

SKATER GIRL is an inspiring, thought-provoking, feel-good movie, with beautiful cinematography, sets and well-written dialogue. It keeps the viewer intrigued without missing a beat. SKATER GIRL has a positive moral worldview promoting perseverance and overcoming obstacles. However, there are some Romantic themes in SKATER GIRL where passion, teenage rebellion and family dysfunction result in violence and immorality. So, MOVIEGUIDE® advises caution for younger children.

(B, Ro, V):
Dominant Worldview and Other Worldview Content/Elements:
The movie has a moral worldview promoting perseverance and overcoming obstacles, but there are some Romantic themes about following one’s passions, teenage rebellion and family dysfunction that result in violence and immorality
Foul Language:
No foul language
Violence:
A man slaps his daughter in anger
Sex:
No sex
Nudity:
No nudity
Alcohol Use:
No alcohol use
Smoking and/or Drug Use and Abuse:
No smoking or drugs; and,
Miscellaneous Immorality:
Dysfunctional family portrayals, a girl steals money from her parents but returns it later, and two boys diss one another in a fight.

SKATER GIRL is a coming-of-age sports drama from India on Netflix that follows a teenage girl named Prerna in the remote village of Rajasthan, India. An Indian woman visits the village from London and introduces herself as Jessica. She notices Prerna and her brother, Ankush, playing on a makeshift skateboard. She records them, and a friend of Jessica, Erick, decides to visit the village.

Erick brings with him a skateboard, and the village children are infatuated with it. Prerna is the first to ride it and falls in love with it.

Jessica, seeing how the village children have reacted, buys all of them skateboards. The children begin to skate everywhere, even on private property, and begin missing school. The teachers and parents begin to complain to the local authorities, who ban skating. All the while, Prerna and her brother must keep the skating a secret from their parents.

Jessica begins to look for new ways to support the children’s dreams. She decides to build a skatepark near the village. She receives funding from a rich woman who owns land nearby and begins working on the park. The skatepark is completed, and the children have a place to skate.

A tournament is proposed and approved, with children from all over India signing up to compete. Prerna wants to participate, but her parents tell her she must marry a local teenage boy she doesn’t know, and that the wedding will take place on the same day as the tournament.

Will Prerna follow her dreams or conform to the life her society has chosen for her?

SKATER GIRL is a well-directed, well-produced, feel-good movie. The sets, such as the skate park, were made for the purpose of the movie, but have contributed to rural villages and provided children a place to have fun. The script is well-written and easy to follow. The acting is cheesy in some areas, but the movie keeps viewers entertained without faltering.

SKATER GIRL has a positive moral worldview that promotes perseverance and overcoming obstacles. There are some Romantic themes, however, about following one’s passions, teenage rebellion and family dysfunction that result in violence and immorality. For this reason, MOVIEGUIDE® advises caution for younger children.