"A Glorious Adventure for the Whole Family" 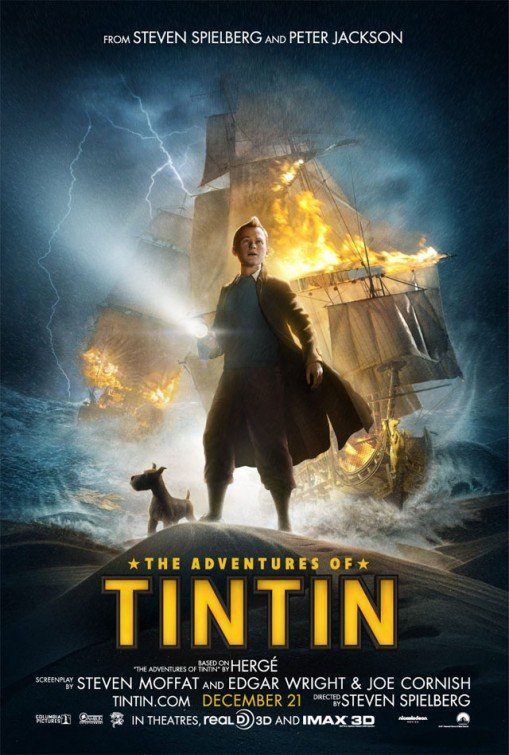 Steven Spielberg’s THE ADVENTURES OF TINTIN is a glorious, grand animated adventure the whole family can enjoy. Tintin is a young curious reporter who buys a model of the lost treasure ship called the “Unicorn.” A sinister man approaches Tintin, offering him an enormous sum for the ship. Tintin refuses, valuing the ship for its beauty, not its commercial value. Eventually, Tintin discovers that there are three model ships, all containing a hidden clue to the lost treasure. He and his dog, Snowy, team up with the drunken descendent of the Unicorn’s captain to retrieve the treasure. To find it, they have to contend with the descendent of the pirate who tried to steal the Unicorn’s treasure before it was lost at sea.

THE ADVENTURES OF TINTIN is an exhilarating, family friendly roller coaster ride. The action is exciting. It’s laced with plenty of fun comedy. Best of all, TINTIN has a strong moral, redemptive worldview. Good conquers evil, light brings truth, and the villain goes off to jail instead of being killed. These themes are combined with a couple overt, positive Christian references, including one to “St. John the Evangelist.”

(BBB, CCC, H, FR, L, VV, AA, D, M) Very strong moral, redemptive worldview with overt and allegorical Christian content, including a reference to “St. John the Evangelist,” references to the Cross and a very strong metaphor throughout of light bringing truth, and good defeats criminal, evil pirates and with no hateful revenge, plus a light, humanist element of pushing past failure through one’s own efforts rather than through the Grace of God; light amount of foul language includes one “d” word, one “h” word and one “I swear to God”; lots of action violence such man is shot and killed by machinegun from behind off screen and falls through doorway when door is opened, man marks newspaper with his own blood to leave a message, man kicks dog, many chase scenes with some slapstick humor, bad guys shoot at heroes, flashback shows pirates attacking ship to get treasure, pirates stab and shoot sailors, pirate leader ready to force ship’s captain to reveal hidden place of treasure, men forced to walk plank off ship and it’s implied they’re eaten by sharks, swordfights, gunfights; no sex; no nudity; light alcohol abuse and drunkenness presented mostly for comedic effect, as drunken man gets sober in the desert he hallucinates story he was told about a past ancestor of his, champagne bottles explode, dog conspires to get man drunk; man smokes tobacco pipe; and, young man trespasses onto property, man picks pockets of strangers but is eventually caught with hundreds of wallets in his house and declares himself a kleptomaniac, and evil pirate lies to ship’s captain about sparing his men.

Spielberg’s back and Peter Jackson’s got him. In his best movie in years, Spielberg’s THE ADVENTURES OF TINTIN (produced by Jackson of THE LORD OF THE RINGS) is a glorious, grand animated adventure the whole family can enjoy.

The story opens with Tintin, a curious young reporter, buying an antique scale model ship of the “Unicorn” at a thrift market. At that moment, a sinister man approaches Tintin, offering him an enormous sum for the ship. Tintin refuses, valuing the ship for its beauty, not its commercial value. When Tintin arrives home, the ship accidentally falls, and the mast breaks. Unknown him (though his loyal dog companion Snowy notices) a small metal cylinder falls out and rolls beneath the furniture. When Tintin leaves, thieves ransack his apartment and steal the ship. When Tintin returns, Snowy leads him to the cylinder. He finds that it contains a tiny scroll with a clue to the whereabouts of a great treasure.

Tintin sets out to discover the secret of the Unicorn. He’s captured by the evil Ivanovich Sakharine for snooping around, but not before a master pickpocket on the loose steals Tintin’s wallet containing the clue. It turns out Sakharine is on the same quest and already possesses another scale model of the Unicorn. In total, there are three models of the Unicorn. Each model contains their own clue, that when combined with light, will reveal the exact whereabouts of the treasure.

Sakharine and his men imprison Tintin aboard a cargo ship, which Sakharine has hijacked from Captain Haddock. Snowy manages to get on board and free Tintin when the sailors aren’t looking. Tintin finds a drunken Haddock just in time to make their daring escape in a lifeboat.

Tintin and Haddock set out on the quest to find the third and final ship model to reveal the treasure left by Haddock’s ancestor. As the duo (with Snowy of course!) race against Sakharine, the plot picks up speed, literally, in an elaborate car chase sequence sure to keep viewers on the edge of their seats. Along the way, there’s plenty of guns, action, and espionage.

THE ADVENTURES OF TINTIN is an exhilarating, family friendly roller coaster ride. The action is thoroughly exciting. Spielberg introduces the three heroes in a steady, captivating way so that the story’s frenetic action doesn’t get in the way of one’s sympathy for them. The comedy is playful and perfectly pitched. It adds immensely to the fun. Also, the motion capture animation is beautifully detailed.

TINTIN is a throwback to Steven Spielberg’s earlier work. In fact, his classic movie RAIDERS OF THE LOST ARK reportedly was compared in France to the Tintin comic books on which this movie is itself based, and that’s the movie this movie most resembles.

Best of all, TINTIN has a strong moral, redemptive worldview. Good conquers evil, an alcoholic sidekick finds sobriety, and the villain goes off to jail instead of being killed. THE ADVENTURES OF TINTIN also has positive overt references to the Cross on which Christ suffered and died for our sins. That’s actually one of the clues to where the treasure lies. Also, at the climax of the whole story, there’s an overt reference to “St. John the Evangelist,” the man who wrote the Gospel of John, the Book of Revelation, and three epistles in the New Testament. This content gives the movie a strong Christian allegorical, symbolic, or metaphorical sense where light from the “sun” reveals the final clue to the mystery of the hidden treasure. The light from the desert sun also helps sober up Captain Haddock enough so he can tell Tintin the story about how his ancestor’s treasure got lost in the first place. Of course, in TINTIN, the treasure is gold and jewels, a family treasure, but all this imagery implies that it’s at the foot of the Cross, in the light that Jesus offers to all people, where one’s true treasure lies. That’s the best message you can send to anyone this Christmas season.

That said, MOVIEGUIDE® advises a light caution to young children for the action violence, gun battles, and some scary pirates. There’s also some dialogue about pushing through failure using one’s own efforts rather than using God’s grace. Finally, the movie runs a bit long for the littlest tykes in your family to see in a theater without fidgeting.

“Where your treasure is, there your heart will be also” – Matthew 6:21.

Rent or Buy THE ADVENTURES OF TINTIN :