NIGHT AT THE MUSEUM: BATTLE OF THE SMITHSONIAN 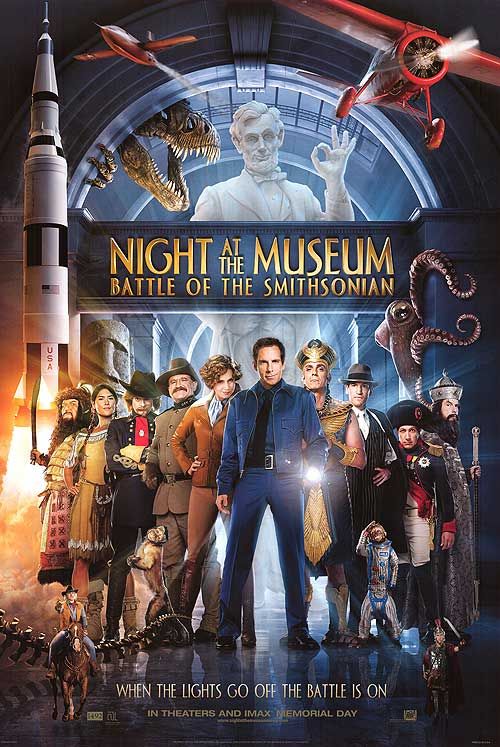 NIGHT AT THE MUSEUM: BATTLE OF THE SMITHSONIAN opens with Ben Stiller as Larry Daley enjoying financial success as an inventor. Larry discovers some of his favorite exhibits (and dearest friends) from his old museum are being shipped to the Smithsonian Institute in Washington, DC. Larry gets a frantic distress call from Jedediah the cowboy. He rushes to Washington, where the gold tablet that brings the exhibits to life has brought to life an evil Egyptian king. The king has enlisted Ivan the Terrible, Napoleon and Al Capone to wake a demonic army from the underworld so they can rule the world. Only Larry, his friends and Amelia Earhart, can stop them.

The NIGHT AT THE MUSEUM sequel may not be quite as delightful and surprising, but it is a charming, creative family adventure sprinkled with romance, humor and excellent effects. The talented cast and the story plunge right away into the action and comedy. Best of all, the movie makes history exciting. It also has a strong redemptive, moral worldview with a couple direct positive references to God and an implied reference to Jesus Christ and His positive impact on history. Some elements require caution, however.

(CC, BBB, Pa, O, AP, L, V, N, M) Strong Christian, moral worldview of helping friends, loving friends, wishing them Godspeed, coming to their aid in times of trouble, helping them to stop bad people, and helping them overcome their past failures and their personal fears, plus hero and his friends stand up to bad, arrogant, power-hungry people and a brief historical reference to Jesus Christ and how He positively inspired Western Civilization and its history and heritage, including that of the United States, and some light references to Egyptian pagan occult/magical mythology, but that ancient mythology also shows signs of being influenced by the historical ethical monotheism and proto-Christian theology of the earliest Hebrew Scriptures, including the Books of Genesis and Exodus and the knowledge and understanding of God that Adam and Eve and their descendents had, a throwaway negative line is made about Americans, and hero extols doing the things you love with the people we love; three or four “d” words and five light profanities; light comic, slapstick and action violence includes man slapped several times, monkeys slapped several times, punching and fighting, character accidentally bumps his head and falls, tiny spears stab large feet, bad guys chase people, villain threatens to smother tiny man in large hourglass running full of sand, plane crashes through window and lands with a crash, soldiers from a Hell-like underworld have bird heads, and dinosaur skeleton scares jaded teenage boys; no sexual content or immorality but light kissing, romantic attraction and statue come to life shows off muscles for lady statue in a robe; upper male nudity on large statue and upper and rear nudity on boy child statues looking like winged cherubs or Cupid; no alcohol; no smoking; and, historical characters and wax figures come magically to life through the mystical power of an Egyptian tablet, hero steals guard’s badge to get into closed storage area to save his friends, movie extols Amelia Earhart accomplishments as a female pilot and as an inspiration to ethnic minorities who want to become pilots too, and cherub-like sculptured child statues with wings are referred to as “gods of love” but that seems to be a cultural, artistic reference, not an actual religious one.

BATTLE OF THE SMITHSONIAN, the NIGHT AT THE MUSEUM sequel, is a charming, funny, creative family movie. Some fans of the first movie may not find it quite as delightful and surprising, but it is a fun family adventure sprinkled with a dash of romance, witty humor and excellent special effects. One scene, however, contains several light profanities that may bother some media-wise viewers. Also, an important story element involves a mystical, magical Egyptian tablet that brings historical characters, wax figures and art works to life.

The story opens with Larry Daley, the night guard played by Ben Stiller, enjoying great financial success as the inventor of Daley Products, a series of infomercial products. Larry has just finished his latest invention, a glow in the dark flashlight, but something is missing in his life. His dissatisfaction leads him back to his old haunt, the Museum of Natural History.

Larry is sad to discover that the museum is mothballing his favorite exhibits, and some of his dearest friends, including Jedediah the cowboy, Octavius the Roman general, Zander the monkey, and Sakajawea. The exhibits are off to be stored underneath the Smithsonian Institute in Washington, D.C.

One night, Larry receives a frantic distress call from Jedediah. Zander took the tablet that makes the exhibits come alive, and now the Egyptian ruler, King Kahmunrah is threatening Larry’s friends to hand it over. The king is in a very nasty mood after 3,000 years of slumber.

[Spoilers may follow] Larry rushes to Washington to help his friends. There, below the Smithsonian, he discovers that Kahmunrah has joined forces with Ivan the Terrible, Napoleon Bonaparte and Al Capone. They plan to use the magical tablet to awaken a demonic army from the underworld and rule the world. It’s up to Larry and his friends, which now also include General George Custer and Amelia Earhart, to stop them. Along the way, they get help from the Abraham Lincoln statue in the Lincoln Memorial, the Tuskegee Airmen and some tiny Albert Einstein bubblehead dolls.

This NIGHT AT THE MUSEUM sequel takes off right away with Larry getting the frantic call from Jedediah and rushing off to the Smithsonian, only to find himself surrounded by the spears of the Egyptian king’s soldiers. General Custer rides to the rescue but accidentally knocks himself out. Larry keeps running while carrying the tablet and that’s when he joins forces with Amelia Earhart. A series of captures and clever escapes follows, leading to a big fight. Along the way, the evil king captures Jedediah and threatens to suffocate him in a large hourglass if Larry can’t kind the key combination to help the king unleash the demonic army from the underworld.

The sheer adventure in BATTLE OF THE SMITHSONIAN is spurred by lots of imagination. Many of the special effects are amazingly detailed and memorable. They bring the history and art at the Smithsonian to wonderful life.

Also, the cast does an excellent job. Ben Stiller as Larry is not the most handsome guy in the world, but he has an appealing charisma. Ditto for Owen Wilson as Jedediah. Lovable Amy Adams joins the cast as the spunky Amelia Earhart. And, Hank Azaria is hilarious as King Kahmunrah, adopting a pronounced Boris Karloff lisp. (Of course, Mr. Karloff starred in the original version of THE MUMMY, so this is a fond, and long overdue, contemporary homage to a beloved actor from the Golden Age of Hollywood.)

The same filmmakers who created the first NIGHT AT THE MUSEUM have sprinkled their new movie with lots of humor and romance. At the press screening, some viewers were enthralled with practically all of the movie’s humor and romance while other viewers thought some of those scenes and dialogue slowed down the story a bit.

Overall, however, the new movie has plenty of adventure, humor and romance to delight all but the most curmudgeonly moviegoers. Best of all, the movie makes history exciting again. And, it has lots of positive messages for audiences, including a couple positive references to God and one positive historical reference to Jesus Christ, which, though slightly hidden, is an important historical point that Christians need to emphasize more often as they witness to non-believers. Such religious references should remind us all not only of the Christian heritage that positively inspired Western Civilization and its history, including the history of the United States, but also that it is in God we should trust, no one else.

Another message of the movie overtly suggests that the key to personal happiness is doing the things we love with the people we love. That message could be given an inappropriate spin, but it is immediately followed by a joke. So, MOVIEGUIDE® advises viewers not to let that message take away from their duty to lovingly serve God through Jesus Christ.

Finally, though the movie casts General Custer in a comical light as a somewhat bumbling figure, Larry gives the character a touching pep talk at a crucial moment. Like other scenes in the movie, that scene gives this sequel a bright, endearing quality. It also shows us that we can overcome our past failures if we move past our fears of failing again. Of course, that is much easier to do with God than without Him.

Overall, MOVIEGUIDE® advises caution for brief foul language and a few of the other supporting elements mentions mentioned in our CONTENT section summarizing the movie’s content.

Rent or Buy NIGHT AT THE MUSEUM: BATTLE OF THE SMITHSONIAN: