"Very Effective, But Disturbing and Excessive" 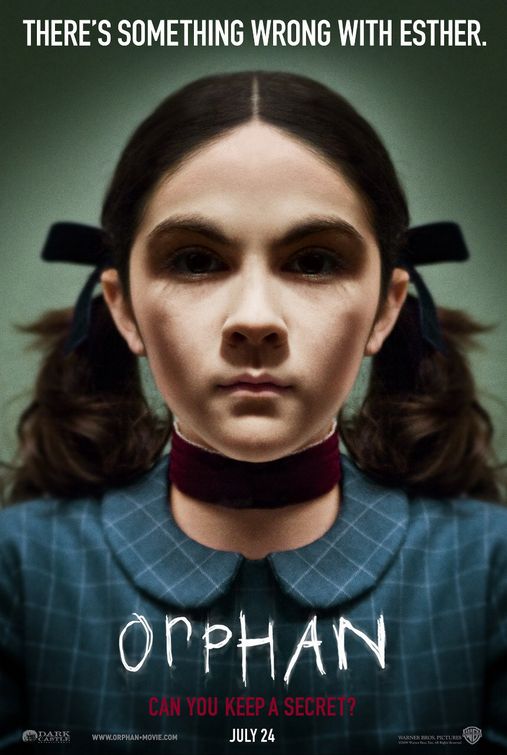 ORPHAN opens with Kate and her husband, John, wanting to adopt a girl to replace their Jessica, who died in Kate’s womb. Kate has doubts. Her doubts disappear when they meet prim but talented Esther, a 9-year-old orphan from Russia. They adopt Esther through a Catholic orphanage for young girls. Soon, viewers learn that Esther is hiding things from Kate and John. Also, the children at school mock Esther’s prim demeanor, which leads to tension between her and Kate’s son, who’s slightly older. As the mysteries about Esther pile up, Kate brings her concerns about the child to the head nun, Sister Abigail. Esther becomes worried about being taken away. So, she kills Abigail and forces Kate’s younger deaf daughter to help her cover up the murder. Some family secrets come out. This leads leading to a wild, violent finish and the crazy, disturbing revelation about Esther’s true identity.

ORPHAN succeeds extremely well in putting moviegoers on the edge of their seats and getting them involved in the mother’s sympathetic plight. However, it contains strong violence, plenty of foul language, some sexual content, and other elements that are disturbing and/or excessive.

(BB, Pa, CC, Ab, LLL, VVV, SS, NN, AA, D, MM) Strong moral worldview with slightly mixed pagan elements about a mother defending her children against a menacing serial killer posing as someone else, with overtly positive, strong depiction of Catholic nuns who run an orphanage for girls, but villain pretends to pray and carry Bible; 17 obscenities (nearly all “f” bombs), one strong profanity and 15 light profanities such as My God; very strong, sometimes bloody violence includes nightmare scene of a bloody birth, girl pushes other girl off jungle gym, girl pushes little girl in front of car and car careens off road, paintball pellet hits pigeon and it falls, girl bashes injured pigeon with rock to put it out of misery, girl bashes nun’s head several times with hammer to kill her, girl threatens little girl and boy, girl threatens to play Russian roulette with little girl to scare her into keeping quiet, arson, boy falls from treehouse, man stabbed to death, girl fires gun at people, little girl fires gun at villain, people fall into icy water, girl tries to smother unconscious boy to death in hospital, woman slaps girl in anger when she thinks girl may have killed her young son, woman falls through glass roof, and character kicked in head which snaps neck; depicted sex between married couple, implied oral sex between married couple, passionate kissing between married couple, married man flirts with another woman while they visit playground with kids, and girl is sexually precocious in scene with drunken adoptive father but things are not what they seem; upper female nudity when boys secretly look at nude photos in magazine in treehouse, upper male nudity and married woman in bra and panties; alcohol use and reference to alcoholism and drunken episode; smoking; and, insanity, temper tantrums, rude behavior, lying, family’s troubled past revealed, deceit, and covering up a murder.

ORPHAN succeeds extremely well in putting moviegoers on the edge of their seats and getting them involved in what’s happening on the big screen. There are some moral and theological problems, however, that undermine these efforts and that will turn off a broader audience. Those problems include the movie’s R-rated content.

The movie opens with Kate, the mother of a young deaf girl, Max, and an older son, Daniel, having a bloody nightmare of the stillborn birth of her late daughter, Jessica. Kate and her husband, John, want to adopt a girl child, but Kate is having doubts. Her doubts disappear when they meet prim but talented Esther, a 9-year-old orphan from Russia. They adopt Esther through an orphanage for young girls run by Catholic nuns.

Soon, however, viewers learn that Esther is hiding things from Kate and John. Also, the children at school mock Esther’s prim and proper demeanor, including her habit of carrying a Bible. Furthermore, the friends of Daniel, Kate’s son, tease him about Esther. And, Kate catches Esther doing strange things and lying. Consequently, tension develops between Daniel and Esther, and Kate and Esther, but Esther goes out of her way to butter up John.

As the mysteries about Esther pile up, Kate brings her concerns about the child to the head nun, Sister Abigail. Esther gets worried about being taken away, and kills Sister Abigail in front of Max while forcing Max to help her cover up this vicious crime.

Amidst all the tension these things bring, viewers learn that Kate became an alcoholic in the wake of her child’s death, which led to a near fatal accident with Max at the nearby pond. Viewers also learn that John confessed two years ago to Kate that he had had an affair 10 years ago.

ORPHAN plays like FATAL ATTRACTION, the infamous and very popular movie featuring a wife defending her family from the crazy woman that her husband slept with and then abandoned. Like that movie, it is up to the mother, Kate, to defend her family, especially her two children. Also like that movie, ORPHAN delivers the goods when it comes to thrills and chills, even though some of the scary moments rely on jump scenes rather than true suspense (which would be more effective).

Regrettably, however, like FATAL ATTRACTION, ORPHAN is rated R. Thus, it includes very strong violence and plenty of strong foul language, including multiple uses of the “f” word. There is also strong, but brief, sexual content, plus some lighter (and briefly disturbing) sexual references. This disturbing content includes a scene where Esther makes a dress for herself out of one of Kate’s fancy dinner dresses and puts make-up on to seduce John. Not everything is as it seems in this scene, however, which reveals the deep, startling secret Esther has been hiding from everyone, including the orphanage nuns. The revelation of Esther’s secret lets the movie get away with flirting around with some very disturbing content.

Thus, although ORPHAN succeeds brilliantly in making viewers root for the commendable mother defending her two children, it contains very strong violence, plenty of foul language, some sexual content, and other elements that are disturbing and/or excessive.

Editor’s Note: Some adoption agencies have complained about the movie’s depiction of orphaned children waiting to be adopted, but it’s really only the one character who is demented and she’s not really an orphan. So, it’s not really fruitful to attack Hollywood for making one popcorn movie that seems to paint a dark picture of orphans and adoption, unless, of course, it starts making a bunch of them. It would be nice, however, if Hollywood did make a bunch of movies painting a positive, uplifting picture of adopting orphans. Also, putting young child actors in such a disturbing story as this one is highly questionable, needless to say.