"Earthly Stories with a Heavenly Meaning" 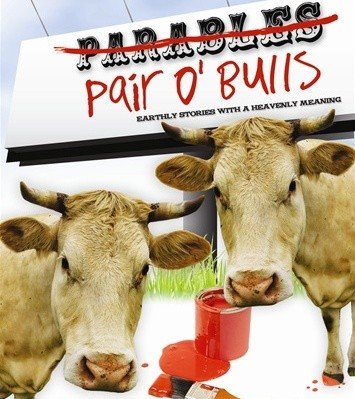 PAIR O’ BULLS is a simple and fun video series for pre-school children in Sunday School with a very strong focus on the teachings of Jesus Christ’s parables. The eight 15-minute lessons each focus on a different parable and are broken up into four sections: Sing This, Picture This, Do This, and Hear This. The lessons include a sing-along song with Jana about the depth of God’s love and an animation and narration of one of Jesus’ parables. Also joining Jana and her friend Natalie are also their puppet friends, Myron and Sharky, to share the Bible verse and the application of the word of the day as well as a song and a joke.

PAIR O’ BULLS is generally well except for a few editing mistakes. Some Bible verses shared with the children are too watered down. The simplification possibly affects the verse’s meaning for the young viewers and leaves less room for the work of the Holy Spirit through that verse. Otherwise, the series acts as an edifying tool for the spiritual growth of young children through the parables of Christ and lessons in line with His character.

(CCC, BBB, V, M) Very strong Christian, biblical worldview going through eight of Jesus’ parables as well as children’s songs and other lessons about moral behavior; no foul language or profanities; one mention of violence in the story of the good Samaritan when the Jewish man gets beat up, the act is not shown, but the animated character is later seen with scrapes and bruises; no sexual content or nudity of any kind; no alcohol; no smoking or drug use; and, very light miscellaneous immorality mentioned in parables such as a man refuses to forgive a debt and gets thrown in prison.

PAIR O’ BULLS is a fun and educational Sunday School curriculum with a very strong focus on teaching children the morals Jesus lined out for us through his parables. It does so through eight lessons each divided into four sections: Sing This, Picture This, Hear This, and Do This.

In Sing This, children are invited to sing and dance along with Jana Alayra about the infinite nature of God’s love in the song “Dig Down Deep.”

Jana introduces the lesson’s main moral in Picture This along with her friend Natalie who desires to be as helpful as she can, often leading to a minor disaster which Jana readily forgives. Both Jana and Natalie exude positive attitudes and excitement, and they execute the morals taught in the parables with joy. Jana then narrates a parable of Jesus accompanied by an animated visual.

Hear This is a segment hosted by a puppet shark named Sharky. Sharky, along with his animated shrimp friends, sings his Sharky theme song, tells the children a cow joke, and shares a Bible verse relating the lesson’s parable. The only notable complaint with this episode lies in the Bible verse reading given by Sharky. The verses are very watered down, in some instances to the extent that it changes the tone and intention of the verse. Seeing as the verses chosen are already short verses, they should perhaps give the children the whole version and trust in the discernment of the Holy Spirit as well as the strong telling of the parable to penetrate the children’s hearts with the Scripture.

In the segment entitles Do This, Jana gives the children a word of the day such as love or joy. The puppet Myron the rat and his two stick puppet cow friends then discuss the application of the word of the day in practice and spiritually. Myron often points to Christ as the reason for their strive toward moral treatment of others. Jana then ends the segment with the song “Dig Down Deep.”

The narration and visuals in PAIR O’ BULLS are very age appropriate for the intended audience of children age 2 to kindergarten. The story is simplified to understanding level of the children without watering down the intended message. The animation is most often one or two still pictures depicting the story. The movement within the pictures – change of focus and zoom – is satisfactory to hold the attention of a young child.

PAIR O’ BULLS is generally well made as a Sunday School series except for a few minor mistakes in editing. The series’ thorough yet understandable telling of Christ’s parables along with the enthusiasm of the characters provides Sunday School teachers with a simple, useful, edifying tool to share the will of Christ with children.

Runtime: 8 segments about 15 minutes each