"What Would You Do If You Were Stuck on a Spaceship Alone?" 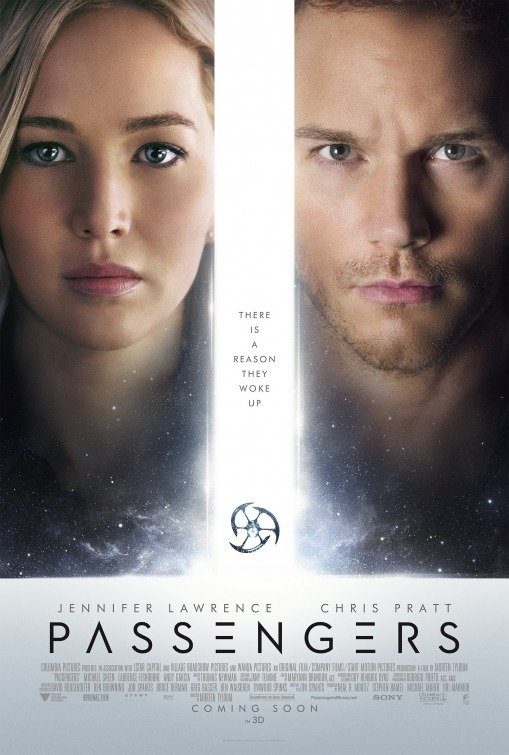 In PASSENGERS, a spaceship carrying 5200 people aboard is traveling to a planet that’s already being colonized. Because it takes 120 years to get to the planet, all the humans on board are in a hibernation sleep. A malfunction wakes up Jim 90 years too early. He’s faced with the idea of living the rest of his life alone on the ship, so he makes a poor choice and also wakes Aurora, a woman he thinks he likes. Eventually, the two do fall in love. However, more problems with the ship threaten the lives of everyone on board. Also, the lie Jim kept from Aurora threatens their relationship.

PASSENGERS presents a compelling human story filled with romance, and a science fiction twist about making the right choices. Jim and Aurora are interesting characters, but they aren’t the most convincing of couples. PASSENGERS has a mixed pagan worldview where Romantic elements are combined with some moral, redemptive themes promoting sacrifice and forgiveness. PASSENGERS has very little foul language, but it contains too many bedroom scenes and partial nudity. So, MOVIEGUIDE® advises extreme caution.

(Pa, RoRo, BB, C, Acap, Cap, L, VV, SS, NN, AA, M) Light mixed pagan worldview with strong Romantic elements where finding a romantic partner to love is purpose enough for life, mixed with some strong moral and light redemptive elements extolling sacrifice, love, forgiveness, making better moral choices, and a positive hint toward marriage, plus woman makes an anti-capitalist remark about a company, but a man defends the free market with a positive response; five mostly light obscenities (one “s” word); moderate action violence, such as woman punches and kicks a man, jeopardy in space as characters try to keep their spaceship from exploding, intense action, a bolt flies into a woman’s arm, a character dies; strong sexual content with three bedroom scenes that last about five to 10 seconds each, with nudity (minus sensitive areas), plus man and woman kiss many times; woman is seen naked a couple of times from the back and the side with the most sensitive areas barely obscured by lighting, rear male and female nudity, upper male nudity; moderate drinking and drunkenness; no smoking or drug content; and, man lies and selfishly alters another person’s life.

PASSENGERS is a science-fiction movie starring megastars Chris Pratt and Jennifer Lawrence with action, romance and lots of space.

Set sometime in the distant future, the Homestead is a spaceship on a 120-year journey to a new, already colonized planet. Since the ship is filled with 5000 passengers and 200 crewmembers, the only way to make the journey is to be put into hibernation capsules that wake everyone up months before the ship arrives at the new planet.

When Jim (Chris Pratt) wakes up, he thinks they’re nearly at their destination, but he grows concerned when he realizes no one else is awake. He finds out his sleep pod malfunctioned, and he woke up 90 years early. Jim, who was a skilled handyman back on Earth, does everything he knows to do to send out a message for help and try to go back into the hibernation capsule, but nothing works.

More than a year passes, and Jim, who’s really let himself go, is on the brink of insanity. After nearly killing himself by jumping out into space, Jim stumbles upon a beautiful woman in a sleep pod named Aurora (Jennifer Lawrence). He researches Aurora on the ship’s database and finds video interviews of Aurora. She turns out to be a writer who’s making the long journey so she can find something interesting to write about later.

Jim begins to fall in love with Aurora. Over conversations he has with a robot bartender played by Michael Sheen, he grapples with the temptation of hacking into Aurora’s pod to wake her up so he isn’t so lonely. Jim fights the temptation, but eventually relents and wakes her up.

Aurora believes her pod malfunctioned just like Jim’s, and does everything she can to try to get her life back, but eventually, she too must accept her fate. After some time, Jim begins to woo Aurora, and the two begin a passionate romance. They even become happy. However, this happiness is short lived when Aurora finds out Jim woke her up.

Meanwhile, the other things around the ship start malfunctioning. It’s revealed that the whole ship is in danger, and Jim and Aurora are the only ones that can find the problem and fix it before they all die. Can Aurora forgive Jim for his horrible mistake?

PASSENGERS presents a compelling human dilemma with romance, and a science fiction twist about making the right choices and finding meaning and purpose in life, even if you won’t have contact with other human beings for the rest of your life. As played by Pratt and Lawrence, Jim and Aurora are interesting characters, but they aren’t the most convincing of couples. So, the relationship comes off as manufactured. By the end, however, most viewers will care enough about them that they’ll want them to be together.

The amazing sets in PASSENGERS have scope and depth, and the visual effects are stunning, making this one of the prettiest science fiction movies of all time. The fantastic composer, Thomas Newman, adds beautiful themes for the story’s moments of romance and excitement. However, he includes too many similarities to his score for SAVING MR. BANKS. In the end, PASSENGERS provides strong popcorn entertainment, but it could be better.

The worldview of PASSENGERS isn’t on the nose. At its core, though, despite some strong Romantic elements, it acknowledges the importance of making moral choices and posits the idea that a life of simply loving another person is a life well lived. It also touches on the fact that, in an age where everything is replaced instead of fixed, there’s value in being a fixer and a builder. Even better, the movie has elements of sacrifice, forgiveness and even positive hints towards marriage.

PASSENGERS has very little foul language, but it contains too many bedroom scenes. In three different instances, viewers see sexual activity between Jim and Aurora (ranging 5-10 seconds each), with partial nudity that makes one question how this movie is rated only PG-13. Ultimately, because of this problem, MOVIEGUIDE® advises extreme caution for PASSENGERS.