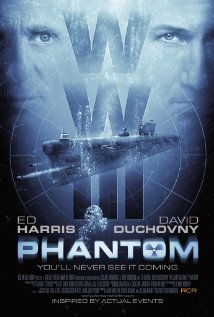 PHANTOM is a truly riveting submarine thriller set during the 45-year Cold War between the Union States and the Soviet Union. A Russian submarine captain taking one last trip in 1968 has his boat commandeered by KGB extremists. The extremists are testing a machine that will make all Soviet submarines undetectable. They plan to use the machine to start a nuclear war between China and the United States. The machine will make the sub appear to the Americans as a Chinese vessel when they fire its nuclear missile. The captain’s Christian conscience is outraged by this plot. Can he and his officers stop the attack?

PHANTOM is very well written and directed. The dialogue is superbly realistic. The acting is excellent, and the tension is excruciating. PHANTOM is a superb thriller with overt Christian content. Also, communism is seen as the failed ideology that it really is. There’s some strong foul language, however, and an off-color moment at a party. Otherwise, PHANTOM is well worth seeing. The subject matter may not attract a huge audience, but PHANTOM opens in many theaters.

(CC, BB, ACAC, P, LL, VV, S, AA, D, M) Strong Christian, moral worldview with some strong anti-communist content along with Russian submarine captain defends the goodwill of Americans during argument with KGB villain; 14 obscenities (including one “f” word and a few “s” words) and two strong profanities; some strong tense violence with some blood includes men are shot, villains shoot about three men in chest, villain slits one man’s throat but there’s no gruesome close-up, protagonist’s boss commits suicide from a distance as submarine leaves port, man suffers epileptic seizure, some torpedoes explode, submarine captain has to disable another submarine in his fleet, and some fighting and threats occur; no explicit sex but man drinks a shot glass of vodka placed in a woman’s cleavage during a party and newlyweds kiss at their brief wedding; no explicit nudity but some female cleavage in a brief party scene; alcohol use and some sailors appear inebriated at brief party scene; some smoking and man in Soviet navy takes medication pills for his epilepsy; and, villain has a secret plot to start a nuclear war, military protagonist wonders if he and his boss can find redemption for what they’ve done and boss doubts if they can, and boss commits suicide out of despair, but protagonist becomes a true hero.

PHANTOM is a truly riveting submarine thriller set during the 45-year Cold War between the Union States and the Soviet Union. There’s some foul language and an off-color moment, so caution is advised. Otherwise, however, PHANTOM is an excellent movie with overt Christian content and values and a slam-bang ending.

The movie begins in 1968 with Soviet submarine captain Demi (Ed Harris) being ordered to take out a different submarine, a diesel, right after a lengthy just-ended previous assignment. Demi finds out that a few of his sailors, the ones who couldn’t make the boat, have been replaced with some KGB officers led by a hard-nosed man named Bruni (David Duchovny). Bruni has secret orders, which will be opened once the boat gets out to the Pacific.

When they open the orders, Demi and his officers discover they’re supposed to test a new machine, called Phantom, that will render all Soviet submarines undetectable. The tests involve some dangerous drills that cause more friction between Demi and Bruni. Demi is a man with a conscience while Bruni is all about his communist ideology.

The situation completely unravels when Demi learns that Bruni and Bruni’s men are part of a group of KGB extremists who want to start a nuclear war between China and the United States. Demi and his officers try to stop them, but Bruni’s men take over the submarine. They don’t know, however, that one of Demi’s officers is trying to disarm the nuclear missile Bruni plans to use. Can Bruni be stopped in time?

PHANTOM is very well written and directed. The dialogue is superbly realistic. The acting is superb. Ed Harris, David Duchovny and the rest of the cast are excellent. Also, the tension is ratcheted up to a fever pitch. Best of all, the captain’s lapsed Christian faith is reawakened by his conflict with the KGB extremists. Early on in the movie, he witnesses a small church wedding for his youngest officer, who gets married on the spur of the moment because of the sudden new assignment. The priest challenges the captain to keep on talking to God. Later, a crucial scene with the KGB zealot reveals that the captain still wears a crucifix. In another scene, the captain defends the goodwill of the Americans, saying that they would never use their “first strike” nuclear capability because, unlike the KGB’s communist extremists, they value individual life.

All in all, PHANTOM is a superb edge-of-your-seat thriller. The subject matter may not attract a huge audience, but it’s well worth seeing and it opens in a lot of theaters. That said, caution is advised due to some strong foul language and a brief off-color moment at a party.