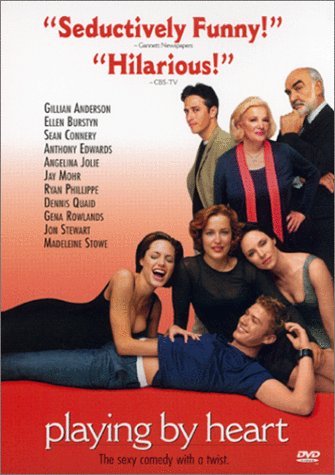 PLAYING BY HEART is a richly textured, charming, ensemble-cast movie that explores relationships, with a positive message that staying together in a committed relationship can be enriching and fulfilling. With no less than 11 outstanding characters, this movie examines love, commitment, infidelity, and more, but contains several obscenities, depicted adultery that is rebuked and implied fornication.

PLAYING BY HEART is a richly textured, charming, ensemble-cast movie that brings to mind comparisons with Robert Altman’s works, such as NASHVILLE and SHORTCUTS. Director Willard Carroll introduces us to no less than eleven outstanding characters. While viewers may initially find the onslaught of so many characters daunting, Carroll manages to make them compelling and bring them all together in a tour de force ending. This is truly astounding from a writer/director best known for his made-for-TV children’s movies and a small horror picture, THE RUNESTONE.

The story opens with an assured hand taking the audience through six different dramas seamlessly. The cornerstone of the ensemble cast is an older married couple, played flawlessly by Sean Connery and Gena Rowlands as Paul and Hannah. Although humor and tenderness punctuate their relationship, Paul is dying of a brain tumor. Adding to the stress, Hannah finds the picture of a woman with whom Paul had an extramarital fling 25 years earlier. The photo lies near Paul’s Last Will and Testament.

Meanwhile, Gillian Anderson plays Meredith, a stage director who has serious commitment fright that is chipped away by Trent, played with aplomb by comedian Jon Stewart. Also, Ellen Burstyn, playing Mildred, a mother tending to her dying homosexual son Mark (Jay Mohr), tries to abide by his wish to not live with delusions about the past or present. Anthony Edwards plays Roger, a man only introduced as the adulterous lover of Madeline Stowe’s, Gracie.

Perhaps the most charming of the tales is that of Joan (Angelina Jolie), a brassy but intelligent young actress who is dumped by her boyfriend over the phone in a bar. Offered quarters by a good-looking but aloof young man named Hugh (Ryan Phillippe), Joan is smitten.

Seemingly unconnected, these well-written and well acted stories are pulled together in a surprisingly satisfying ending. Wonderful camera work and the subtle but always moving score assists Carroll. The strength of the performances linger long after the movie ends.

Moral disappointments in PLAYING BY HEART include the adultery and fornication and the fact that the ending reveals that one of the adulterers is a minister. The movie’s point of view is that infidelity is wrong, but premarital sex is normal. The audience goes through Paul and Hannah’s painful struggle of rehashing his infidelity a quarter century before, but Paul whispers to his wife about his children’s relationships, “If only they knew what we know…then it would seem all too easy.”

This movie was almost called IF THEY ONLY KNEW and DANCING ABOUT ARCHITECTURE. The last title comes from a line Angelina Jolie repeats that talking about love is like dancing about architecture, but it doesn’t stop her from trying. This sums up the movie’s whole premise, that while relationships are unpredictable and difficult, staying together in a committed relationship enriches and fulfills life.