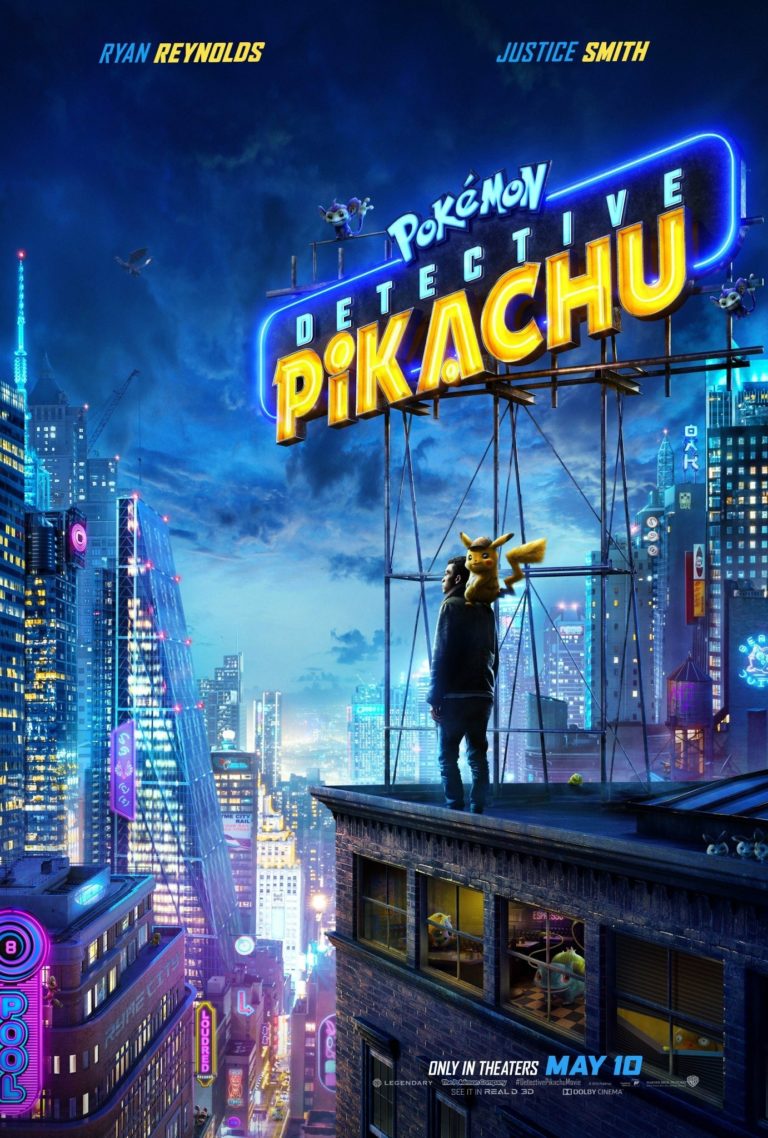 POKÉMON DETECTIVE PIKACHU is a funny fantasy adventure with lots of action, set in the world of the Japanese “pocket monsters” craze. A young man named Tim investigates the mysterious death of his estranged father, a police detective who works in a specially designed city where Pokémon creatures live in harmony with humans. Tim teams up with his father’s Pokémon partner, a cuddly, talkative yellow creature named Pikachu. Surprisingly, Pikachu can talk English, but only Tim can understand him. Their investigation leads to a nefarious plot to control the magical abilities of the Pokémon.

DETECTIVE PIKACHU is funny and exciting adventure. The special effects are first rate. Also, the plot has some surprising twists in the final reel that add to the entertainment. The most inspiring part of DETECTIVE PIKACHU is the father-son dynamic. Although Tim and his father are estranged from one another, there’s a happy resolution to that dynamic. DETECTIVE PIKACHU is mostly family friendly. However, the movie contains some magical creatures, a couple light innuendoes, intense action, and brief foul language that warrant caution for older and younger pre-teenagers.

(BB, O, FR, Ev, L, VV, S, DD, M):
Dominant Worldview and Other Worldview Content/Elements:
Strong moral worldview that depicts an estranged father-son relationship that has, however, a positive resolution that’s pro-family, plus there are other pro-family moments and the heroes are trying to stop a nefarious and evil plot, and strange and funny magical creatures/animals become pets and friends to humans (one such magical creature has the power of telepathy and seems to be able to manipulate reality), and there’s brief talk that some of the magical creatures are able to “evolve” into more powerful magical creatures, and the villain wants to use science to manipulate that “evolution” for his own nefarious purposes
Foul Language:
One “d” word, two “h” words and four light profanities (such as OMG)
Violence:
Strong and light action violence includes pretty violent car crash shown more than once, and in one repeat a man and a creature are shown crawling away from the crashed car, scary dragon creature tries to attack a little creature and humans and eventually goes berserk when it’s exposed to a purple gas meant to drive the creatures in the movie berserk, young man and little yellow creature are chased and attacked by little purple creatures with teeth who’ve been exposed to the berserk gas, large creature trapped in large glass ball in a lab smashes the glass and destroys the lab and knocks some people around (it’s vaguely implied though not shown that some of the people are killed), people and creatures fall from great heights but not to their deaths, two people and a little creature frantically run away when two large magical turtle creatures with massive landscapes on their shells start to trash the countryside, people and creatures are knocked about during a final battle, character hangs by their hands on a high ledge while a small creature bangs on their fingers to make them fall to their death, fighting between humans and creatures with evil intent, etc.
Sex:
No sex scenes but a couple light innuendoes for comical purposes
Nudity:
No nudity
Alcohol Use:
No alcohol use
Smoking and/or Drug Use and Abuse:
No smoking but the villain has developed a purple gas to drive magical creatures berserk so they cause chaos that benefits the villain; and,
Miscellaneous Immorality:
Father and son characters are estranged, but that’s resolved in a positive way by the end.

POKÉMON DETECTIVE PIKACHU is a funny fantasy adventure with lots of action, set in the world of the Japanese “pocket monsters” craze, where a young man investigates the mysterious death of his estranged father, a police detective, with the help of his dad’s partner, a cuddly, talkative yellow Pokémon creature named Pikachu. DETECTIVE PIKACHU is mostly family friendly entertainment, with a strong father-son story that’s poignant, but there are some magical creatures, a couple light innuendoes, intense action, and brief foul language that warrant caution.

The movie opens with a large Pokémon creature called Mewtwo that escapes a mysterious lab in the countryside and, using its magical abilities, apparently flips over a car that’s speeding away from the lab. Cut to a young man, Tim Goodman, who learns that his father died in the car crash. Tim’s father, Harry, was a detective in Ryme City, a sanctuary designed by a rich billionaire named Howard Clifford where Pokémon creatures can live in harmony with humans, without any Pokémon battles. Pokémon creatures trained by humans fight each other using their magical powers. On a simple level, the Pokémon creatures are like modern Japanese versions of magical fairy tale creatures in Western folklore.

Tim travels to Ryme City to get his father’s personal effects. After Tim’s mother died when he was 11, Tim and his father became estranged, especially after Tim’s father took the detective job in Ryme City. Tim refused to visit his father, because he thought his dad cared more about his job than he did about Tim.

In his father’s apartment, Tim runs into Pikachu, a cuddly-looking yellow Pokémon creature who claims to have been his father’s partner on the police force. Unexpectedly, Tim discovers he can understand what Pikachu is saying in English. Except for Pokémon creatures with telepathy abilities, humans only hear the goofy animal sounds that come from a creature’s lips. Usually, Pikachu creatures can only be heard saying, “Pika! Pika!”

Tim and Pikachu team up together to investigate the car crash and, hopefully, cure Pikachu’s amnesia and find Tim’s father. Their investigation leads to a nefarious plot by someone in Howard Clifford’s company, the company that created Ryme City, to manipulate the DNA of powerful Pokémon creatures for an unknown purpose. Tim and Pikachu get help from a female TV news intern who wants to be a TV news reporter.

DETECTIVE PIKACHU is funny and has lots of exciting adventure. Most of the comedy comes from the dialogue coming out of the mouth of Pikachu, who’s voiced by Ryan Reynolds of the comical DEADPOOL superhero movies. Both Reynolds and Justice Smith, the young actor playing Tim, do a good job. The plot has some surprising twists in the final reel that add to the movie’s entertainment value. Also, the interaction between the Pokémon creatures and the live action human characters is pretty amazing and rather seamless. So, the special effects in DETECTIVE PIKACHU are top notch and sometimes even spectacular.

The most inspiring part of DETECTIVE PIKACHU is the father-son dynamic in the movie. Although Tim and his father are estranged from one another, there’s a happy resolution to that dynamic. Also, a few times during the movie, Pikachu and the father’s boss, played by Ken Watanabe, assure Tim that his father really loved him. Also, as the movie plays out, it’s clear that Tim loved his late mother and loves his grandmother, who took care of him after Tim’s mother died. Tim and Pikachu team up to stop an evil plot, so the movie also is about risking your life to fight evil and doing the right thing.

That said, DETECTIVE PIKACHU has some elements that warrant caution. For example, there’s lots of action with some intense jeopardy. Also, of course, the story is about the friendship human beings have with the magical creatures they call Pokémon. The creatures have magical powers such as electrical shocks, water attacks, explosions, shape-shifting, telepathy, healing abilities, etc. The good news, however, is that, for the most part, the Pokémon creatures are not as dark as the typical creatures, spirits, demons, and ghosts populating Japanese folklore, which has been influenced by Buddhism, animism, pagan superstition, and Taoism (some supernatural characters in Japanese folklore have some “good” traits and some are “trickster” characters who create comical chaos, just as Bugs Bunny did).

Finally, there’s some brief talk in DETECTIVE PIKACHU about the ability of some magical creatures to “evolve” into more powerful Pokémon. The movie’s villain is experimenting on Pokémon creatures to manipulate their DNA and their “evolution,” for his personal malevolent purposes. He’s also created a gas that makes the creatures go berserk. The movie also contains a few brief comical innuendoes and several relatively light obscenities and profanities.

Ultimately, DETECTIVE PIKACHU is very entertaining, but caution is advised for younger and older pre-teenagers.