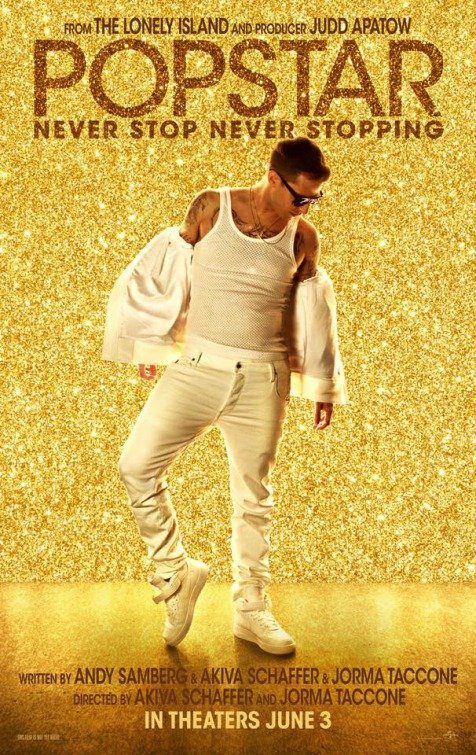 POPSTAR: NEVER STOP NEVER STOPPING is a mockumentary about a Justin Bieber type pop singer. The movie follows the story of Conner, the breakout member of a vocal group called Style Boyz, a cluelessly obscene combination of the Beastie Boys and Backstreet Boys. After the group breaks up, Conner decides to make his new songs have social relevance even though he’s a classless nitwit. Things get worse as Conner’s album tanks, his ticket sales fade and his manager brings in an extremely aggressive rapper who becomes more popular. Conner’s life spirals further out of control. Can he ever get the magic back?

POPSTAR perfectly mimics the deluge of stupid celebrity-worshipping shows filling way too much of the TV dial. The movie zips along, tearing through an array of dirty yet sometimes funny song lyrics and outrageous escapades before inserting some depth and humanity in the final act. However, the positive redemptive, moral ending comes too little, too late. In fact, POPSTAR has abundant foul language, lewd content and drug humor. POPSTAR is too excessively crude and raunchy to entertain moviegoers properly.

(RoRo, PaPa, C, B, Ho, LLL, VV, SS, NNN, AAA, DD, MMM) Strong Romantic worldview showing how fame and fortune can corrupt a person, with strong hedonistic pagan values, mitigated by a redemptive, moral ending showing repentance and forgiveness, plus some support expressed for same-sex marriage; at least 165 obscenities and profanities (including many “f” words); some strong and light comic violence includes a couple of brief fistfights and wild wolves break free from their handlers and attack a group of humans, nearly killing another popstar; numerous jokes and graphic song lyrics about sexual activity, and male protagonist shown in bed with 10 scantily clad women in a music video and boasts in his lyrics that he fornicated with them all at one time; one scene where fans swarm protagonist in a car includes a woman who shoves her bare buttocks and then her bare breasts against his car window and, when he opens his window, a man shoves his genitals through the window until protagonist signs his autograph on them, plus a scene centers on Conner’s concert cape falling off, and it’s revealed his private parts are shaved and tucked between his legs, making it look like he has no male parts, resulting in worldwide embarrassment in Internet photos and videos; a brief scene shows protagonist’s alcoholic mother is wildly drunk; same scene shows mother snorts cocaine before implying she fornicates with a much younger man, plus the members of protagonist’s former vocal group, including him, smoke an enormous amount of marijuana as they make peace with each other; and, excessive pride, lying, Conner steals credit for his friend’s song lyrics, and mean pranks pulled by another rapper.

POPSTAR: NEVER STOP NEVER STOPPING is a mockumentary about a pop singer in the Justin Bieber mold, who betrays the childhood friends in his singing group, then faces a rollercoaster ride of success and failure. A funny, successful parody of today’s obsession with popstars, POPSTAR: NEVER STOP NEVER STOPPING zips along but, despite a positive ending stressing repentance and forgiveness, has a Romantic, pagan worldview marred by an excessive amount of raunchy content and obscene language.

POPSTAR comes from the comedic trio known as The Lonely Island, former “Saturday Night Live” star Andy Samberg and his writer-director partners Jorma Taccone and Akiva Schaffer, in their first attempt at a full-length movie following dozens of creative, popular shorts on that late-night TV institution. The movie follows the story of Conner, the breakout member of a vocal group called Style Boyz, who are basically a cluelessly obscene combination of the Beastie Boys and Backstreet Boys.

While its opening credits give a history of Conner’s rise through his own self-aggrandizing narration and reveal that the Style Boyz broke up in an onstage mid-concert fight, its main events take place as he prepares to launch his second solo CD and attendant concert tour. The problem is, Conner has decided to make his new songs have social relevance even though he’s personally a classless nitwit. So, his debut single has him advocating same-sex marriage, while also repeatedly rapping he’s not gay and winds up drawing embarrassingly bad reviews.

Things get worse as Conner’s album tanks, his concert ticket sales are fading fast, and his manager (Tim Meadows) brings in an extremely aggressive rapper named Hunter as an opening act. The crowds embrace Hunter more than Conner, and Hunter pulls a devastating prank on Conner’s wardrobe that results in a viral-level humiliation. Consequently, Conner’s life spirals out of control. Can he ever get the magic back?

POPSTAR is impressively made, perfectly mimicking the deluge of stupid celebrity-worshipping shows like “E! Hollywood True Story” that fill way too much of the TV dial. Samberg, Taccone and Schaeffer have pulled in one of the most extensive cameo casts in memory, with real popstars like Mariah Carey and Seal used to particularly great effect.

Also, the movie zips along, tearing through an array of dirty yet sometimes funny song lyrics and outrageous escapades before inserting some depth in the final act. In fact, the movie’s last third contains a much-needed shot of sweetness and humanity that helps Conner become more likable.

That said, the positive redemptive, moral ending comes too little, too late to redeem this movie’s overabundance of dirty song lyrics and drug humor, lots of strong foul language and a gross scene involving an extended shot of male genitalia. Thus, POPSTAR is too excessively crude and raunchy to entertain moviegoers properly.