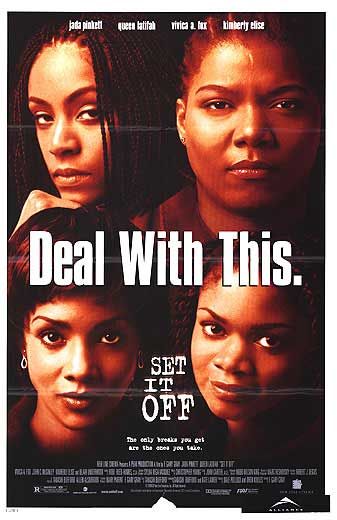 In SET IT OFF, life has taken a wrong turn for four African-American women from the same Los Angeles housing project. This "girlz 'n the hood" drama aspires to turn these women into heroes, making bank robbery glamorous and exciting. Filled with obscenities and violence, it is not a movie for moral Americans.

In SET IT OFF, life has taken a wrong turn for four African-American women from the same Los Angeles housing project. Frankie loses her job because she knows one of the thieves who robbed a bank where she works. Tisean , a young single mother can’t earn enough money to pay a baby-sitter while she works as a night janitor. Stony hopes to sent her younger brother to college, but he is mistaken for a robbery suspect and killed by the police. Cleo, a hard-edged lesbian, is mad at the world. These women decide to “take something back from the system” by robbing a bank themselves, but their final “big score” turns sour.

SET IT OFF aspires to be like THELMA AND LOUISE and turn these women into heroes, but that makes bank robbery glamorous and exciting. Deadly violence is prevalent throughout the film, with several people killed by bloody gunshots. There are also three sex scenes, nudity and marijuana use. Cleo kisses her homosexual lover, who also is seen dancing suggestively in a revealing outfit. Foul language overwhelms, with over 150 obscenities and 50 crudities in addition to seven regular profanities. With its glamorization of criminal behavior and an overabundance of offensive material, SET IT OFF will hopefully disappear in the theaters quickly.