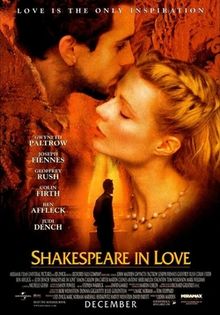 New, smart, bawdy, romantic, and funny, period movie SHAKESPEARE IN LOVE details an imagined experience by the Old Bard himself, which inspires him to write "Romeo and Juliet." Wonderfully acted, expertly directed and containing lavish costumes and set design, this movie is an Oscar contender, but slanders Shakespeare's reputation, character and legacy by turning our greatest writer into an adulterer though this Shakespeare cries out to Jesus Christ for forgiveness.

Have you heard this story before, two lovers separated by wealth, class, rank and duty steal moments of romance until they realize their future is doomed? No, I’m not talking about TITANIC, I’m talking about ROMEO AND JULIET, perhaps Shakespeare’s most famous play.

New, smart, bawdy, romantic, and funny, but morally degenerate, the period movie SHAKESPEARE IN LOVE details an imagined experience by the Old Bard himself, which inspires him to write his most famous piece. Wonderfully acted, expertly directed and containing lavish costumes and set design, this movie positions itself as an Oscar contender. Though it sheds some light on the possible lifestyle of the world famous English author, its basic premise has very immoral implications that slanders Shakespeare’s reputation, character and legacy.

The story of this movie begins in 1593 with the owner of the playhouse, The Rose, Philip Henslowe (Geoffrey Rush), literally having his feet held to a fire by moneylender Fennyman (Tom Wilkinson). Henslowe asks Fennyman for more time to pay off a debt, because his new playwright William Shakespeare is working on a big money-making show, a new comedy called “Romeo and Ethel, the Pirate’s Daughter.” Fennyman relents, but little does he know that Will needs a muse and is suffering a severe case of writer’s block.

Nevertheless, Will, played by Joseph Finnes, brother of Ralph, whips up a few pages and rehearsal begins. A ragtag group of actors arrives, including local favorite, the brash, arrogant Ned Alleyn (Ben Affleck), and a youth named Thomas Kent (Gwyneth Paltrow), a ravishingly beautiful young woman whose real name is Lady Viola and has dressed herself as an adolescent boy. (No women were permitted to act on stage at the time.) Kent performs so well as Romeo that Shakespeare follows him home and discovers that Kent is “friends” with the Lady Viola. Shakespeare becomes instantly smitten with Viola and confesses his love for her to Kent. As the guise falls away, their passion heats up. As their love blooms, “Romeo and Juliet” begins to take shape and the rehearsal continues.

Yet, all is not well. Shakespeare discovers that Lady Viola must marry the insufferable Lord Wessex (Colin Firth) at the command of Queen Elizabeth (Judi Dench). Wessex is an impoverished aristocrat. He will gain money, and Viola will gain class, through a classic marriage of convenience. Furthermore, the Queen’s master of the revels, Sir Edmund Tilney (Simon Callow) has discovered Viola’s deception and closes the Rose Theater, hoping to stop the production of “Romeo and Juliet.” However, competing playhouse owner Burbage offers his Curtain Theater to Shakespeare, and the curtain goes up, with unlikely guests, some sudden cast changes, an unexpected crowd reaction, and unstoppable, unpleasant pressures on the forbidden romance.

SHAKESPEARE IN LOVE is a work of fiction, an examination of what-might-have-been that mixes factual characters with fictional characters, including the Lady Viola herself (though some critics do believe Shakespeare had a flesh-in-blood inspiration for his “dark lady” in his sonnets, and most critics believe that the inspiration was his wife to be). Indeed, it is hard to imagine how Shakespeare could write about such passionate, witty and sometimes bawdy experiences without going through such things himself. At first, this movie seems to trivialize and make light of the Bard in a hip, anachronistic style, but by showing his humble lifestyle and everyman characteristics, the audience comes to appreciate the genius he created out of the challenging conditions in which he worked.

Regrettably, however, SHAKESPEARE IN LOVE has several fatal moral flaws, one of which represents a politically correct attack on the cultural foundations of America’s English, and Christian, heritage, as represented by Shakespeare. First, this movie contains excessive scenes of depicted fornication, with revealing nudity, including two scenes of Sir Tilney in compromising positions with a prostitute. These scenes become even more unsettling when the movie reveals that Shakespeare already has a wife, and children, who live in Stratford. Essentially, therefore, Will’s character in this movie is an adulterer with the Lady Viola. Thus, the movie’s basic premise ultimately trashes the Bard’s reputation and legacy, slandering the moral character of our greatest writer who by the historical record was a devout Protestant Christian. By doing so, SHAKESPEARE IN LOVE also may undermine the fine cultural traditions from England on which Christian America was built. Regrettably, though Viola doesn’t cross-dress for sexual reasons, the camera takes pleasure in showing Shakespeare plant a kiss on Viola while she’s sporting a fake goatee and men’s garments. This is an unnecessary pro-feminist and pro-homosexual element.

Primarily romantic in its themes of forbidden love and breaking cultural taboos, this movie does, however, have one redemptive and poignant moment. Shakespeare misleads Wessex into thinking that it is Marlowe who is having an affair with Viola. When Marlowe ends up dead in a tavern fight, Shakespeare claims responsibility for the death, mourns and repents with loud cries to Jesus Christ for forgiveness. This is a rare recognition of God and His Holy Order in an otherwise hedonistic, pagan movie.

Shakespeare buffs will undoubtedly enjoy this more than the casual moviegoer, because there are inside references to his works and contemporaries. All the acting is fine, especially by Paltrow who plays four characters in one: the Lady Viola in love, the Lady Viola in resistance to Wessex, the Lady Viola in masculine masque as the young actor Kent, and, of course, the Lady Viola in theatrical pose as Romeo. The direction here is swift, and certainly seems designed for a 1990’s pagan audience. The photography seems to increasingly improve as the movie progresses (the images in the beginning almost seem flat and lifeless). Kudos should go to art direction and costumes, which probably will be recognized come Oscar time.