"Evil Shouldn’t Be Fought with Evil" 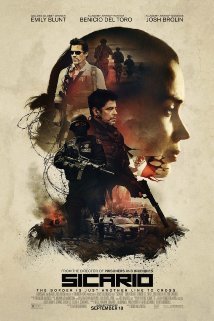 SICARIO is a brutal, violent, thriller about the American governments battle with the drug cartel in crime-ridden Juarez, Mexico. Kate is a tough FBI agent who does everything by the book. When a house raid in a Phoenix suburb turns up over 40 dead, kidnapped bodies, Kate is given the opportunity to catch the cartel leader responsible by working with an elite government task force. However, the task force functions outside the Rule of Law at times, putting Kate on edge with her new team members.

SICARIO is intriguing till the very end and hardly lets up, except for the hilarious antics of Josh Brolin’s character, which provide some perfect levity to the movie. Expertly directed by Denis Villeneuve and lensed by brilliant cinematographer Roger Deakins, SICARIO hearkens back to some of Roger’s previous great work. While the movie ethically chooses to sit in the grey areas, what can’t be denied is that evil must be stopped, but one shouldn’t compromise ethically to stop that evil. SICARIO’s grisly, brutally realistic violence is almost too much to bare, so extreme caution is advised.

(Pa, B, P, AP, Ab, LLL, VVV, S, N, AA, DD, MM) Light mixed pagan worldview with positive moral, American and other role models that fight evil, but who eventually are forced to compromise, evil is shown as evil, but there’s a message saying the American government’s war on drugs is only making violence and crime worse, and man says “time to meet God” right before murdering a family; nearly 40 “f” words, 12 other obscenities and six strong profanities misusing Jesus Christ’s name; extreme violence, includes grisly images of bodies with bags over heads being found inside the walls of a house, man loses his arm in a explosion, man’s throat is slit, explosions, men and women are hung naked and dead from bridges by the cartel, implied torture, man murders a man, his wife and two children, many people are shot with blood splatter; man and woman kiss on couch and it almost leads to sex; woman in bra, dead and completely naked bodies are seen from a distance, both male and female; some drinking and drunkenness; heavy smoking of cigarettes, and the plot revolves around the drug cartel, though no drug use is seen; and, moral relativism, lying to fellow government workers, deceit, and torture.

SICARIO is a brutal, violent, suspenseful, thriller about the American government’s battle with the drug cartel in crime-ridden Juarez, Mexico.

Kate (Emily Blunt) is a tough FBI agent who does everything by the book. A house raid in a Phoenix suburb turns up over 40 dead, kidnapped bodies and triggers an explosion. Kate is then given the opportunity to catch the cartel leader responsible by working with an elite government task force. Leading the task force is Matt (Josh Brolin), a mysteriously likable government official, who sees potential in Kate to help with their mission.

Almost immediately after accepting this assignment, Kate is flown to Texas where she and Matt meet up with Alejandro (Benicio del Toro), a mysterious Columbian who’s consulting on their fight with the cartel. Kate is left in the dark about their mission, but it turns out to be a prisoner exchange between the U.S. and Mexico. Picking up the prisoner, the armed caravan of soldiers smoothly makes it in and out of Juarez, but between the two borders, armed men attempt to stop the Americans unsuccessfully.

Kate, beyond frustrated at being in the dark, eventually gets Matt to reveal some details of their mission. If they create enough noise, hit the cartel’s money and their smuggling tunnels, they can lure the cartel leader out into the open. Kate, completely disgusted with how they break the rules, reluctantly continues the mission, but she learns how far the government is willing to go to win the war on drugs.

SICARIO is intriguing till the very end and hardly lets up, except for the hilarious antics of Josh Brolin’s character, which provides a perfect levity to the movie. The movie is expertly directed by Denis Villeneuve and lensed by his collaborator cinematographer Roger Deakins, SICARIO. Meticulously detailed in framing, Deakins images never bore and never distract from the story at large. Aided by good editing, pace and acting, the movie seems nearly perfect, but Kate’s idealistic character refuses to be likable in any sense. The filmmakers assume that the audience will be as in love with proper governmental procedure as Kate is, but that’s not the case. While the movie takes great strides to show the corruption and moral compromises of the U.S. government and the audience rightly sides with Kate, the journey and the end leave something to be desired.

SICARIO asks some legitimate questions about how far governments are willing to go to achieve their “noble” goal. Some will interpret the movie as an attack on the America’s drug war in the states and in Mexico. Others will argue that the movie shows the destructive, abhorrent, viciousness of the drug cartel so explicitly, that it’s imperative they must be stopped, at almost any cost. While the movie chooses to sit in the grey area rather than take a black and white stance, what can’t be denied is that evil must be stopped, but one shouldn’t have to compromise ethically to stop that evil. If the filmmakers had a Christian worldview, they might have included Romans 12:17, “Repay no one evil for evil, but give thought to do what is honorable in the sight of all.”

SICARIO isn’t a groundbreaking movie in the least, but it’s effective and provocative in a good sense. However, the grisly and brutally realistic violence is almost too much to bare, so extreme caution is advised.