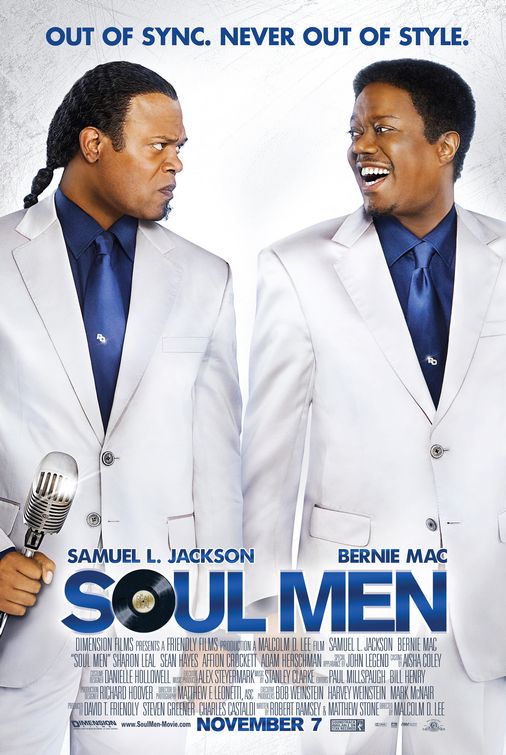 SOUL MEN is the story of two former singing sensations who travel the country together, heading for the memorial concert of their former partners. The two men, who were estranged for 20 years, bicker and quarrel their way across country, encountering mishaps, a long-lost daughter, and a shaky reconciliation. They get into jam after jam, all laced with constant foul language, vulgarity and graphic sex. To get to the memorial concert at the Apollo Theater, one has to break the other out of jail for violating his parole.

SOUL MEN is a spotty comedy adventure movie that strives to be funny but instead repulses with its over the top profanity and lewdness. The musical scenes are well-staged with toe-tapping, smooth performances by the aging leads. The predictable direction and unnecessary and excessive foul language mar what could have been a funny, entertaining comedy. It is a sad swan song for Bernie Mac, who passed away after the completion of the film. SOUL MEN is “sold-out” to the world of sleaze and illicit sexuality. Instead of entertaining and uplifting, its jokes and foul language are crude, abhorrent and shamelessly shameful.

(HH, LLL, VV, SSS, NN, AA, DD, MMM) Strong humanist worldview; excessive foul language includes at least 200 obscenities (including many “f” words) and 10 mostly strong profanities; strong violence includes firing of a gun at a tire and into open space, trashing of a hotel room during a fight between the two main characters, beating up and humiliating the boyfriend of the daughter of one of the main characters, and breaking out of jail while pointing a gun at a policeman; very strong sexual content includes sexual promiscuity encouraged including a lewd scene implying oral sex between a black man and a white woman, a white mother and daughter fornicate with the two main black characters, two black men sleep in the same bed, numerous jokes about Viagra, one of the main characters commits adultery with his best friend’s wife and has a child out of wedlock with her, pornographic magazines in the trunk of a car, and a brief but explicit shot of several semi-naked white women implying a group sexual encounter with one of the black men; images of rear and upper female nudity, plus rear male nudity and female cleavage; beer and hard alcohol drinking, several scenes in bars with active drinking, plus one of the main characters is an alcoholic; drug references includes marijuana use, selling illegal drugs is shown in a negative light; lying to cover one’s reputation, disrespect for police and authorities, jail time both implied and a scene of both main characters incarcerated, bad role models including disrespectful younger musicians making fun of the age of the two main characters, stealing money from a parent’s bank account, and negative parental role model of one of the main characters committing adultery with his best friend’s wife, abandoning her, and never meeting his daughter from the union until late in life.

Although it’s been 20 years since they have spoken, two estranged former soul stars, Louis Hinds and Florence Henderson (Samuel L. Jackson and Bernie Mac) agree to travel across country together to attend their former partners’ memorial concert at the legendary Apollo Theater. As they travel together in a vintage late 70’s green convertible, the two bicker and quibble about their career together, and go from one mishap to another as they struggle to make New York by concert time. The two aging stars reminisce about their heyday and struggle to reconcile their differences as they perform in a number of low class bars and clubs across the country.

After realizing they have been robbed by a blonde mother (Jennifer Coolidge) and daughter team after an illicit night in a sleazy motel, the two make their way to Tulsa to visit the home of Flo’s former wife in hopes of borrowing some money. When they arrive, a young man answers the door and informs them that Flo’s ex-wife is dead. However, an attractive young woman, named Cleo (Sharon Lea) dressed in a waitress uniform then comes to the door to see what’s happening. Flo puts two and two together and assumes she must be his daughter that he never knew about.

She invites them to stay over in her home, while they are trying to get some funds for their trip from their management company. The two realize Cleo can sing. While Flo is trying to devise ways to establish a relationship with his supposed long-lost daughter, the two decide to take her with them to Memphis. After Cleo’s boyfriend physically abuses her, the two soul men beat him up and convince Cleo to come with them.

Meanwhile, a nerdy assistant at their management company (Adam Herschman) withdraws $10,000 from his parent’s bank account and agrees to meet them at the swanky Peabody Hotel in Memphis with the needed funds.

When the two soul men try to check in at the Peabody, they are rebuffed by the hotel staff with records of previous stays when the two trashed the hotel and held wild parties. Their nerdy friend manages to secure three suites under his name and credit card.

After a swinging performance in Memphis, Louis and Flo get in a tangle with Cleo’s former boyfriend, have a run-in with the police and end up in jail. Flo is released, but Louis is kept imprisoned for violating his parole. Flo finds out Louis actually had an affair with his ex-wife, and Cleo is actually Louis’s child. Flo then imagines Louis is dying, and breaks him out of jail and the two continue their wild trip to NYC and the Apollo Theatre.

Once at the Apollo, the two convince their manager that they have to perform one song together before being turned over to the police. They reconcile with Cleo, have a stirring last song and are hauled off to jail. At the end of the movie, it is announced that the two served one year, and then were released to make a comeback.

SOUL MEN is a spotty comedy adventure movie that strives to be funny but instead repulses with its constant over the top profanity and lewdness. The musical scenes are well-staged with toe-tapping, smooth performances by the two aging leads. The predictable direction and unnecessary and excessive foul language mar what could have been a funny and entertaining comedy. It is a sad swan song for Bernie Mac, who passed away after the completion of the film.

SOUL MEN is “sold-out” to the world of sleaze and illicit sexuality. Instead of entertaining and uplifting, its jokes and foul language are crude, abhorrent and shamelessly shameful.