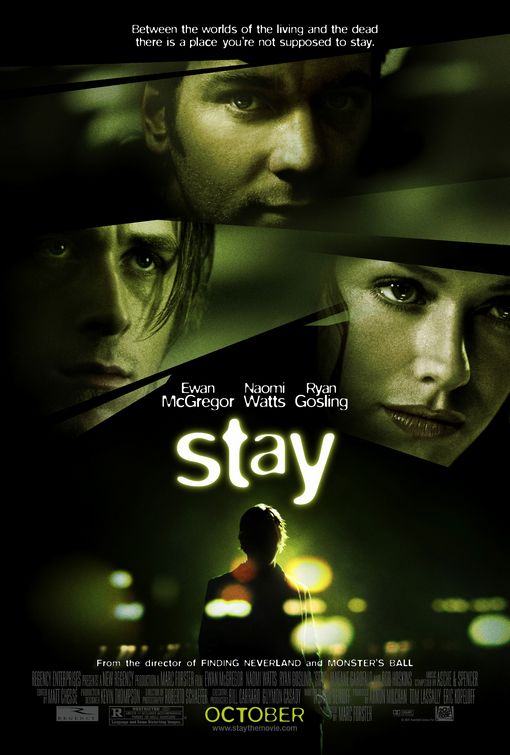 The movie STAY opens with a young man involved in a terrible traffic accident on the Brooklyn Bridge. Cut to another man, psychologist Sam Foster, who sits up in bed and looks down at an engagement ring in his hand. Sam still has doubts about proposing to his live-in girlfriend, Lilah, because Lilah has tried to commit suicide. Sam takes over for a sick colleague. The first patient is a disturbed young artist, Henry Letham, the man from the traffic accident. Henry tells Sam he plans to kill himself in several days. Sam races to prevent Henry from carrying out his plan, but events spin out of control, and viewers begin to wonder what is really happening. Is Sam the one who's really going mad?

STAY suggests that dreams, especially nightmares, occur in a limbo realm between life and death. The movie also asserts that, despite its tragedies, life is worth living because there's so much beauty in it. Many viewers may feel cheated by the movie's mundane ending, but the film may still haunt you after you leave the theater. The movie contains strong foul language, violence and themes of suicide, however.

(B, PaPa, O, LLL, VV, S, N, A, D, M) Slight biblical worldview offering hope of an afterlife at the end and advocating life over suicide, but with some strong pagan content, including unmarried characters live together, and mystery surrounds an occult element where a man appears to be able to predict the future (man also appears to heal a blind man at one point), but something else is really happening; 23 obscenities (including many "f" words), nine strong profanities and four light profanities; strong violence includes major theme of suicide, violent car crash shown at least twice, pools of blood under victims, dog bites man's arm, mental patient violently struggles against doctors and medical personnel, man puts out cigarette on his arm and later we see several such burn marks on that arm, and man puts gun in his mouth but movie cuts away to reveal the situation was not real; no sex scenes but implied fornication and man visits dance/strip bar where female dancers wear skimpy bikinis; upper male nudity and women in skimpy bikinis in dance/strip bar; alcohol use; smoking, man refuses to put out his cigarette on the subway, references to people taking anti-depressant and anti-schizophrenic drugs prescribed by doctors, and doctors inject mental patient to sedate her or calm her down; and, romantic couple keeps secrets from one another, mental patients fight people trying to help them and man appears to heal a blind man but the situation didn't really happen.

STAY is a sensitive psychological mystery about the vagaries of life on earth. It plays like a mysterious dream. Its conclusion may frustrate many viewers, but the journey to that destination has some invigorating moments.

The movie opens with a terrible traffic accident on the Brooklyn Bridge. The driver sits on the street as his car burns. Then, he walks away.

Cut to another man, Sam Foster, who sits up in bed and looks down at an engagement ring in his hand. Sam is a psychotherapist living with a beautiful blonde artist, a painter named Lilah. Sam still has doubts about proposing, however, because Lilah tried to commit suicide some months before.

Sam takes over for his colleague, Beth, who’s out sick. The first patient he sees is a disturbed young artist, Henry Letham, the same man from the traffic accident. Henry somehow can predict the future and tells Sam that he plans to kill himself in several days, at midnight. As Sam races to prevent Henry from carrying out his deadly plan, events spin out of control, and viewers begin to wonder what is true and what is false, and whether Henry isn’t just some kind of dark fantasy doppelganger for Sam, who may be the one who’s really insane.

STAY suggests that dreams, especially nightmares, occur in a limbo realm between life and death. It also suggests that our lives are filled with many different paths which we might take. Love is another important theme in the movie, which shows viewers that love brings both joy and pain. Finally, the movie opines that, despite the tragedies we undergo, life is worth living because there’s so much beauty in it.

Though the movie’s handling of these themes and characters is intriguing, it is too elusive and vague. That is why STAY earns three stars instead of four stars. The movie also contains strong foul language, violence and themes of suicide. Furthermore, although it plays with reality and, hence, would seem to contradict ontological Christian truth, the ending reveals that the focus of the movie is really the psychology of the mind, the psychology of dreams and the experience of dying. Death, of course, is inevitable for all of us, and STAY doesn’t suggest otherwise. It does, however, offer a brief hope of an afterlife, though it doesn’t say anything more about it. Many viewers may feel cheated by the movie’s mundane ending, but your experience of the movie may haunt you after you leave the theater.