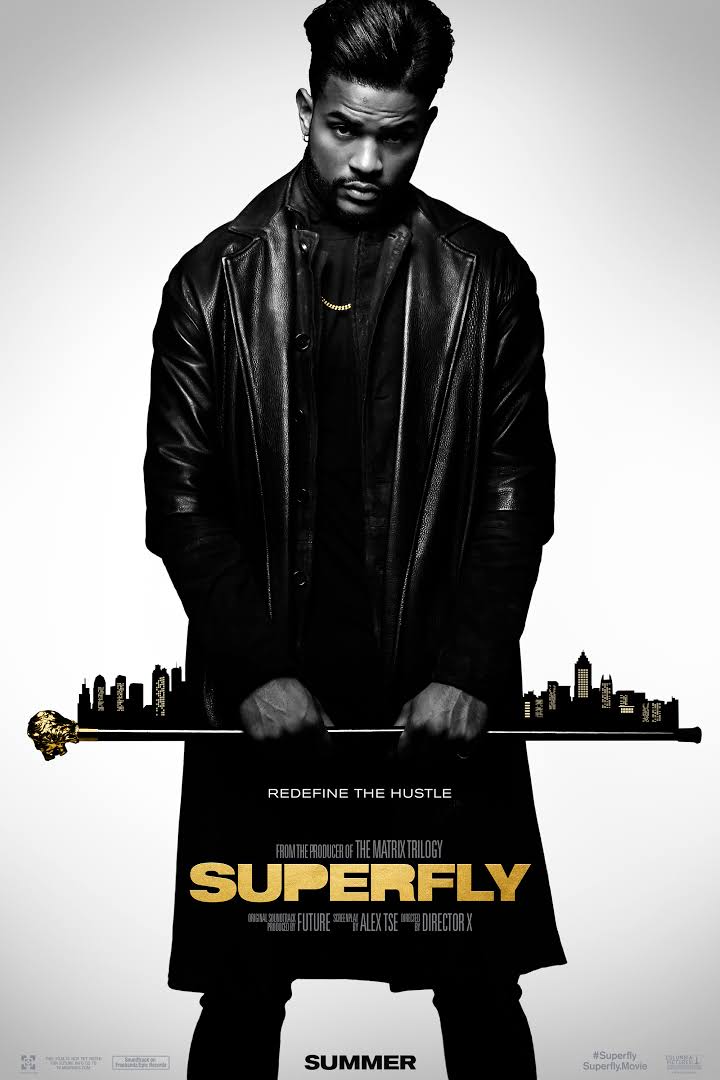 SUPERFLY (2018) is a remake of the 1972 blaxploitation crime drama about a successful, suave drug dealer who wants one final big score before leaving the drug business. Youngblood Priest is smart, rich, and super cool or superfly. When he triples the amount of cocaine he deals in Atlanta, everything seems to go well until two corrupt police officers try to force Priest to work with them. Everything starts to fall apart, and it looks like Priest might not get out scot free.

SUPERFLY is incompetently made, with boring dialogue and messy action. What’s truly terrible is SUPERFLY’s less of a blaxploitation movie, and more of an exploitation movie. The protagonist wants to get out of the drug business, but it’s for selfish reasons. Also, he’s willing to cheat, kill, blackmail, and harm the citizens of Atlanta further to do so. It’s truly amazing how rotten all the characters are in this SUPERFLY remake. The movie never stops to show how empty their immoral lifestyles are. Sadly, of all the speaking roles in SUPERFLY, there are no positive portrayals of decent, law-abiding African-Americans.

(PaPaPa, APAP, P, AbAb, HoHo, C, LLL, VVV, SSS, NNN, AAA, DDD, MMM):
Dominant Worldview and Other Worldview Content/Elements:
Very strong immoral, pagan worldview extols rampant drug use and drug selling, contains immoral/criminal behavior that isn’t punished or has little consequences and has a strong vengeance theme, plus Anti-American elements include the protagonist who wants to achieve the “American Dream” by selling drugs to get rich, and there’s an anti-police message that portrays corrupt law enforcement in stereotypical way but does show at least one of the officers facing justice and being arrested by good officers, some hypocritical anti-biblical statements made by gangsters who talk about “God being great,” “all powerful,” and “forgiving,” while they use these beliefs for their own immoral purposes, a Christian mayor blasphemes God by using his faith for campaign purposes but is corrupt in his heart, some depicted lesbian homosexual kissing in one scene, and light Christian elements at a funeral where a group sings about God;
Foul Language:
More than 235 obscenities (including at least 135 “f” words) and ten profanities;
Violence:
Lots of very strong and strong action violence includes many people are shot, high levels of gore and blood splatter, a couple hand-to-hand combat fight scenes, with punching and kicking and a man’s arm is broken, a car chase ends in a car crashing and exploding, a mother has her adult cartel son killed in a grotesque device that turns his remains into liquid;
Sex:
Very strong sexual content includes an explicit and prolonged threesome sex scene in a shower with nudity and lesbian kissing, and man receives oral sex while driving;
Nudity:
An extended scene in a night club features many strippers and dancers in various stages of undress, and many topless dancers, women wear revealing outfits, and upper male nudity,
Alcohol Use:
Heavy drinking and drunkenness;
Smoking and/or Drug Use and Abuse:
Heavy depicted drug use, with many characters doing cocaine, and the plot is about drug dealing with the protagonist trying to do a bunch of big drug sales to retire on a yacht and live “the American Dream”;
Miscellaneous Immorality:
Very strong miscellaneous immorality including offensive representation of African-Americans as primarily loathsome criminals, blackmail, corruption, greed, gambling, and cowardly men leave a shot woman on the street.

An embittered gangster from another crew called Snow Patrol jumps Priest at a nightclub and tries to shoot him. However, Priest, who’s trained in martial arts, easily fights off the foolish gangster, but a young bystander girl gets shot in the process.

Priest tells Eddie, his buddy and partner in crime, that he wants out of the drug business because he knows it’s going to get him killed sooner or later. Priest asks Scatter, his former mentor and current drug supplier, to give him more drugs to sell so he can make more money. However, Scatter thinks it’s too risky and refuses.

To get a larger quantity of drugs, Priest bypasses Scatter and goes straight to the Mexican cartel making the drugs. He convinces the cartel he’ll be able to make them more money, more quickly, and no one will get caught.

Meanwhile, Eddie orders his guys to attack the crew members that jumped Priest, for retribution. This produces even more bad blood between the competing drug gangs.

From the cartel, Priest receives triple the number of drugs he normally gets, so he’s able to sell much more drugs and make a lot more money. However, things become more precarious between Snow Patrol, Priest’s former mentor Scatter, and the drug cartel. When two corrupt cops find out about Priest, they murder one of his guys and force him to work with them. Will Priest be able to get out of this criminal lifestyle safely, with enough money to achieve his greedy dreams?

SUPERFLY comes from a Canadian filmmaker who goes by the name Director X and is known as a music video director who’s worked with rap artists likes Drake and Kendrick Lamar. It’s hard to tell what’s worse about SUPERFLY, the terrible writing or the production that clearly was too rushed to be developed properly. The action is messy, like that of a student film, and the lighting resembles a daytime soap opera. Maybe this would work on TV, but on the big screen it’s painful. The story also lacks a central villain, and the plot is all over the place.

On top of that, there are absolutely no positive portrayals of important major or minor African-American characters who are law abiding, decent citizens. Why does every single character, whether they be black, white or Hispanic, want to exploit the citizens of Atlanta by getting them hooked on cocaine? Even the city’s black mayor is corrupt and eventually is blackmailed by Priest for his own purposes.

In another disturbing turn of events, the movie introduces two corrupt police officers who get involved in Priest’s drug business. One of the officers shakes down one of Priest’s men, gets the information he needs, and then executes the man and his lady friend, but makes it look like a self-defense police shooting. Later in the movie, Priest gets the chance to enact his lust for revenge when he gets to brutally beat the officer with the officer’s own baton.

By the end of the movie, MOVIEGUIDE® was left dumbfounded by how rotten all the movie’s characters are and how the movie’s glossy style never turns into a self-reflective space showing how empty criminal lifestyles are. Instead, Priest gets out with his loads of cash so he can enjoy life on a yacht in Montenegro, achieving the “American Dream” as he calls it.

One has to wonder why people in Hollywood would want to make this movie, and what good it does for anyone. When it comes down to it, not only black moviegoers but all moviegoers deserve better movies than this SUPERFLY remake.