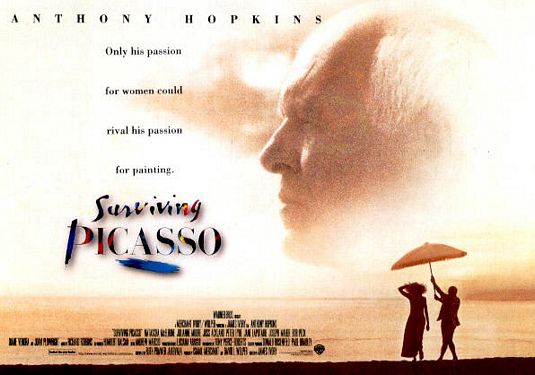 From the creators of ROOM WITH A VIEW comes SURVIVING PICASSO, a biography about legendary artist Pablo Picasso, played by Anthony Hopkins. The movie showcases the tenuous relationship of Picasso with his companion of 10 years, Francoise Gilot. A deeply engrossing, well-crafted movie, it has brief female nudity and an abusive leading man and fails to treat the historical Picasso truthfully.

SURVIVING PICASSO is a biography detailing part of the life of legendary artist Pablo Picasso, played by Anthony Hopkins. The movie showcases the complex personality of the artist and the tenuous relationship with his companion of 10 years, Francoise Gilot . The movie begins in 1943 in Paris. Young Francoise is a beautiful and headstrong art student. One evening, she meets Picasso and is enchanted with him. He invites her to live with him. She accepts and quickly learns her new man is unpredictable, passionate, miserly, and a philanderer. In time, Francoise learns about all the women in his past and present. When Picasso meets, Jacqueline, Francoise realizes she is being replaced and decides with their two children.

The performances by the two leads are both outstanding, as is the direction and the script. A man of eclectic tastes and viewpoints on religion, Picasso championed Communism with its strident atheism and dialectical materialism even though his esthetic sympathies included the trappings of Catholicism and Islam. Primarily, however, Picasso was a passionate philander who according to his own words, “will go out with and even sleep with whomever I want.” A deeply engrossing, well-crafted movie, it has brief female nudity and an abusive leading man and fails to treat the historical Picasso truthfully.