"Adventures in the English Countryside" 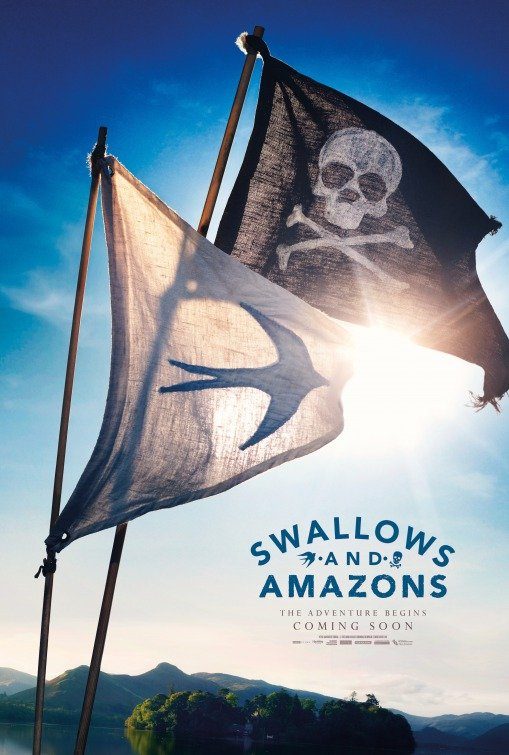 SWALLOWS AND AMAZONS is a charming children’s movie about 1929 England. It’s the latest in a string of adaptations taken from Arthur Ransome’s original book series, which began in 1930. The Walker children and their mother travel a few hours away by train to a lakeside resort where they will spend the summer. The children’s adventures upon a nearby island lead them to battle both real and imaginary bandits throughout the story.

In true, childlike fashion, the actual and surreal overlap, so that dangers in play and in reality are placed on equal footing. However, two scenes depict extreme peril and will be understood as anything but make-believe, so caution is warranted. Spiritually, it is disconcerting that no one calls upon God when a child’s life is in danger, or references God when the ordeal is over. So, while Christian values, such as love between family members, honesty, bravery, and trust are presented, an admission or depiction of Christianity is not. Also, a few mentions of “Destiny” are declared, requiring discussion with parents. MOVIEGUIDE® advises caution for children for SWALLOWS AND AMAZONS.

(BB, Pa, Ho, O, VV, D, MM) A strong moral worldview, with a few references to “Destiny,” plus a superstitious action leads to a desired effect and very brief, a fortune teller poster hangs in the background of one scene, implied question of male homosexuality and a trick is played against sexual stereotypes; one profane euphemism, a threatening sign declares danger of death, a few statements by imaginative children imply death; mostly light and brief strong violence includes children and teenagers involved in physical danger (intense in one scene), man jumps from a moving train, a pocketknife opened/wielded a few times in defense or as a threat, a gun pointed toward others, gun held threateningly before a teenager, a flare gun used like a weapon by teenagers toward children, bow and arrow used by and against children, a man struck unconscious after being held at gunpoint, and child nearly drowns; no sex; no nudity; smoking one cigarette and an older Englishman smokes a tobacco pipe; and, a mysterious and slightly cruel man has intentions that are difficult to place through much of the movie, small implications promoting vegetarianism, moral relativism when children disobey elders and steal property (with “good intentions”), brief image of animal skulls hang near scary sign, a dimly-lit body bag shown with reference to killing, gross and dead small animals depicted, a live snake hisses near a person, and secrets kept from authority figures.

SWALLOWS AND AMAZONS is a charming children’s movie that takes place in 1929 England. It’s the latest in a string of adaptations taken from Arthur Ransome’s original 1930 novel of the same title, the first in a series of books.

The Walker children and their mother travel a few hours away by train to a lakeside resort where they will spend the summer. Each one yearning to grow, they ask their mother (and their military father, via telegram) if they can go by themselves to a nearby island. Their ensuing adventures lead them to battle both real and imaginary bandits throughout the story.

With a slight obsession with all things involving pirates, the Walker children end up encountering playful and dangerous characters that are a match for their creative minds and strong wills.

While they’re still on the train, the children meet three strange men, one of whom threatens them before putting himself in physical danger in front of the kids. Later, the Walkers see these same men in the lakeside village near their vacation spot.

At one point, the Walkers accidently damage one of the men’s property, thinking it abandoned. When confronted, the children take the high road and confess before they’re given stern admonitions by both the property owner and their mother.

After hearing back from their father, their mother and the cottage owners allow the children to use a small boat to spend several days and nights at the island by themselves. The children are led by the eldest brother, John (who appears to be about 13 or 14), followed by sister, Susan; sister, Tatty; and youngest brother, Roger (about 6). By today’s standards, it seems unrealistic for children to sail to an island without adults, but the story works, remaining intriguing and entertaining.

On the way to the island, they lose some of their supplies, and nearly one of their young crew. Sadly, no one prayed to God when a child went overboard, during or after the ordeal. However, the children appear to cherish their sibling, and all of them grow through the process.

Once they reach the island, the Walkers practice their survival skills, as they had learned from the adults before they left. They set up camp, attempt to fish and cook, and eat their provisions without too much complaining. Perhaps influenced by the fact that they have a father in the Royal Navy, the Walkers often act respectfully toward each others’ roles and leadership, which is refreshing to see among child characters. However, they sometimes bicker, which keeps them relatable and realistic.

The children, who name themselves after their bird-themed boat, Swallow, are not alone in their adventure. They soon meet other young mariners, the Amazons, who become playful “enemies” from the first encounter. Later, however, the Swallows and Amazons will join forces.

With their childlike play behind them, the two groups engage in real espionage in order to save an important man. This provides the Walkers their own military-like victory, but more importantly, it brings a troubled family closer together. Besides the Amazons, the Walkers also meet surprisingly kind adults who help them survive in the wild.

SWALLOWS AND AMAZONS is a charming, fun adventure. The espionage story in the movie does not occur in the original book.

Many second chances are presented in the story, from a mother to a child, from one sibling to another, and between would-be enemies. Charity is sometimes generously shown not long after an offense; at other times, though, hardened characters take time to change their ways. Nonetheless, many positive changes happen and shine through by the movie’s end.

The real and the surreal overlaps in SWALOWS AND AMAZONS. Consequently, the dangers in play and in reality are placed on equal footing. To children, this is probably more enjoyable than it is to many adults. Nonetheless, two scenes that depict extreme peril will be understood as anything but make-believe, so caution is warranted.

Christian values, such as love between family members, honesty, bravery, and trust are presented, but an admission or explicit depiction of Christianity is not. Also, a few mentions of “Destiny” are declared, requiring discussion with parents. MOVIEGUIDE® advises caution for children, especially for a death-defying scene toward the finale.