"A Difficult Road to Redemption" 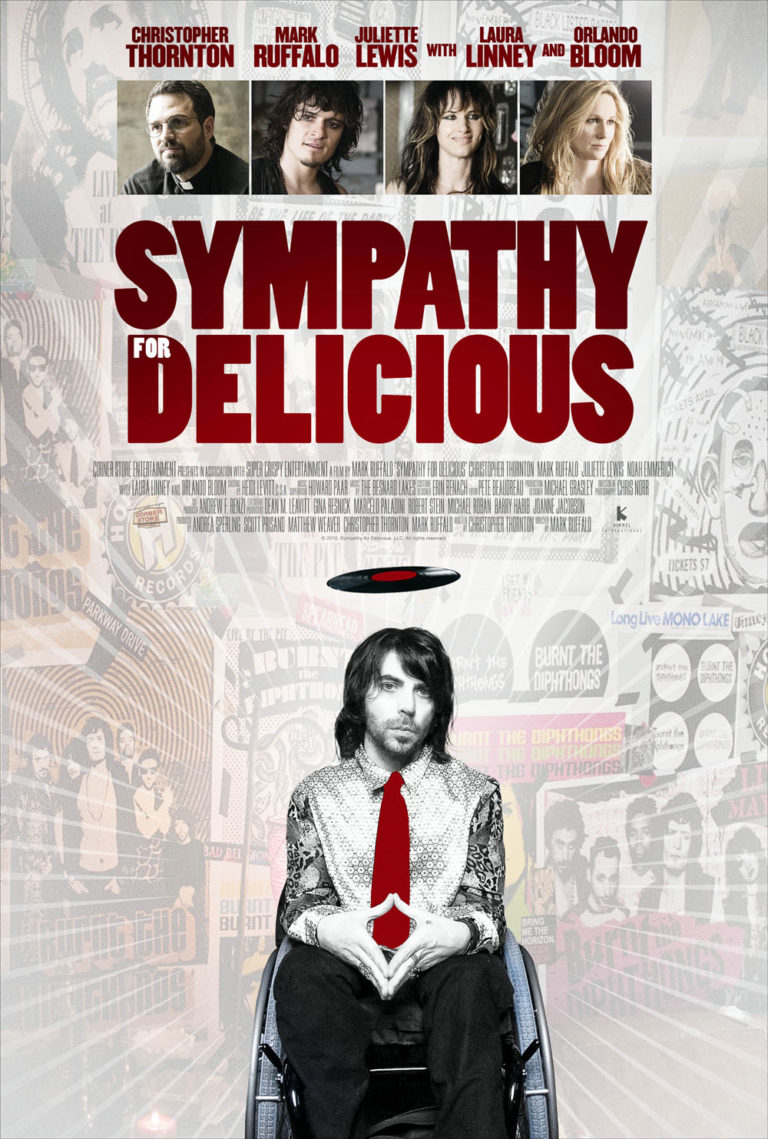 SYMPATHY FOR DELICIOUS is a unique drama about a DJ who becomes homeless on skid row, when an accident leaves him paralyzed. Watching over Dean, whose nickname is Delicious D, is Father Joe, a Catholic priest who’s tirelessly devoted to feeding and meeting the basic needs of the homeless in Los Angeles. Dean attends a faith-healing service. He becomes disappointed when he isn’t healed but surprised to find that he now can heal others. Father Joe convinces him to help as many of the homeless as possible, but, as donations increase, Father Joe isn’t honest with Dean about how much. Angry at being deceived, Dean enters a dangerous relationship with a vile heavy-metal band. Can he find true redemption when another tragedy strikes?

SYMPATHY FOR DELICIOUS is a remarkable drama that explores issues of faith and miracles and God’s purpose for our lives in a mature and complex fashion. Ultimately, forgiveness and some Christian redemption and healing are found, but not before a journey to the dark side. SYMPATHY FOR DELICIOUS also has plenty of foul language and substance abuse associated with the rock band, so extreme caution is advised.

(CC, B, Ab, LLL, VV, S, N, AAA, DDD, M) Strong Christian, moral worldview with a positive ending set in a dark world and mixed with some anti-religious material before one gets to the positive ending, including disabled homeless man (on the way to accepting his gift and God’s grace properly), expresses anger towards God and Jesus several times, a Catholic priest starts out with noble intentions and winds up losing his sense of purpose as money starts pouring into his ministry for helping people get healed, and priest misleads the disabled healer about his ability to pay him, plus a very extreme amount of foul language, due mostly to the world of heavy metal music and Los Angeles Skid Row in which movie’s set; 200 or more obscenities (including many variations of the “f” word) and many uses of God’s name used disrespectfully including “GD” and outright mockery of God and miracles by the villains of the movie, offset, however, by storyline of a faithless and despondent disabled man learning to use his ability to heal people miraculously for Godly purposes; brief disturbing violence and some light violence such as a group of men break into disabled homeless man’s car and steal his belongings before running away from him, a man breaks disabled man’s car window and violently pulls him out of the car to threaten him, and rock singer purposely uses a butane lighter to burn a bandmate’s arm three times and then demand that a homeless paralyzed faith healer heal him; two shots of rock band groupies writhing around band members and disabled protagonist; brief upper female nudity but not in a sexual situation; rock band drinks constantly and is frequently drunk; rock band repeatedly uses drugs to excess repeatedly, with one band member dying from an overdose; and, rock band and their manager delight in misleading concertgoers about the disabled man’s ability to heal and hire actors to pretend to be sick and then healed.

SYMPATHY FOR DELICIOUS is a remarkable, unique drama that explores issues of faith and miracles and God’s purpose for our lives in a mature and complex fashion, with positive portrayals of a Catholic priest that are, however, offset by his eventual loss of purpose. Yet, the movie is undeniably pro-God, Jesus and basic faith, showing that the main character finds true purpose and happiness when he attains a truly personal relationship and purpose with Christ ahead of churches and other outside influences.

However, due to the fact it’s set against the seamy world of heavy metal music and the Los Angeles Skid Row, there’s more profanity and obscenity in this movie than almost any other recent movie in memory, so an extreme caution is offered on that aspect. And, the movie’s positive Christian worldview doesn’t come into full clarity until the end.

SYMPATHY FOR DELICIOUS follows the story of a homeless, disabled man named Dean (Christopher Thornton, who also wrote the script), whose nickname is “Delicious D.” He was a DJ in music clubs before the unspecified accident that paralyzed him, and he now lives in his car on Skid Row. He is watched over by a priest named Father Joe (Mark Ruffalo, who also directs), who’s tirelessly devoted to feeding and meeting the basic needs of the homeless on Skid Row.

When Delicious attends a faith-healing service, he is heartbroken to find he’s not healed, but is astonished to find that he now has the ability to heal others. Father Joe convinces him to help as many of the homeless as possible, but, as donations pour in and even rich people come to seek healing, the drive for money – which the priest is using to build a huge homeless shelter – overcomes the priest’s sense of fairness in offering money to Delicious for his basic living needs. Even if he’s using the money for a noble purpose, greed has corrupted his work.

Delicious is angry at being deceived and enters a dangerous relationship with a vile heavy-metal band, whose lead singer (Orlando Bloom) and manager (Laura Linney) want to exploit Delicious’ healing powers by taking him on a tour and having him heal people onstage while they play, akin to being a sideshow freak. Delicious is torn about this, but, as the money piles up, and he gets attention from groupie women, he dives into this corruption anyway. [SPOILERS follow] However, it comes to a tragic end when Ariel (Juliette Lewis), his one true friend in the band, overdoses on painkillers during a show and dies onstage when he insists on healing her and prevents paramedics from helping her in time.

Delicious is charged with manslaughter for his interference in her care, and the band and manager all turn on him and leave him to get thrown in jail. The priest testifies on his behalf, but in civilian clothes that diminish his impact on the witness stand. Delicious gets thrown in prison and is forced to consider his life directly, a process that is conveyed through showing him contemplate rather than through heavy-handed dialogue. During this portion of the movie, the priest visits him and apologizes for letting him down, and explains that he has left the priesthood and feels adrift now.

Ultimately, Delicious is sent to work on a prison road-cleaning crew of disabled prisoners. One day, on a break, he sees the wheelchair-bound acquaintance who asked him to attend the initial faith-healing service. Delicious had harbored anger towards this man due to the fact he couldn’t personally be healed and later refused to help heal that man, but now he sees the other man happy and shopping with a girlfriend. Delicious discreetly decides to heal the man by touching a shirt the man’s about to wear. The man is healed and leaps out of his wheelchair giving joyful praise to Jesus as Delicious discreetly rolls away without taking credit.

Once outside, his prison-guard supervisor suddenly tells him, “You’re free now,” and allows him to abandon the rest of his prison sentence. Delicious rolls away happy, with the implication that he is a changed man who will use his gift to help others without pursuing money for either the church or corrupt groups, just to survive and help others selflessly.

SYMPATHY FOR DELICIOUS comes as a surprise, since its star and director Mark Ruffalo frequently acts in highly liberal movies with non-Christian values. While the excess of foul language and references to substance abuse are regrettable here and will prevent the movie from reaching as wide an audience as it deserves, it’s an undeniably sincere and powerful exploration of suffering, faith and miracles as well as the temptations that even Godly men like the priest character have to face.

SYMPATHY features outstanding performances, a gritty sense of place, and powerful scenes of healing and its impact on downtrodden lives. It was written by Christopher Thornton as a means of healing amid his own crisis of faith after a paralyzing accident years ago, and his longtime friend Ruffalo kept his vow to make the movie when he could afford to do so. SYMPATHY FOR DELICIOUS offers a bold exploration of faith and individual relationships with Christ that is rare in an independent movie featuring acclaimed actors. As noted above, extreme caution is advised, so please check out our CONTENT section before you go.