"No Honor Among Thieves, But Friendships Can Survive" 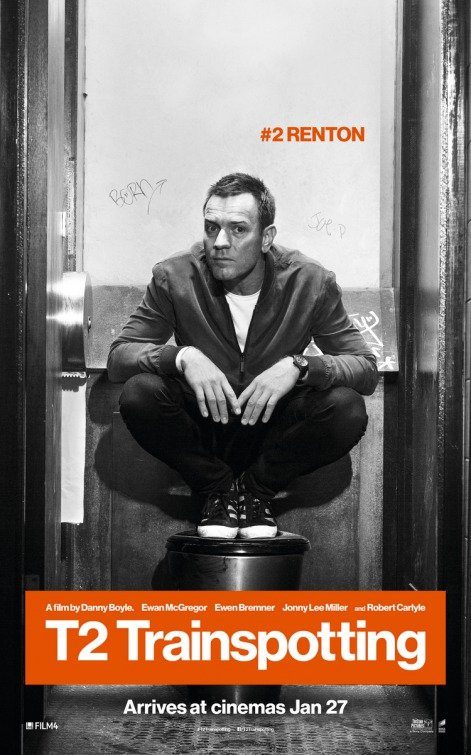 T2 TRAINSPOTTING is a comic sequel to the acclaimed 1996 British movie about three heroin addicts in Scotland. The men got involved in a 16,000-pound drug deal with a psychopathic criminal after a fourth friend died of AIDS. The sequel takes place 20 years later when one of the friends, now sober, returns from America after stealing two of the four shares of the drug deal profits. Mark, the returnee, and Spud, who’s still addicted to heroin, decide to join Simon in building a house of prostitution disguised as a bed and breakfast. However, the criminal psychopath has escaped prison and seeks deadly revenge against Mark.

Heroin addiction doesn’t play such a big role in T2 TRAINSPOTTING. The movie also has some funny and even heartwarming twists and turns, combined with its new pulsing soundtrack. However, it has a nearly constant barrage of foul language, plus some sexual references and strong violence. Also, drug abuse is not entirely rebuked, and the movie ends with another betrayal and theft. Ultimately, T2 TRAINSPOTTING still manages to glorify some poor and immoral lifestyle choices.

(RoRo, B, C, Ab, LLL, VV, SS, NN, AA, DD, MMM) Strong Romantic worldview about following your dreams in a broken world promotes emotional decision-making, including stealing and deceit to get ahead, mitigated by some light moral, Christian, redemptive allusions and content, plus in one scene two thieves go to a Protestant club where the members regularly gather to celebrate a 1690 victory in Britain over Catholics and the thieves have to sing a song on the spot, so they invent a Protestant song about the battle with a repeated refrain saying, “And there were no more Catholics left!,” a joke which rouses the Protestants to thunderous cheers; at least 136 obscenities (mostly “f” words) and one strong profanity, plus man committing suicide with a plastic bag vomits into the bag when his friend stops him (vomit incident is played for laughs); strong violence includes man has himself stabbed so he can go to hospital and escape prison, man tries to choke another man to death after man falls onto some hanging wires and gets trapped, man knocks would-be murderer out by banging toilet bowl against man’s head, man hits man, some fighting, man chases another man twice in hopes of beating him up or killing him, man tries to commit suicide by placing plastic bag over his head, but his friend stops him; briefly depicted lesbian scene, implied fornication scenes, videos of two men visiting prostitute to be blackmailed, implied sodomy; upper female nudity in one scene, and some shots of upper male nudity; alcohol use and drunkenness; smoking, man snorts cocaine several times, another man snorts cocaine, depicted heroin use, and talk about heroin use (including past use), but two men don’t want to be addicted and eventually seem to succeed; and, lying, deceit, stealing, prison escape, blackmail, and some hopeless despair.

T2 TRAINSPOTTING is a comic sequel to the acclaimed 1996 British movie about three heroin addicts in Scotland who get involved in a drug deal with a psychopathic criminal after a fourth friend dies of AIDS caused by injecting heroin. The sequel takes place 20 years later when one of the friends, now sober, returns to Scotland after taking three of the four shares of the drug deal profits. Like the first movie, T2 contains almost constant foul language and glorifies a depraved lifestyle, including stealing money to get ahead, although it makes some positive points about friendship and other issues.

The movie stars Ewan McGregor as Mark, who returns to Edinburgh, Scotland 20 years after he stole 8,000 out of 16,000 pounds from his friend, Simon, and the psychopathic criminal, Begbie, with whom he teamed up to sell some heroin in London. Mark left 4,000 of the 16,000 with their compatriot, Spud, who naturally wasted all of his money on more heroin. Of course, the remaining 4,000 pounds was Mark’s share of the loot, so he came away with 12,000 of the 16,000 pounds.

At first, Mark pretends he’s totally straightened his life around in America, including being married and having two children. Though Mark’s returned to Scotland bearing Simon’s 4,000 pounds, Simon is still upset. “Where’s the interest on my money?” he yells at Mark after starting a fight at the failing pub Simon inherited from his aunt. After the fight, Mark admits that none of his business ventures have really panned out, that his wife has fled divorce papers, and that they really don’t have any children. To top it off, Mark has a heart condition.

Because the pub is no longer the hotspot it used to be, Simon runs a blackmail business and grows marijuana for sale on the side. He’s also developed a cocaine habit to replace his heroin addiction. However, he and his much younger Slovakian girlfriend, Viktoria, want to take Simon’s pub on the waterfront and build a fancy house of prostitution with a nightclub. With Mark’s help, they decide to lie to the government and apply for a business loan to build a bed and breakfast. They successfully government officials that the bed and breakfast could be the start of a new re-development for the waterfront district.

Surprisingly, the government gives them 100,000 pounds, so they hire Spud to help them renovate the large building where the pub’s located. Meanwhile, Viktoria encourages Spud to start writing down all the stories from the old days, which Spud has a talent for describing colorfully, despite his thick Scottish accent.

Things are finally looking up for Mark, Simon and Spud. However, Begbie, the psychopathic criminal with whom they grew up, has escaped from prison, and he wants the money Mark stole from him, or else. Simon holds off Begbie by promising to deliver Mark on a silver platter. Eventually, however, Begbie gets tired of waiting. So, the question becomes, how long can Mark safely avoid the rampaging criminal?

Heroin addiction doesn’t play such a big role in this sequel to TRAINSPOTTING, although Spud’s still caught in its throes until Mark and Viktoria’s encouragement helps him out of it. Spud’s positive transformation adds some heartwarming moments to T2, which also has some funny twists and turns, combined with its new pulsing soundtrack. Ewan McGregor as Mark delivers a heartfelt monologue about the difficulties and continuing disappointments of a struggling modern life in one scene that’s rather thought-provoking.

That said, the movie has a nearly constant barrage of foul language, plus some sexual references and strong violence. Also, drug abuse is not entirely rebuked. In addition, the new business venture of the movie’s protagonists, including Veronika, involves deceit and creating a new prostitution business. Furthermore, in one scene, Mark and Simon exploit a Protestant club’s Anti-Catholic prejudices to steal their personal credit cards. Finally, although Begbie eventually gets his comeuppance, Mark renews his friendships, and it looks like Spud’s new writing career might blossom, the movie ends with a new betrayal and theft, this time involving Viktoria.