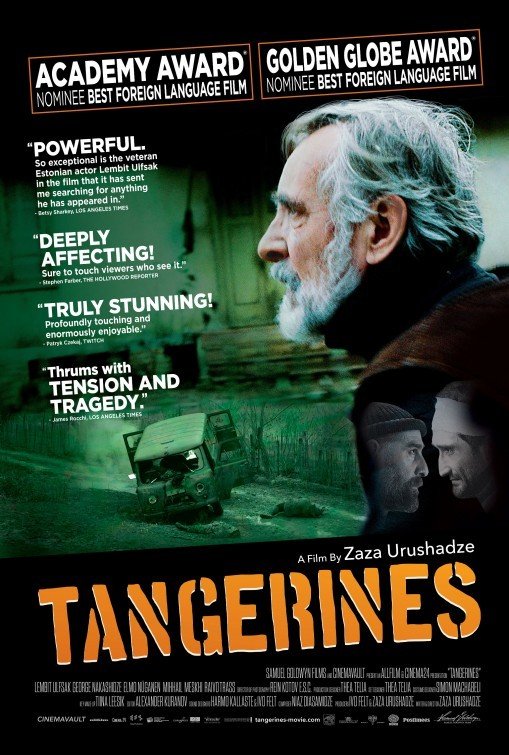 In TANGERINES, two Estonian friends and neighbors, Ivo and Margus, have stayed be-hind in war-torn Abkhazia to harvest Margus' crop of tangerines. There are rumors that the war is close to reaching their farmland, and Margus is in a hurry to salvage his crop before the soldiers get there. A bloody battle breaks out on Ivo's doorstep, and they take in two wounded soldiers who are sworn enemies of each other. One constantly threatens to kill the other, but Ivo makes them promise to keep the peace while they recover. Al-though Ivo's watchful eye is a catalyst to their civil behavior, an unexpected threat forces them to band together.

The plot is a little formulaic, but even so, the backdrop of the Georgian war is what brings some originality to it. The central message mirrors biblical lessons of loving your neighbor and your enemies. Violence is the main concern since this is a war movie. There are several scenes involving gun battles, wounded soldiers, and killings. There is some language. This movie is not recommended for children, and caution is advised for adults.

(B, CC, Pa, FR, Cap, L, VVV, D, M) Light moral worldview with farmer saving two enemy soldiers, instructing them to keep the peace and learn how to get along; one soldier is a Christian and wears a cross around his neck; one soldier hates people of a particular ethnic background and wants to kill them; a soldier practices Muslum prayers in the morning, soldier says "thanks to Allah"; two men own businesses and work in partnership with each other; total of 9 obscenities, one brief depiction from the back of a man peeing, slang word used for peeing; several scenes show dead soldiers' bodies with some graphic wounds and blood, a house is bombed and burns, soldier shoots another at close range and kills him, a recovering soldier tries to sneak into the room of a wounded soldier and kill him with a knife, dead soldiers shown lying in a grave, there is a gun bat-tle where several men are killed, an empty army truck is pushed over a cliff, a hot drink is thrown in a man's face; men lie to soldiers about who they are in order to save their lives, two soldiers hate each other and one constantly threatens to kill the other.

In TANGERINES, two Estonian friends and neighbors, Ivo and Margus, have stayed behind in war-torn Abkhazia to harvest Margus’ crop of tangerines. Their families have fled back to their homeland to escape the conflict. There are rumors that the war is close to reaching their farmland, and Margus is in a hurry to salvage his crop before the soldiers get there. Ivo owns a woodshop and is building the crates for Margus to transport the fruit. They estimate that they have two weeks to get the job done and have been promised that more help is on the way from the Georgian army.

One day, as Ivo works in his shop, Chechen soldiers approach him and demand that he provide food and water. The leader identifies himself as Ahmed and promises Ivo that if he cooperates he has nothing to fear. Ahmed delivers information that the edge of the war is closer than they think and then leaves Ivo and Margus in a furious race against the clock. Little do any of them know that in a couple days time, a bloody battle would take place just outside of Ivo’s doorstep, and Ahmed would be found with a serious head wound. Ivo and Margus determine that all of the other soldiers are dead and take them out into the woods to be buried. In the process, they discover that one of the soldiers is still alive and identify him as a friendly Georgian. Intent on doing the right thing, Ivo de-cides to nurse both men back to health even though they are sworn enemies of each other. Margus can hardly believe the risk Ivo is taking by keeping both in the same house.

Nika, the Georgian, is in critical condition, and it is unknown if he will survive. As Ah-med regains his strength, he continuously threatens to kill Nika. Ivo makes him promise that while they are in his house, they will not lay hands on each other. The two men who had been shooting at each other just days before must now learn to tolerate their differ-ences and put the war aside as they recover.

Although Ivo’s watchful eye is a catalyst to their civil behavior, an unexpected threat forces them to band together in order to protect their lives and Ivo’s home.

The plot in TANGERINES is a little formulaic. Force two people who hate each other to be confined to a small space, and so a story that has been told a thousand times. However, the backdrop of the Georgian war is what brings some originality to it. Through dialogue and the actions of Ivo, it is clear that the central message of this movie is anti-war and pro-peace. Ivo arbitrates the biblical idea of loving your neighbor and your enemies, though he never references the Bible. Nika accidentally exposes that he’s a Christian when his cross necklace comes loose from behind his shirt. Many times (not all), he turns the other cheek and exemplifies Christ-like behavior in the presence of Ahmed’s threats and jeers.

Violence is the main concern, since this is a war movie. A battle is heard from inside a house with bombs and guns being shot. The after affects are shown with several dead soldiers, some with graphic and bloody wounds. A deep grave is dug where the bodies are laid and this could be disturbing for some viewers. The most graphic scene takes place towards the end when Chechen soldiers get into a gun battle with the main charac-ters of the story. Several deaths are shown as a result of weapon’s fire. There is some lan-guage, and the primary goal of Ahmed for most of the movie is to kill Nika because of his hatred for Georgians, not just for self-defense purposes. This movie is not recom-mended for children, and caution is advised for adults.