THE ART OF THE STEAL

"A Clash of Leftist Egos" 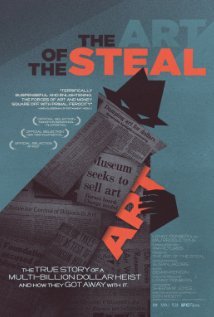 THE ART OF THE STEAL is an interesting documentary about a clash of liberal egos in Philadelphia and Pennsylvania over a famous art school and museum, which owns about $25 billion in Impressionist, Post-Impressionist and Modern art. The movie focuses on the Barnes Foundation, which was begun by pharmaceutical inventor Albert C. Barnes, a socialist who became enamored with modern trends in art during the early 1900s. Barnes, who personally knew such artists as Picasso and Matisse, became upset when the Philadelphia establishment, including the Museum of Art, treated a showing of his collection harshly. Out of spite, he gave his collection, including the art school, to a small local black college when he died. The movie details how the liberal establishment spent decades trying to destroy his will and take over the collection and school from the college. They succeeded.

This movie tries to blame the rich Republican, Jewish philanthropist Walter Annenberg for some of this theft, but it becomes clear that the hypocritical liberal establishment, including Democrat Gov. Ed Rendell, is most guilty. The movie’s one-sided presentation also contains some strong, but brief foul language, so extreme caution is advised.

(RoRoRo, SoSo, AcapAcap, PCPC, L, NN, MM) Very strong Romantic worldview with some overt pro-socialist, anti-capitalist sentiments expressed as radical cultural leaders attack the political and cultural “establishment” in Pennsylvania and Philadelphia, including liberal leaders who apparently aren’t radical enough for them, plus some politically correct slander hurled at a rich Republican, Jewish philanthropist who apparently disliked the movie’s dead hero; eight obscenities (including two “f” words and several “s” words) and one GD; no violence; no sex; old nude paintings showing the female form; no alcohol; no smoking or drugs; and, double-dealing condemned but not the movie’s own hypocrisy and one-sided presentation, which briefly lauds a couple dead socialists, including progressive, “pragmatic” philosopher John Dewey.

THE ART OF THE STEAL is an interesting documentary about how the liberal establishment in Pennsylvania used its power to take over a liberal art school founded by a more liberal guy, who amassed $25 billion in Impressionist, Post-Impressionist and Modern art.

The movie focuses on the Barnes Foundation, an art school created by an art enthusiast named Albert C. Barnes, who personally knew Picasso and Matisse. After making a fortune in pharmaceutical drugs in the early 1900s, Barnes began traveling to Europe, immersing himself in modern art movements. Barnes began collecting and promoting works by Van Gogh, Renoir, Picasso, Matisse, Monet, and other artists. He formed an art school centered on his collection.

A radical supporter of Franklin Delano Roosevelt, Barnes refused to lend out his collection, even to Philadelphia’s Museum of Art, and willed his collection and his school to a small black college. A lifelong political opponent to Walter Annenberg, the Republican, Jewish philanthropist who inherited The Philadelphia Inquirer and started TV Guide, Barnes apparently was personally offended by the cold reception in the 1930s that Walter’s father and the MOA gave to his precious collection, which was quite avant-garde at the time. Barnes eventually died in 1951, leaving behind a will that gave the art collection and school to a small black college and that tried to keep his art collection in the suburb where his foundation was headquartered.

The movie details how the liberal political and cultural “establishment” in Pennsylvania and Philadelphia, including Democratic Gov. Ed Rendell, slowly took over the art school and its founder’s foundation after he died. The art collection is scheduled to be housed in a new facility in the heart of Philadelphia beginning in 2012, against Barnes’ alleged wishes.

Though Annenberg apparently opposed Barnes’ intention to keep his collection away from museums, including the MOA, the movie clearly shows that it was liberal mayors and leaders in Philadelphia, Democrat Gov. Ed Rendell of Pennsylvania, and liberal foundations like the Pew Foundation that undermined the legal codicils in Barnes’ will and that eventually took possession of the $25 billion collection away from the black liberal college, for a penny-ante sum of $40 million no less! It was also they, not Annenberg and his people, who allowed the MOA to take control of the collection, so that Philadelphia eventually could use it as a major tourist attraction. The whole controversy becomes particularly ironic when the suburban neighbors trying to keep the Barnes collection small and local are hit with a civil rights suit. It becomes even more ironic when the powers that be freeze out the little black college by increasing the number of Barnes Foundation trustees from five to 15, like President Roosevelt trying to pack the U.S. Supreme Court in 1938.

The filmmakers behind THE ART OF THE STEAL, and the art establishment types they interview (including the snooty leftist art critic of the Los Angeles Times, Christopher Knight), fail to connect the dots of their own movie. Thus, they fail to note that it was actually liberal leaders in Philadelphia and Pennsylvania that stole the Barnes collection from the Barnes Foundation. They also fail to bleep some “f” and “s” words that their interview subjects sometimes say. The filmmakers also laud the education theories of John Dewey, a socialist, humanist supporter of Mr. Barnes whose child-centered “progressive education,” whole language theories of “Learn by doing” largely have been discredited scientifically. Moreover, it is disappointing that some of today’s remaining leftist film critics have bought into some of the overtly biased leftist messages of this movie, including its slanderous attack on Walter Annenberg, a dead man who can’t defend himself, with little or no critical thought or research.

All that said, THE ART OF THE STEAL provides an interesting insight into how outside forces with a wicked political agenda can destroy the life’s work of one man. In fact, Neo-Marxist, Anti-Christian liberals and socialists like Gov. Rendell, as well as more radical “progressives,” New Age loons and other heretics, have often used stealthy means to infiltrate Christian churches, denominations, colleges, groups, and foundations and pervert their original evangelistic mission. This happened to Harvard University in the 1800s, the National Council of Churches and the Episcopal Church in the 1950s and 1960s, and it is happening still today throughout the United States.

Knowing this history, it is hard for MOVIEGUIDE® to generate much sympathy for Mr. Barnes, his legacy and his ardent supporters. Finally, while MOVIEGUIDE® admires greatly many of the works of the artists Barnes championed, a few of us also must say that a lot of it is just ugly, overpriced junk.