THE ART OF WAR

"Fighting for the New World Order" 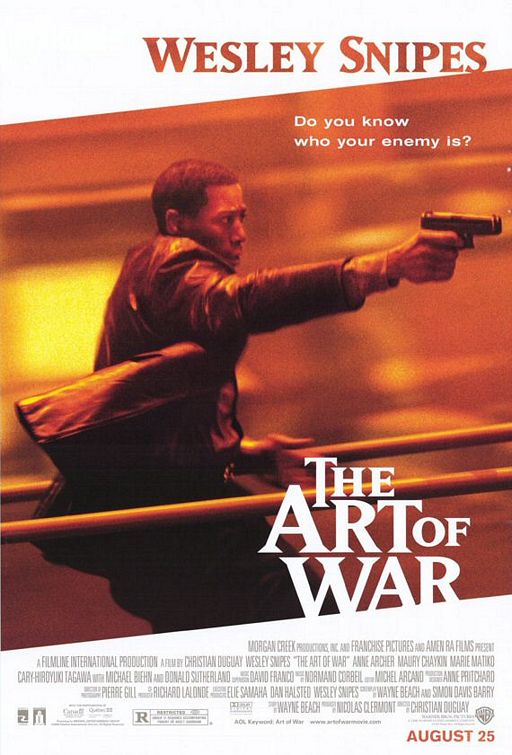 In THE ART OF WAR, Wesley Snipes plays a spy working secretly for the Secretary General of the United Nations, played by Donald Sutherland. While conducting electronic surveillance on the final negotiations for an international trade agreement with Communist China, he sees an assassin murder the Chinese ambassador. Soon, he is on the run from dark, sinister forces with a secret agenda concerning the trade negotiations.

Snipes makes a fine spy hero, but his character lacks moral depth because the movie gives him primarily political motives. Thus, Snipes is out to save the United Nations from destruction so that it can engage in “aggressive peacekeeping” around the world. This globalist agenda supporting godless world government is matched by an attack on the “right-wing” ideologues in the movie who conspire with a corrupt international businessman from Hong Kong in league with murderous, international Chinese gangsters. THE ART OF WAR also includes gratuitous sex, nudity, foul language, brutality, and gore. Those things in themselves might qualify this sometimes predictable and overlong movie for a strongly negative rating, but the movie’s false worldview and inaccurate, bigoted portrayal of what it calls “right wing ideology” are what makes it truly abhorrent

The best action movies and thrillers feature heroes who take personal moral stands and try to limit the brutality of the world surrounding them. For example, in SAHARA and TO HAVE AND HAVE NOT, two of Humphrey Bogart’s best action thrillers, Bogie plays a couple of heroes who get upset when standards of common decency are violated. In the first movie, he shows compassion toward a captured enemy soldier, an Italian, even though some of the British soldiers around him complain vociferously. In the second movie, he gets the most angry when a French officer serving the German National Socialists in the Caribbean threatens a young woman (Lauren Bacall) and threatens Bogie’s fishing buddy (Walter Brennan), a weak but lovable man who has a drinking problem. Such scenes can lift an action movie or thriller above the violence inherent in the genre.

Viewers will find little such ennobling character in the violent spy thriller, THE ART OF WAR, starring Wesley Snipes. In fact, the hero’s motivation turns out to be almost purely political: to save the United Nations from destruction so that it can engage in “aggressive peacekeeping” around the world. Basically, the movie tells viewers that some “right-wing” ideologues are upset about America’s Red China policy for the last 20 years. They have infiltrated the United Nations to destroy an international trade deal with China and, ultimately, destroy the U.N. itself. To do this, however, the mysterious right-wingers (the movie never tells viewers who they really are) have aligned themselves with a corrupt Hong Kong businessman who’s in bed with international Chinese gangsters. To paraphrase the leader of the infiltrators while talking to the damsel in distress saved by the hero, “We are the people who protect America from democracy.” Never mind, of course, that the United Nations is not really a democratic institution because the Secretary General of the U.N., portrayed in the movie by Donald Sutherland, is not an elected position!

Thus, the humanist worldview of THE ART OF WAR not only supports large, godless world government via the United Nations, it also presents a false, completely paranoid view of what it calls “right wing ideology.” For example, why would a person holding such a view conspire with a corrupt Honk Kong businessman who has ties to murderous groups of international Chinese gangsters operating sex clubs? Isn’t a global crime syndicate associated with an international, selfish businessman just as offensive as a world government that looks the other way when faced with the excesses of Chinese Communism?

The question arises, therefore, who exactly is THE ART OF WAR targeting when it refers to “right-wing” conspirators? Apparently, it’s the conservative movement in America that’s upsetting them. If so, then the filmmakers needed to consult with someone who knows what conservatives really believe. Conservatives believe in establishing a constitutional representative republic where governmental power is God-centered, decentralized and limited. Thus, it’s not the “right wing” that wants to protect America from democracy and freedom, it’s the supporters of the United Nations and other unconstitutional international bodies. Of course, some self-proclaimed conservatives may not actually believe what conservatism really teaches, but, if they do, then they have actually betrayed basic conservative principles, or “right-wing ideology” as the filmmakers of THE ART OF WAR put it.

Thus, THE ART OF WAR focuses on the hero’s shaky, superficial political views. It fails to give him a personal moral code that would be attractive to all viewers, not just those on the loony left. Furthermore, the hero at times participates in the brutality he’s fighting, in a revengeful manner. For instance, he shoots a dead thug at least two more times after he figures out that the thug participated in a brutal beating of a female co-worker before he shot her to death.

Not only does THE ART OF WAR advocate a false humanist worldview supporting large, godless world government and an inaccurate, even naïve, knowledge of political ideology, it also includes some gratuitous gore in its strong action violence. Particularly aggravating are a scene where an evil thug repeatedly slams a woman’s head into a mirrored wall and a shot where a woman tries to stop blood from spurting from another woman’s cut neck. In another sequence, the hero ends up in a sex club operated by international Chinese gangsters. During that sequence, viewers get an obscured view of a depicted sex act and an eyeful of upper female nudity, including some nude lesbian embraces. There is no reason whatsoever why this same story could not get the PG-13, or even PG, treatment from Hollywood. George Lucas does it with his action-packed STAR WARS movies, and look how much money they rake in from both male and female viewers!

Despite all of these problems in THE ART OF WAR, it must be said that Wesley Snipes makes a fine spy hero. He should lighten up, however, on his serious, brooding persona. It would make him an more attractive star for this kind of work. Snipes gets lots of capable support from Anne Archer as the right-hand woman to Donald Sutherland’s Secretary General and from Michael Biehn as a covert ops man whom Snipes works with in THE ART OF WAR. What handcuffs these performers aesthetically is a sometimes predictable and overlong tale of a good, courageous man on the run from evil, dark forces. The movie’s convoluted conspiracy revelations also leave some plot holes that may perplex some viewers once they emerge from the dark, air-conditioned womb of their local movie theaters.