"A Self-Help Guru and a Therapist Clash Over Romance" 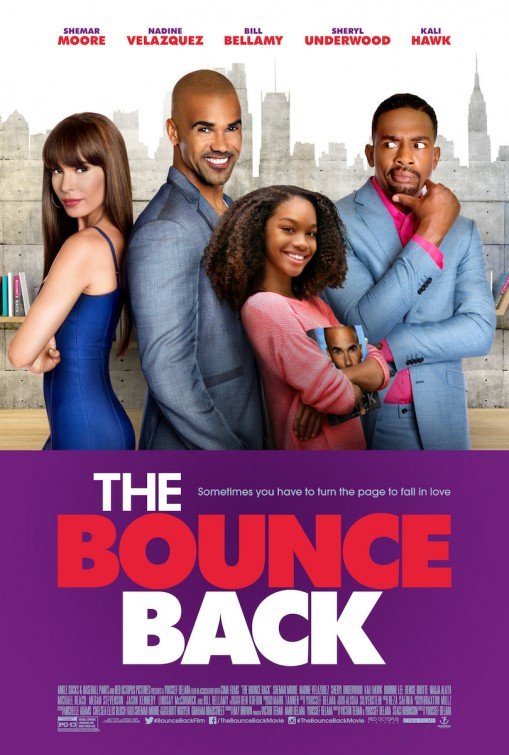 In THE BOUNCE BACK, Matthew has just published his new book by the same name, which is all about bouncing back from a bad breakup. His business manager is working to get him national exposure by booking him on the talk show circuit. Undermining this plan is a licensed therapist named Kristin, who thinks Matthew’s message is pure propaganda. In order to stir up drama, the various talk shows begin booking Matthew and Kristin together, and they soon find themselves gaining fame as a quarreling duo on the subject of love. Their relationship off screen begins to develop romantically, despite their different perspectives on romance.

THE BOUNCE BACK is a run-of-the-mill romance, with a good bit of comedy. The plot isn’t particularly unique, and the story is predictable. At times, it comes off like a cute Hallmark movie, with playful music. However, sexual innuendo is thrown around occasionally, along with some offensive language and vulgarity. Broken families also play a huge role, although the situations are portrayed as working out just fine in the end. THE BOUNCE BACK isn’t a movie for children. Extreme caution is advised.

(H, Pa, LL, V, S, N, A, DD, MM) Primarily a godless, humanist worldview, and some characters pursue pleasure without adhering to any moral standards; nine obscenities and nine profanities; a man gets hit by a car but is not injured; implied fornication when unmarried is shown in bed after a sexual encounter, and an unmarried couple is shown in bed about to have a sexual encounter; man is shown without a shirt in several scenes, a woman strips down to her underwear in one scene; some light alcohol drinking is shown; no smoking, but a woman takes a pill to help her relax, and she ends up falling asleep during a romantic encounter; and, several couples are divorced and unmarried couple lives together.

THE BOUNCE BACK is about a self-help guru, who travels the country promoting his new book, while falling for a therapist, who publicly criticizes his work.

Matthew is a handsome, self-help guru whose newest book, “The Bounce Back,” has just hit bookstores all across the country. It claims an innovative approach to bouncing back after a painful breakup by ignoring the past and pretending it never happened. His good looks spellbind women into listening to his message, which he’s promoting during appearances on local talk shows. However, Matthew’s manager, Jerry, thinks his limited success is not enough. In fact, Matthew’s book has fallen a few places in the best-seller list, moving their plans backwards. The only way to get back on top is to gain national exposure on the biggest talk shows.

Kristin, a licensed therapist, catches Matthew on the television in her office one day. Her patients dealing with lost loves seem to be buying into Matthew’s philosophy and begin dismissing Kristin’s own professional advice. As a result, business declines slightly, and she finds herself taking a back seat to an untrained relationship “expert.” The more she hears about Matthew’s book and his ideas about dealing with breakups, the more annoyed Kristin gets.

On a weekend trip with her friends, Kristin is dragged to one of Matthew’s seminars at a hotel. There, she confronts him face-to-face and calls him a propagandist who’s manipulating people into believing lies. Someone in the audience records the confrontation and posts the video online.

The talk show producers start to get wind of Kristin’s video. As Jerry tries to book Matthew on their shows, they refuse to take him unless Kristin joins him to offer a counter view. Although Jerry is adamantly against the idea, Matthew is secretly attracted to Kristin and agrees to do it. They set off on a multi-city tour, pretending to dislike each other on television, while their personal relationship begins to develop romantically off screen.

Things get more complicated when Matthew introduces Kristin to his 13-year-old daughter and ex-wife. When Kristin tell him she’s falling in love, Matthew unexpectedly pulls back and starts to realize that his whole premise in his book might be a lie.

THE BOUNCE BACK is a run-of-the-mill romance movie, with a good bit of comedy placed throughout. The plot isn’t particularly unique and very predictable. At times, it comes off like a cute Hallmark movie, with playful music as the backdrop of perfectly innocent scenes. In fact, it looks and feels more like a made-for-TV movie with a story and budget not quite big enough for the big screen. The movie tries to oversell Shemar Moore as a heartthrob, offering him plenty of opportunities to flash his muscular chest and abs. It’s clear the producers were intent on using him as bait to lure in as many women as possible.

THE BOUNCE BACK is about moving forward from a breakup, whether after divorce or a long dating relationship. Sexual innuendo is thrown around occasionally, along with some offensive language and vulgar jokes. There are a couple sex scenes. Though they’re not graphic by any means, they imply sex or the intent of sex between unmarried and married couples.

Broken families also play a huge role in the plot, although the situations are portrayed as working out just fine in the end. A young girl is shuffled between her mother and father, and must deal with their new partners. She treats her situation as normal, and even encourages her father to get a new girlfriend. A few alcoholic drinks are shown, but are a non-factor. A woman ends up taking an anti-anxiety pill, which manages to make her act silly and fall asleep at an inopportune time.

THE BOUNCE BACK is not a movie for children. Extreme caution is advised.