"All for One and One for All" 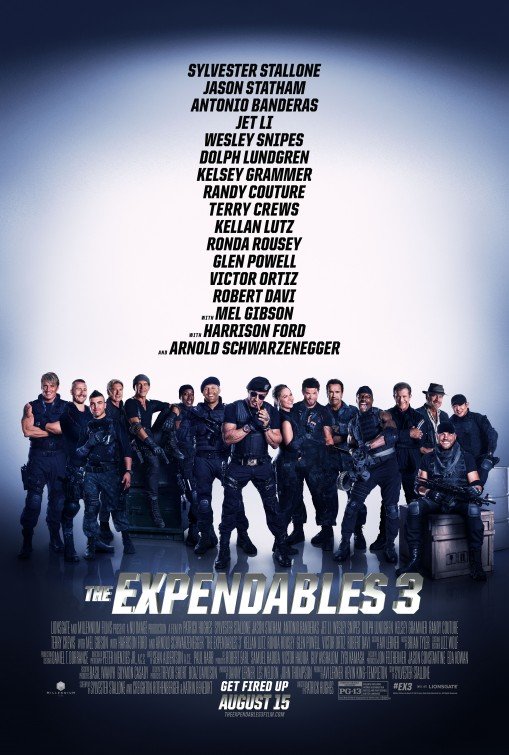 THE EXPENDABLES 3 features an ensemble of veterans and newcomers. After rescuing a former team member, Barney Ross and his mercenaries must take down a ruthless arms dealer. Barney discovers the arms dealer is none other than his former partner and friend, Conrad Stonebanks. Conrad went rogue. Barney thought he had killed him, but that wasn’t true. The CIA orders Barney to take Conrad alive, but Barney refuses to risk the lives of his friends. So, he creates a new team of young mercenaries with nothing left to lose. Conrad kidnaps them; so, Barney decides to rescue them all on his own, but his old team members won’t let him.

The stars in EXPENDABLES 3 are at the top of their game, and the story and action are somewhat compelling. Even better, the movie attempts a moral worldview, with some positive Christian, biblical references. This gives the movie a few uplifting moments. However, the amount of foul language, gunplay and fighting may influence younger or susceptible viewers. So, MOVIEGUIDE® advises extreme caution for THE EXPENDABLES 3. This isn’t a movie for children.

(BB, C, PP, Pa, FR, LLL, VVV, A, D, M) Strong moral, biblical worldview with some light Christian, redemptive allusions and content, including allusions to the Bible’s Cain and Abel story and one soldier makes the Sign of the Cross before one skirmish, plus an American CIA leader turns out to be heroic as well as patriotic, marred by lots of foul language and violence, including lots of gunplay, as well as some reference to luck, charms and skull symbols; at least 56 obscenities (including one “f” word), five strong profanities and two light profanities; lots of intense war fighting includes lots of gunplay, people shot dead, explosions, MMA-style fighting with punching, martial arts fighting, man put into hospital after being shot in chest and leg, train rams into prison, and prison explodes, tanks fire canon at people and building, van crashes, helicopters crash, kidnapped mercenaries are strung up by their arms into painful positions, platoons of soldiers involved in the fighting; no sex; no nudity; some alcohol use; smoking cigars, but no drugs; and, people kidnapped and held hostage with implied light torture, illegal arms sales, arms dealer has a small corrupt army to do his bidding.

THE EXPENDABLES 3 has a smashing ensemble of veterans and newcomers, who develop slowly, but finally deliver a relentless, intense shoot-em-up with some nice character interludes. There is, however, a lot of gunplay and macho foul language, plus some MMA, martial arts combat.

The movie opens with Barney Ross (Sylvester Stallone) leading his crack team of mercenaries, The Expendables, to get a former Expendable out of prison after eight years. Barney has finally gotten a lead on the prison where his former friend is being transferred. So, he and his team stage a spectacular rescue against the train providing the transport.

After getting reacquainted with his friend, Doc (Wesley Snipes), Barney leads his team to their next job for the CIA; stopping an arms dealer supplying high-tech weapons to terrorists and other vicious goons. Barney discovers the arms dealer is none other than his old partner, and co-founder of The Expendables, Conrad Stonebanks, played by Mel Gibson. Conrad had turned rogue more than 10 years ago, which forced Barney to kill him…or so he thought.

Conrad gets away a second time, however. Knowing how deadly Conrad really is, Barney decides to ditch the veterans on his team and create a team of newcomers with nothing left to lose. Barney’s old friends are really upset about his decision, but they are glad to help Barney when Conrad manages to turn the tables on Barney and capture the members of his new team. “You want them; come get them,” Conrad taunts Barney. Of course, Barney is happy to try to get them back all on his own, but his friends, and brothers in arms, won’t let him.

A battle to end all battles ensues, as Barney and his band of brothers confront Conrad and the minions at his command.

EXPENDABLES 3 has a big cast of heroes, especially when they add three young newcomers to an already bloated list of heroes. Except for a couple minor quibbles (Jason Statham has some nice lines in the picture, but the movie features none of the trademark fight moves he displayed in the TRANSPORTER movies, for instance), the movie pretty much succeeds in giving every star his or her moment in the sun.

EXPENDABLES 3 has its highlights.

First off, Antonio Banderas almost steals the picture. He creates a very funny, gregarious ex-soldier who just wants a chance to be on Barney’s team. When Barney finally agrees, his reaction is priceless. Harrison Ford replaces Bruce Willis as the CIA contact for The Expendables. He brings his trademark gruff but lovable scowl to the picture. To top it off, he does some fancy moves piloting a helicopter that are purposely designed to remind viewers of Han Solo’s tricks with the Millennium Falcon in the STAR WARS movies. Those are some of the most fun moments in the whole movie, especially for STAR WARS fans. After a jail stint due to the IRS, Wesley Snipes makes his return to action movies as Doc, the man rescued from jail by The Expendables. After eight years in jail, Doc has gone a little stir crazy, and Wesley manages to capture that madness to fun effect. Kelsey Grammer, who played Frazier the snooty, wacky psychiatrist on TV and is now part of the X-Men and TRANSFORMERS franchises, plays an old friend of Barney’s who helps Barney recruit the new team of young Expendables. Kelsey and Sly Stallone manage to create a strong chemistry between each other that helps the audience believe that the friendship between their characters is a long and beloved one. Finally, there’s Mel Gibson, who returns to action movies playing the ruthless villain, Conrad Stonebanks. As the villain, Gibson shows why he became such a popular star to begin with in the 1980s. He makes a great, formidable villain, and the confrontations between he and Stallone are very much a highlight.

In EXPENDABLES 3, the basic theme is the connection the heroes feel toward one another as they undergo the crucible of combat. Thus, in war, if the other members of your platoon don’t become like a brother to you, then your chances of survival can be drastically reduced. This is a primary theme of most, if not all, war movies, and THE EXPENDABLES 3 is definitely a war movie with a marginal enemy.

This doesn’t mean, however, that the EXPENDABLES filmmakers, working from a story created by Stallone, don’t put their own spin on this timeworn theme. In this movie’s case, the theme is interwoven into the leader, Barney’s, concern that, to track down and take his former partner alive, as the CIA wants him to do, is probably a suicide mission. Feeling that he can’t ask his friends to do that for him, Barney decides to hire a bunch of newcomers with nothing left to lose. Of course, one of the big twists here is that the newcomers eventually just become part of the band of brothers Barney has created. So, to Barney, they aren’t expendable either.

In that light, it’s very interesting, and very important, to note that, EXPENDABLES 3 overtly compares the relationship between Barney and his nemesis, Conrad, to the Bible’s story of Cain and Abel. Like Cain, who felt he was abandoned by his Creator, Conrad came to feel he was abandoned by his country, the United States. So, he turned on his country and turned against his brother-in-arms, Barney. Barney thought he had killed Conrad when Conrad tried to kill him, but, in reality, Conrad was just banished to another, darker world, like Cain. In addition to this biblical theme, EXPENDABLES 3 has at least a couple positive references to God, including one where the Doc character gives the Sign of the Cross before going into one of his character’s many battles.

Sadly, accompanying these elements and themes is lots of strong, gratuitous foul language. There are also a couple very light comments about the “sexy” but tough woman Barney recruits to join their team, but those aren’t lewd or offensive comments. Of course, THE EXPENDABLES 3 also contains lots of gunplay as well as some intense MMA-style and martial arts hand-to-hand combat. The intense violence and fighting isn’t graphic, bloody or gory, but it’s almost constant. The movie also has some references to a lucky charm ring the leader of the good guys wears.

The stars in EXPENDABLES 3 are at the top of their game, and the story and action start slowly and come together in the end. However, the foul language, gunplay and fighting may influence younger or susceptible viewers. So, MOVIEGUIDE® advises extreme caution for THE EXPENDABLES 3. This isn’t a movie for children.