THE HITCHHIKER’S GUIDE TO THE GALAXY

"Bunch of Ideas In Search of a Story" 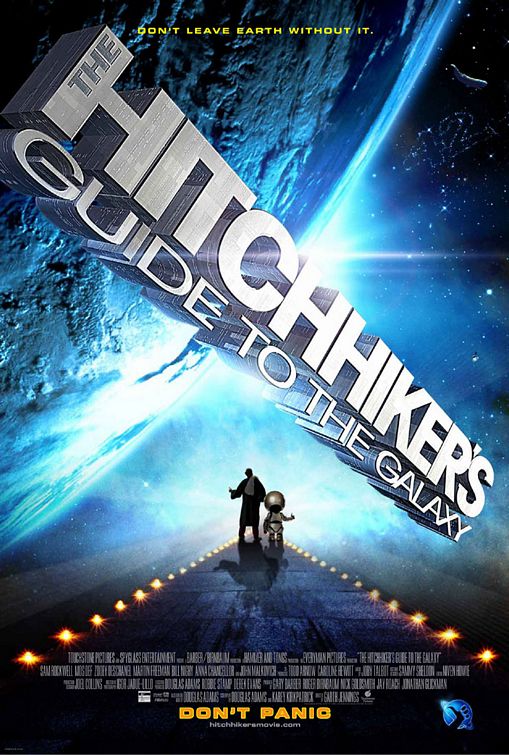 THE HITCHHIKER’S GUIDE TO THE GALAXY opens with a narrator warning us that things are not always as they seem, and suddenly the audience is whisked into an unseemly universe. On earth, Arthur Dent is trying to save his home from being demolished to make way for a freeway, but his problems are far more complex. His friend Ford Perfect rescues Dent in the nick of time, and they hitchhike onto a spacecraft just before the earth is destroyed to make way for a hyperspace expressway. What follows is a disjointed, mediocre, satirical adventure.

HITCHHIKER takes shots at everything, including romantic love (a painful psychological illness), the universe (largely viewed as a mistake), and the earth (easily disposable). The movie mocks God and references ‘God’s greatest mistakes.’ Meant as a satire on the absurd condition of man in the materialist’s cosmology, the movie version of Adam’s story comes off badly and even moderately discerning Christians, Jews, and fans of the book will find aspects of the movie not only disjointed but distasteful and offensive. Throughout, Adam’s satire seeks to drive home a secular worldview, heavy on godless evolution and antagonistic towards religion.

(HHH, EvEv, RoRo, Pa, FR, Ab, Acap, L, V, A, M) Strong humanist, pro-evolution worldview with strong Romantic elements in a heavy satirical tone that includes man being described as a descendant of apes and less intelligent than some other animal forms, satirical scenes worshipping a false god (that mocks Christianity and religion), and questioning and debunking of God and Creation; three mostly light obscenities and one light profanity (for God’s sake); light action violence such as aliens blow up earth and an allusion to a head being cut off; no sex scenes; no nudity, though short shower scene; drinking in excess to get drunk; no smoking, but references to LSD and drugs; and, stealing and evil bureaucrats.

Things are not always as they seem, the narrator of Douglas Adams’ THE HITCHHIKER’S GUIDE TO THE GALAXY warns us lightly, and suddenly the movie whisks us into a universe where nothing could be more true. The story begins on earth where Arthur Dent (Martin Freeman) is trying to save his home from being demolished to make way for a freeway, but his problems quickly prove to be far more complex. His friend Ford Perfect (Mos Def) takes Dent in hand in the nick of time and they hitchhike onto a passing spacecraft just before the earth is destroyed to make way for a hyperspace expressway. What sadly follows is a disjointed, mediocre, only occasionally funny, satirical adventure through the galaxy.

HITCHHIKER is based on the best selling five novel “trilogy” by the late Douglas Adams. Adams, an avowed atheist, wrote the bestselling novels after his stories made a hit on BBC radio in the 1970s. The plays blended silliness, adventure and queries about the nature of the universe, reality and the meaning of life, all in an absurd and deeply humorous manner. Unfortunately, fans of the novel will likely find much to be disappointed about in this sub-par movie adaptation.

THE HITCHHIKER’S GUIDE TO THE GALAXY is chock full of odd characters. The president of the universe, Zaphod Beeblebrox (Sam Rockwell), is a self-absorbed, off-kilter, two headed, half-bright leader, clearly intended by Adams to poke-fun at democratically elected leaders. Beeblebrox and Arthur Dent compete for the affection of Trillian (Zooey Deschaund), a beautiful girl whom Arthur met before escaping Earth’s destruction. In a pointed effort to mock organized religion and, specifically, Christianity, John Malchovich is Humma Kavula, a religious zealot leading his flock (cult) as they await the return of the Big Handkerchief. Additionally, Marvin is the film’s chronically depressed and depressing robot, voiced by Alan Rickman, and Bill Nighy plays Slartibartfast, a renowned planetary architect hired to craft designer worlds for the rich.

But, the galaxy is even more confused than this. Dolphins are more intelligent than humans, and ill-tempered Vogons are Henson-designed bureaucrats who destroy the earth for a highway, can’t spell, and frequently torture innocents with their bad poetry. (Think British civil servants turned patrons of a STAR WARS cantina.)

Nothing escapes the smug satire of Douglas Adams in this absurd look at life on earth and beyond. Paper pushing bureaucrats, half-witted leaders (Beeblebrox alternates between sounding like Bush and Clinton), and a Rodin inspired computer (Deep Voice) which has calculated the meaning of life and disappointed everyone with the silly results.

HITCHHIKER takes shots at everything including love (a debilitating psychosomatic illness which is mostly painful), the universe (largely viewed as a mistake), the earth (easily disposable), and God (who is this god person anyhow?) Of course, everything is meant as a satire on the absurd condition of man in the materialist’s cosmology (a post-ape in a meaningless universe), but the movie version of Adam’s satire comes off badly and moderately discerning Christians, Jews, and even fans of the book will find aspects of the movie not only disjointed but distasteful and offensive. What’s worse, in spite of recognizing the meaninglessness of materialism, Adam’s satire still seeks to drive home a strong secular worldview, heavy on evolution and antagonistic towards religion.

The most interesting aspect of HITCHHIKER’S GUIDE TO THE GALAXY, perhaps, is a question raised mid-way through the movie. The population of the galaxy is obviously (and hilariously) disappointed by the computer’s answer to the meaning of life, but the main characters quickly turn to focus on the question. It’s only when you know what the question is that you have an answer, the movie tells the audience. So to, Christians can be guilty of supplying ready answers to those around them in cases where they would do better helping the lost ask the right questions. Often, nonbelievers ask the wrong questions; we need to love them enough to offer better ones. But, this very slight bit of truth hardly justifies an otherwise confused and unsatisfying satire.