"Compelling, but Marred by Political Correctness and Obscenities" 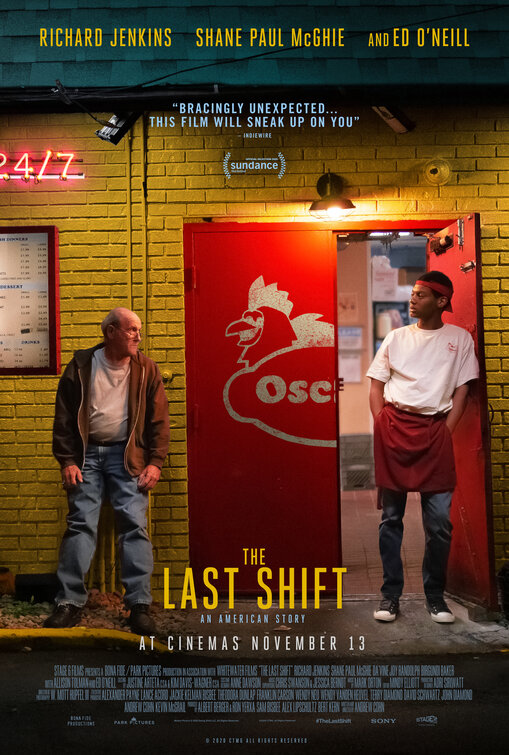 THE LAST SHIFT begins with Stanley, a sixtysomething white man working hard on the graveyard shift at a local fast-food restaurant called Oscar’s Chicken and Fish in Albion, Michigan. Meanwhile, Jevon, a young black man, meets with his parole officer about getting work. He says he’s planning to train at Oscar’s. Jevon needs the job to comply with his parole but also take care of his toddler son and appease his son’s mother. When Jevon shows up for training, the unlikely duo form a camaraderie that makes them think about where they are in their lives. Their differences eventually divide them, however.

THE LAST SHIFT has a well-written story with well-written characters and excellent acting. However, the ending is open ended. Not everything is resolved. Also, the movie’s positive moral elements are spoiled by a Romantic, politically correct, anti-capitalist worldview. Both Stanley and Jevon are victims of the system, though Jevon seems resolved to make things better. THE LAST SHIFT also has lots of foul language, references to drunkenness, brief drug use, and other immoral content. So, MOVIEGUIDE® advises extreme caution.

(RoRo, PCPC, AcapAcap, BB, Cap, C, H, Pa, LLL, V, ,M):
Dominant Worldview and Other Worldview Content/Elements:
Strong Romantic, politically correct, anti-capitalist worldview overall where white man realizes he’s been a chump all his life working for 38 years at a fast food restaurant chain and steals some money but lies about it, which results in the young black man he’s been training being fired instead of him, and black man talks about race, class, “white privilege,” and “white liberal guilt,” mitigated by some strong moral elements about taking responsibility, taking care of family and working hard, plus a comment about “doing the Lord’s work,” young black man shows some immaturity and humanist pride thinking he knows how the world works, even though he’s under 25 years old, and young black man also makes some New Agey comments about the “order” of the universe instead of recognizing a Divine orchestrater
Foul Language:
About 59 obscenities (including some “f” words), one Jesus profanity, seven light profanities, and brief potty humor
Violence:
Character recounts a story about a bus accident, a moving bus takes off a car door, mention of an older woman falling, and a mention of a gang of high schoolers beating an African American student to his death
Sex:
No sex
Nudity:
Upper male nudity in one scene
Alcohol Use:
Mention of drunkenness and a depiction of one drunk man
Smoking and/or Drug Use and Abuse:
Smoking, two young men smoke a joint and one other undefined drug smoked briefly by an inconsequential character; and,
Miscellaneous Immorality:
Teenagers tease an older gentleman, lying, name calling, theft, a side character displays some racism, and an innocent man is framed for a theft.

THE LAST SHIFT is an entertaining, compelling character study about an older white man training his younger black replacement for the graveyard shift at a local fast-food restaurant. THE LAST SHIFT has a well-written story with well-written characters, but the movie’s positive moral elements are spoiled by a Romantic, politically correct, anti-capitalist worldview with lots of foul language, references to drunkenness, brief drug use, and other immoral content, so MOVIEGUIDE® advises extreme caution.

THE LAST SHIFT begins with Stanley, an upper 60s gentleman who’s working hard on the graveyard shift at a local fast-food restaurant called Oscar’s Chicken and Fish in Albion, Michigan. Stanley has been a longtime employee of Oscar’s with 38 years of work to his credit. Meanwhile, Jevon, a twentysomething young black man, meets with his parole advisors about getting work. He says he’s planning to train at Oscar’s. Jevon needs the job to comply with his parole, but also take care of his toddler son and appease his son’s mother.

Jevon shows up for training one evening to the surprise of Stanley. Nonetheless, Stanley seems excited to show Jevon the ropes and assert some professional authority. After 38 years, Stanley’s last shift at Oscar’s is around the corner, and he plans to go to Florida and drink in the sun and help his invalid mother. Jevon is a quick learner. In fact, Stanley’s careful attention to detail at work doesn’t seem to be anything that shakes Jevon’s perspective on the job’s lack of glamor. After, all, Jevon thinks anyone can do this job.

During the long night training sessions, Jevon and Stanley form a camaraderie where they have deep conversations about life, their dreams, pasts, and other similar things. Stanley never graduated high school but still wears the class ring he got as a junior in high school. Jevon has a knack for writing political commentaries, like he did in high school, but doesn’t believe he needs to go to college to further his education. Both men appear to have more to figure out before their next steps in life. For instance, Stanley needs a car to drive to Florida but doesn’t have a license or a car. Meanwhile, Jevon stays resolved that he won’t end up like Stanley, working in the same place for almost four decades, but he’s got his own pride to control.

Tensions come to a high point when Stanley steals money from Oscar’s after Jevon brings attention to the fact that he could’ve made more money over his lifetime in a different place of work. Stanley’s manager asks Stanley if he took the money, but he denies it, which leaves Jevon as the culprit. Jevon gets fired for the theft, despite imploring he’s innocent. Now with Stanley on his way to Florida, and Jevon out of feasible options to appease his parole officer, what will they do?

THE LAST SHIFT has a clever storyline about what a young man and an older man can learn from one another, with just enough serious dialogue mixed in with some funny moments. Overall, the movie has a sizeable entertainment value for viewers looking for a bit of a story-driven narrative. Richard Jenkins is sublime in his role and the perfect choice for Stanley. As Jevon, Shane Paul McGhie is also very good. Stanley’s pal, played by Ed O’Neill, makes sense in his small-town circle.

However, the ending is too open ended. [POSSIBLE SPOILERS FOLLOW] For example, it looks as if Stanley, the white thief, will get away with his petty crime, though Jevon’s boss doesn’t report the theft to the police. Jevon’s parole officer hears about the crime, however, so he’s a little disappointed in the young man, though there’s nothing he can do because the crime wasn’t officially reported. Despite all this, Jevon makes the most of the problem and renews his determination to make the most of a bad situation so he can take care of his son.

The ending to THE LAST SHIFT gives the movie a somewhat mixed worldview. Jevon’s character shows some immaturity and humanist characteristics with his pride for thinking he knows how the world works, even though he’s under 25-years-old. Jevon also makes some New Agey comments about the order of the universe, instead of recognizing God. Jevon also brings up a pulsing conversation about race and class that has some strong false, leftist, politically correct elements as well as a scene where he refers to his parole officer as having “white liberal guilt.” That said, both he and Stanley work hard to earn a living. In addition, Stanley takes care of his aging mother while Jevon realizes he has responsibilities as a new father. Ultimately, Jevon seems resolved to make things better for himself and his son. THE LAST SHIFT also has one positive affirmation to doing the Lord’s work. Ultimately, though, the movie’s ending confirms Jevon’s Romantic, politically correct, anti-capitalist views on how race and class in America’s capitalist system ends up keeping people like Stanley and Jevon divided and antagonistic toward one another. THE LAST SHIFT also has lots of foul language, references to drunkenness, brief drug use, and other immoral content. So, MOVIEGUIDE® advises extreme caution overall.