"It’s Never Too Late To Change" 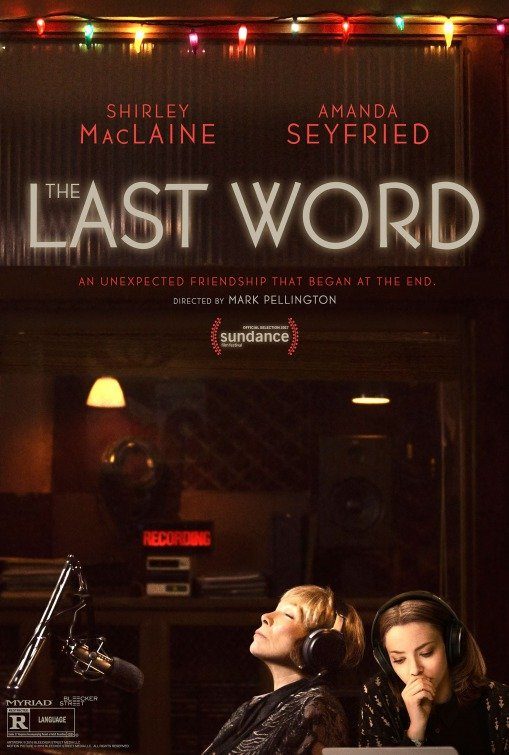 THE LAST WORD is a comedy starring Shirley MacLaine. She plays Harriet, a retired, elderly businesswoman at the end of her life, who wants to be remembered for the good things she did. Harriet seeks out Anne, a feisty local reporter, to write her obituary, but the truth is Harriet has hurt many people in her life, including her daughter. So, with Anne along for the ride, Harriet sets out to reshape her life and leave a good imprint in the world before it’s too late.

THE LAST WORD is an engaging comedy with a stellar performance by Shirley MacLaine. Although the story is sometimes predictable, the filmmakers use witty lines, lighthearted music and upbeat scenes to inject a lighthearted spirit. The story reminds viewers that life is short, but it’s never too late to change, repent and forgive. It has a strong Christian, moral worldview promoting forgiveness through Jesus, love, compassion, selflessness, and prayer. However, THE LAST WORD contains excessive foul language (including a few “f” words), drinking scenes and references to suicide in the beginning, so MOVIEGUIDE® advises extreme caution.

(CC, BB, LLL, V, S, AA, DD, MM) Strong Christian, redemptive, moral worldview promotes forgiveness through Christ, love, compassion, and selflessness, older woman reflects on her life and seeks to do good works before she dies, mother tells daughter she prays for her daily, family sits in church at a funeral, crucifix displayed inside church, pastor leads funeral, and there’s an implication that older woman was an avid church goer; 31 obscenities (including several “f” words); light violence includes references to suicide (woman in a hospital who “accidentally” took some pills with some wine is surrounded by other ill, suicidal patients) and frustrated woman throws spaghetti sauce against a wall; no sexual immorality but a young man and woman kiss on the lips inside a closet after a first date; no explicit nudity, but one scene of young woman in bra and underwear swimming in a lake; strong alcohol use and some drunkenness includes woman drinks a bottle of wine by herself, woman drinks large amounts of wine when she feels lonely, woman drinks whiskey alone in her house and gets drunk, young man and woman drink whiskey at a bar on a date, woman drinks whiskey with co-workers, alcohol is used as coping mechanism; no smoking, but woman overdoses on pills and ends up in hospital but recovers; and, strong, miscellaneous immorality including lying, revenge, envy, and depiction of a dysfunctional family.

THE LAST WORD is a comedy about a retired, elderly businesswoman named Harriet Lauler, played by Shirley MacLaine. Harriet started a successful company and has a beautiful home and plenty of money, but she’s not happy. She’s divorced, deprived of friends, and hasn’t seen her daughter in years. When feelings of self-pity and loneliness creep on her one night, she tries to take her own life by overdosing on pills with red wine. When she wakes up in the emergency room still alive, she decides to make a change in her final days on Earth. She seeks out the local obituary writer, Anne (Amanda Seyfried), and demands she writes her obituary now so she can make sure it sounds good.

Reluctantly, Anne agrees to write the living woman’s obituary, but only after Anne’s boss begs her to in hopes that Harriet might donate some money to keep the paper alive. Anne interviews everybody close to Harriet, but what she learns is this woman was nothing but a hard-headed, tough, self-righteous person. Nobody has anything kind to say about her.

Anne writes a generic obituary and gives it to Harriet to read. Harriet is horrified by how plain it sounds and demands Anne write something inspiring and heartfelt instead. Anne, a passionate writer and stubborn woman herself, refuses to write only the truth. Harriet has only one choice: to make her final days on Earth count.

So, Harriet recruits Anne to join her journey to rewrite Harriet’s past. At first, the two women don’t see eye to eye. Anne thinks Harriet is too particular and uptight, while Harriet sees Anne as a moody, immodest lady. Along the way, however, the two women develop an unbreakable friendship.

Anne watches Harriet walk into a radio station and demand to be a disc jockey, her secret dream job. Then, she accompanies Harriet as she walks into a low-income school and recruits a fatherless, low-income, African-American child to help mentor. Finally, she watches as Harriet calls up her ex-husband and daughter to make amends. Through these interactions, Anne develops respect and adoration for Harriet. Anne, whose mother left when she was a baby, gains confidence and a new feeling of self-worth after Harriet pushes her to be better, put herself out there, and never take no for an answer.

Despite some cheesy lines and predictable scenes, THE LAST WORD is an engaging comedy with a stellar performance by Shirley MacLaine. The ending is uplifting and rather moving. Although the subject matter is heavy, the use of some witty lines, lighthearted music, and scenes involving an upbeat road trip, dancing and diner scenes give the movie a light-hearted spirit. Ultimately, the filmmakers remind viewers life is short, but it’s never too late to change, repent and forgive. This positive message gives the movie a strong Christian, moral worldview overall that promotes the value of prayer to help people get through tough times. The movie also includes some other Christian references and content. However, THE LAST WORD sadly contains an excessive amount of foul language. That language, the references to suicide in the beginning and some excessive drinking warrant an extreme caution for THE LAST WORD. A few changes would have made THE LAST WORD more accessible to family audiences, and given it a better chance of making more money.