THE MAN WHO WASN’T THERE 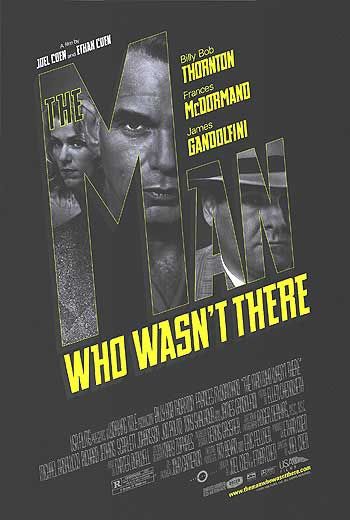 THE MAN WHO WASN’T THERE tells the story of Ed Crane, a quiet barber in Santa Rosa, Calif., who gets involved in blackmail, murder and suicide. Dissatisfied with his life, Ed blackmails his wife’s lover, Big Dave, to get money to invest with an entrepreneur named Tolliver. Big Dave embezzles the money but later murders Tolliver and tries to kill Ed. Ed kills Big Dave in self defense, but Ed’s wife is charged for the murder.

The black and white cinematography is magnificent in THE MAN WHO WASN’T THERE. The direction is also superb, and the acting is flawless. Billy Bob Thornton gives the performance of a lifetime. In the end, Ed imagines that there is life after death, but does not know what it is. He feels, however, that it must be better than on earth. These spiritual loose ends add to the existential angst in the film, which the Coen brothers state as their perspective toward the story. The morality is ambivalent as is the spirituality. Besides the vacuous philosophizing, there is a lot of strong profanity, a gruesome stabbing and some references to perverse sex in THE MAN WHO WASN’T THERE.

The Coen brothers have produced artistically successful movies. They have won many awards, including the Director’s prize at the Cannes Film Festival with BARTON FINK.

Previous movies have had an incisive wit dependent on a clear moral worldview. O BROTHER WHERE ART THOU? seemed to be searching for redemption and had a Christian worldview. Now, with THE MAN WHO WASN’T THERE, they have entered the realm of the existential. This sequence of philosophical perspectives tracks the career of Woody Allen who went from humanistic, tough moral satire to questioning the idea of redemption (THE PURPLE ROSE OF CAIRO has a clear Christological message) to existential amorality.

The rich black and white movie THE MAN WHO WASN’T THERE tells the story of Ed Crane, a quiet barber in Santa Rosa, Calif., who is almost part of the wood work. Billy Bob Thorton does an incredible job of giving meaning to this taciturn character.

Set in 1949, the movie opens with Ed’s voice over, describing the circumstance of his invisible life. While his partner talks all the time, he thinks, but his thinking is very solipsistic and blind though aware of the world around him.

Ed notes that his wife Doris and he go to church once a week on Tuesday nights to play bingo, but he realizes that she is not concerned with salvation. When Doris has her boss Big Dave and his wife Ann, who is the heiress of a retail store fortune, over to visit, Ed realizes that Doris is having an affair with Big Dave.

One day, a stranger named Creighton Tolliver comes into the barber shop and talks about an opportunity to invest in a new business called “dry cleaning.” Ed decides to become the investor. The entrepreneur turns out to be a “pansy,” as Ed calls him. To get the money to invest, Ed blackmails Big Dave with the knowledge of the affair. Big Dave embezzles the money, but later murders Tolliver and tries to do the same to Ed. Ed kills Big Dave in self defense.

The police incarcerate Doris for the murder of Big Ed because she seemed to have a motive. Ed hires the most expensive attorney from nearby Sacramento to defend Doris. Ed’s boss, Frank, mortgages the barber shop to pay for the lawyer. While Doris is in prison, Ed becomes interested in a young girl who plays classical piano. Doris commits suicide.

Ed takes the girl to Sacramento to be discovered by a piano teacher. The girl has little talent, and, on the way home, she tries to give Ed oral sex. He resists, and they have a car accident. When Ed wakes up in the hospital, the police are there to arrest him for the murder of Tolliver. On death row, he is writing his story for a sleazy men’s magazine.

THE MAN WHO WASN’T THERE is full of Coen brother oddities. Big Dave’s wife believes that aliens killed him because they saw a UFO. Ed goes to a fortune teller to communicate with dead Doris, but walks out, realizing that the fortune teller is a fraud. In the end, Ed imagines that there is life after death, but does not know what it is. He feels, however, that it must be better than life on earth.

These spiritual loose ends add to the existential angst in the film, which the Coen brothers state as their perspective toward the story. The morality is ambivalent as is the spirituality. The Coens say that they want to express post World War II existential dread, but this is not a popular philosophy on which to build a movie, however appealing intellectually. Without a moral perspective, the movie lacks the incisive humor of some of their previous movies, which have relied on the unstated moral perspective to skewer the oddities in life. Compounding the problem, the convoluted plot ends on a morose note.

The most successful Coen brother movies have nailed the endings. THE MAN WHO WASN’T THERE does not. In fact, the ambiguity of the ending is compounded by the implication that Ed may have invented the entire story for the men’s magazine. The attempt to explore existential angst is stated in the dialogue of the attorney that Ed hires: “They got this guy, in Germany. Fritz Something-or-other. Or, is it. Maybe it’s Werner. Anyway, he’s got this theory, you wanna test something, you know, scientifically – how the planets go round the sun, what sunspots are made of, why the water comes out of the tap – well, you gotta look at it. But, sometimes you look at it, your looking changes it. Ya can’t know the reality of what happened, or what would’ve happened if you hadden a stuck in your own GD schnozz. So there is no ‘what happened.’ Not in any sense that we can grasp, with our puny minds. Because our minds, our minds get in the way. Looking at something changes it. They call it the ‘Uncertainty Principle.’ Sure, it sounds screwy, but even Einstein says the guy’s on to something.”

Besides the vacuous philosophizing, there is a lot of strong profanity in THE MAN WHO WASN’T THERE. There is also a gruesome stabbing complete with pumping blood and gurgling; the implication of a young girl trying desperately to give a much older man oral sex; a spiritualist is tried but rejected; UFOs are considered and envisioned in a dream; bingo is seen as the only reason for going to church; smoking is constant; alcoholism is portrayed; and, the plot involves revenge for adultery by blackmailing the adulterer. Of course, this is a conscious film noir where everyone is guilty of something, so these elements may be expected in the movie.

The press material notes that the Coen Brothers are like a well-oiled machine, and they share writing credits, while Ethan is billed as producer and Joel as director. The Coens continue to surround themselves with long-time filming-relationships such as Frances McDormand (Joel’s wife) and Roger Deakins, their Director of Photography.

In spite of the bleak content, the black and white cinematography is magnificent. The movie was shot on color stock and printed on b/w title stock, so it has a rich silky texture. The direction is also superb, with every subtle twist and turn of the plot captivating to behold. The acting is flawless, with Billy Bob Thornton giving the performance of a lifetime. Moreover, the casting is incredible, with everyone fitting their part and creating a look of total authenticity.