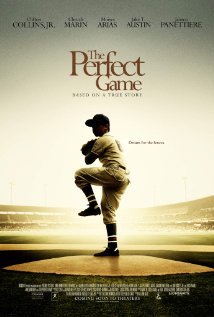 In THE PERFECT GAME, a Mexican immigrant returns to Monterrey, Mexico after the St. Louis Cardinals baseball franchise refuses to make him a coach. He works at a steel plant and tries to drink away his anger. Meanwhile, the local priest wants to find out how to give the children in this impoverished town some hope. He decides to have them play baseball. The priest ropes Cesar into forming a team. They have four weeks to become a Little League franchise. Prayers are answered. Miracles happen. They defeat the Mexico City team and get to go to America. There, they start defeating each American team on their way to the championship.

THE PERFECT GAME is corny up until the end, which hits the emotional ball out of the park. Since audiences are most moved by endings, most people will like this movie. Faith in the movie is very strong. Prayers in the name of Jesus are miraculously answered. Although the faith is so strong, there are some troubling moral moments, including lying and politically correct elements about race and that show capitalism and the United States in an unfair, bad light.

(CC, BB, PCPC, SoSo, AcapAcap, APAP, L, V, S, AA, M) Strong overt Christian worldview with some strong Bible references, lots of prayers, lots of positive descriptions of God and Jesus, strong Catholic priest, strong black minister, but mitigated by many moral problems and politically correct socialist, anti-capitalist, anti-American elements such as mean factory owner, factory goes out on strike to listen to their children play Little League baseball, boy disobeys father to play baseball, coach lies as a major plot device, one lie rebuked but another not addressed, a negative view of legal immigration, a negative view of patriotism, a hostile view toward police, a negative view of the white Little League teams; six light obscenities; very little violence includes boy hit by baseball and boy steps on glass; no overt sex although young Mexican boys who are too young want girlfriends and coach is coached on his love interest by young boy who’s seen as an expert on women; no nudity; lots of alcohol in some scenes, especially to get drunk; no smoking; and, some ritualistic superstitious behavior.

THE PERFECT GAME is a corny television movie up to the very end, which hits the emotional ball out of the park. Since audiences are most moved by the ending, most people will like this movie.

In the late 1950s, Cesar Faz, a Mexican immigrant, is a towel boy for the St. Louis Cardinals. Cesar wants a shot at being a coach. When he’s rebuffed, he heads back to Monterrey, Mexico. He works at a steel plant there and tries to drink away his anger for being treated like an unwanted Mexican in America.

Meanwhile, the local priest, Padre Esteban, is trying to find out how to give the children in this impoverished town some hope. He hits upon the idea, while listening to an American baseball game, of having them play baseball.

As an answer to prayer, one young boy, Angel, finds a real baseball outside the church. He tells the Padre that God gave him a baseball, so God can give him a baseball bat because God is all powerful and can do anything. While practicing his throwing, Angel wakes Cesar up from his drunken siesta. The Padre and Angel rope Cesar into forming a baseball team. They have four weeks to become a Little League franchise. Prayers are answered, miracles happen, they defeat the Mexico City team and get to go to America. There, they start defeating each American team on their way to the championship.

THE PERFECT GAME follows the path of many sports movies but fails to keep in mind that you need jeopardy and danger to hold the audience’s attention. So, some of the movie comes off as corny, some as phony, some as politically correct. By the end of the movie, however, everything comes together in a terrific climax.

Director William Deere does a good job of directing the boys. Cheech Marin plays a terrific priest. Clifton Collins, however, does not show a full range of talent and fails to give life to Cesar, who is the most important person in the movie.

Faith in the movie is very strong. Prayers are made in the name of Jesus. Prayers are miraculously answered. When the Padre has to return to Mexico because of a visa problem, a strong black Baptist preacher becomes the team’s spiritual advisor. Eventually, even the Doubting Thomas comes to faith.

Although the faith is so strong, there are some troubling moral moments. Angel walks out on his father, although they’re eventually reconciled. Cesar lies to the team. One of his lies is rebuked, but another is never addressed. Equality of all people is stressed, but often at the expense of showing all white Little League teams, white policemen, and white newspaper editors as being bigoted, mean-spirited racists. The politically correct anti-white race card is played in the first scene and continued throughout the movie. There are other movies dealing with the same issues, like PRIDE and GLORY ROAD, which much more breadth, depth and less racism. There are also several scenes that seem to have politically correct anti-capitalist and anti-American themes.

Thus, THE PERFECT GAME is a mixed bag. The movie’s Christian worldview and ending are inspiring, but there are holes in the acting and the movie’s politically correct, “social gospel” morality.

Rent or Buy THE PERFECT GAME: