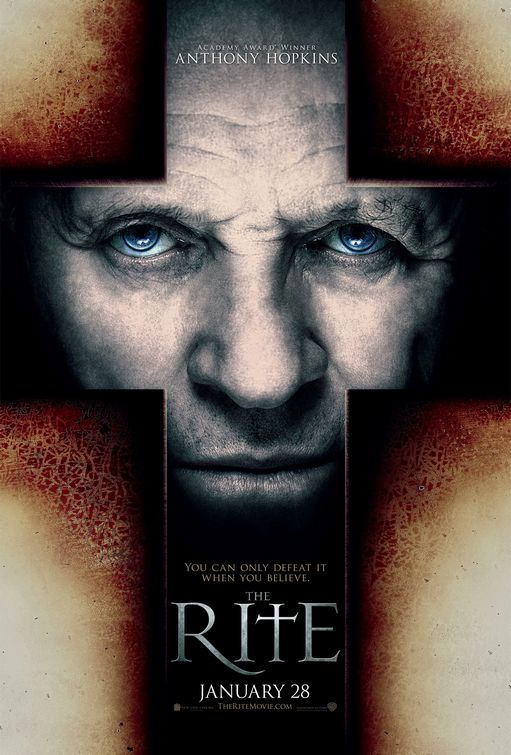 In THE RITE, a young man named Michael leaves home to go to Catholic university. Michael gets a chance to go to Rome, as part of the Vatican’s creation of a training program in exorcism for young priests. Michael looks at the trip as a chance to travel, not to become a real priest. The program’s leader suggests Michael study under Father Lucas, an exorcist of some notoriety played by Anthony Hopkins. Michael’s doubts are challenged by two of the patients under the care of Father Lucas. When Father Lucas shows signs of being affected by his work, Michael has to decide whet he really believes.

THE RITE is a scary, very effective supernatural thriller with genuine, triumphant Christian faith. Although the theology of demonic possession is bent a little for dramatic effect, the movie presents a very intriguing and mostly genuine representation of a Christian view of the spirit world. The overall movie represents a genuine faith journey toward belief in Jesus Christ. As such, it shows a faith that is ultimately triumphant. For this reason, MOVIEGUIDE(r) strongly commends THE RITE, with extreme caution due to scary moments and dramatic exaggerations.

(CCC, BBB, FR, LL, VV, N, A, D, M) Very strong Christian, moral worldview set in Roman Catholic world of exorcism rites with some light exaggerations and false notions for dramatic effect such as the demonic world is a little bit too powerful and depiction of a Christian priest becoming demon possessed, which contradicts Christian and special Catholic doctrine; seven obscenities, three profanities and a few vulgarities; strong intense violence includes violent video game being played on a TV, two accidents involving pedestrians being hit by vehicles with blood on the ground, and some very intense scenes of manifesting demons involving contortions and people being thrown against walls; no sexual content; one with upper male nudity as an older priest has his shirt off while shaving; no alcohol use; smoking nun drives by on the street; and, serious skepticism eventually rebuked and some dramatic exaggerations.

Beginning with the eerie visual of an embalming in process, RITE is the story of a young man who has grown up surrounded by death, in his father’s (Rutger Hauer) mortuary/home. Selling coffins, preparing the bodies for viewings, etc., are part of Michael Kovak’s life.

Michael, a young man in his early twenties, determines his life should take a different path from that of the family business. He leaves home but remains within the family fold religiously by attending Catholic university. He’ll receive a free education, but is expected to take the priestly vows at the end of his four-year study, a plunge he chooses not to take. Michael is a genuinely good guy who truly is uncertain what he in fact believes in regard to faith.

On the last day of classes before commencement, Michael issues an email to his superiors at school resigning from the priestly process. That same day, he is witness to a horrible bicycle accident. One of his teachers, Father Matthew, watches his remarkable response to the victim in the last moments of life and takes a special interest in Michael. When he receives Michael’s resignation email later that evening, Father Matthew sets out to convince Michael of a higher call on his life. He tells Michael that, regardless of whatever doubts he may be struggling with regarding his faith, Michael should consider participating in a special program in Rome through the Vatican.

Ripped straight from the headlines, in 2007 the Vatican received an unprecedented number of reports of demonization. This prompted a new initiative to place an Exorcist in every diocese in the world. The rites of exorcism at that time were almost unknown to most practicing priests. So, there was developed a new training program aimed at raising up a new generation equipped to tackle the issue.

A young man in Rome, Michael considers this more of a free vacation than anything else. He arrives late for his first lecture. Taught by Father Xavier (Ciaran Hinds), the lecture explores both the psychiatric and pastoral implications of their work. Quickly Michael finds himself interjecting things, somewhat at loggerheads with the Father. How can we in fact know when someone is simply in need of psychiatric care and when something “else” is going on?  Michael’s struggle and doubt are obvious to the veteran Father who quickly suggests he meet a man renowned for his effective, albeit often unorthodox methods, Father Lucas (played by Anthony Hopkins).

In the middle of all this, Michael is also in introduced to Angeline (Alice Braga), a reporter investigating the Vatican’s new initiative. Both are approaching this material from various doubts and quickly hit it off. Eventually travelling about Rome as sort of partners in doubt, they are both introduced to the eccentric Welshman that is Father Lucas.

Michael’s first encounter of an exorcism is in the rectory of Father Lucas’ small parish. A mother has brought in her young pregnant teenager, Rosalia, for treatment. What follows is a visceral and disturbing scene when she begins to manifest. At one point, she spits up both blood and nails. Michael leaves the experience befuddled but unconvinced anything more than psychiatric care is truly needed.

He continues to follow Father Lucas on an additional visitation with a young boy who has recurring nightmares, during which Michael’s faith struggle begins to intensify. Afterward, they are called to the hospital ward where Rosalia has been confined, tied down to her bed. Alone in the night, mysterious bugs manifest in her room and she begins to bleed, eventually losing her child.

[SPOILERS ALERT] Michael is deeply shaken by what he encounters, confounded. While seeking comfort in his friend the journalist, together they pass another cyclist accident. He begins to suffer nightmares. He speaks to his father on the phone. Then, moments after the phone call, he receives another call notifying him his father has died of a stroke six hours earlier!

In parallel, Father Lucas begins to display strange behavior, at one point slapping a little girl. He has obviously become something else/someone else. He then is seen wandering barefoot in the cold rain spitting up blood and nails just as Rosaria had done.

A final showdown puts Michael in the position of exorcising his former mentor, Father Lucas. Michael has to decide what he in fact believes.

While a very intense movie, not for the faint of heart, RITE nonetheless presents a very intriguing and mostly genuine representation of a Christian view of the spirit world. The devil is portrayed with cunning and sharp insight into his very nature as the Deceiver. Hopkins portrayal of this aspect of the Devil’s character is remarkable and powerful. Played out within the context of a Roman Catholic theology, elements of the story seems to be more Protestant, in contrast to a Catholic theology that believes an ordained priest cannot sin in his official position. Thus, the priest in this story is flawed, vulnerable and even falls prey to the enemy.

On the other hand, the Bible does teach that a real believer can be oppressed but not possessed, so the movie’s Christian worldview not always theologically consistent. Also, for dramatic effect, the Devil is portrayed as more powerful that the Bible teaches he is.

In spite of these problems, however, the overall movie represents a genuine faith journey toward belief in Jesus Christ. As such, it shows a faith that is ultimately triumphant. For this reason, MOVIEGUIDE(r) commends THE RITE, although please exercise extreme caution due to its scary moments.