THE TEST AND THE ART OF THINKING

"How Justified Are the ACT and SAT College Exams?" 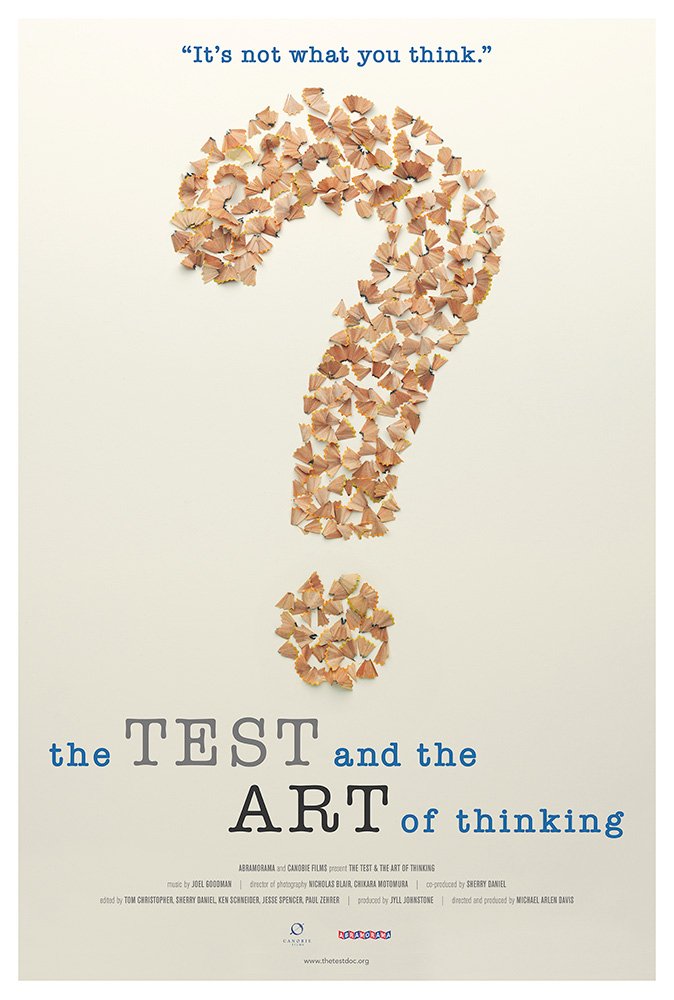 In the documentary, THE TEST AND THE ART OF THINKING, filmmaker Michael Arlen Davis examines how justified the SAT and ACT college entrance exams are in determining a student’s intelligence and how predictive they are of academic success. Each year more than three million high school students take the SAT or ACT. The documentary reflects what this rite of passage college entrance exam reveals about American culture and university system. Using interviews, the filmmakers question whether the tests have any educational value whatsoever.

THE TEST AND THE ART OF THINKING is an engaging, thought-provoking documentary. It uses personal interviews with students, parents, tutors, and academic professionals around the United States to tell its story. Visuals of each child’s city and home life help viewers get a better grasp of how students from various backgrounds feel about these tests. The movie makes some good points, but it’s sometimes redundant as well as a bit one-sided, with some politically correct, shallow comments from a few interviewees. However, THE TEST AND THE ART OF THINKING has no foul language, lewd scenes, violence, or substance abuse.

(B, PC, Acap, Fe, M):
Dominant Worldview and Other Worldview Content/Elements:
Light moral worldview posing some good questions about the two entrance exams many American colleges use on students for their admission policies while asking whether these tests have any real educational value, but about three of the many people interviewed make brief politically correct, anti-capitalist, feminist comments that obfuscate the issues involved and that are ultimately shallow;
Foul Language:
No foul language;
Violence:
No violence;
Sex:
No sex;
Nudity:
No nudity;
Alcohol Use:
No drinking;
Smoking and/or Drug Use and Abuse:
No smoking or illegal drugs; and,
Miscellaneous Immorality:
Some miscellaneous immortality includes greed, selfishness, and allegedly unfair business practices, plus documentary is a bit one-sided and doesn’t consider other evidence contradicting some of the attacks on the college entrance exams in question.

Each year more than three million high school seniors take the SAT or ACT, a mandatory college entrance exam required for admissions for most four-year colleges in the United States. THE TEST AND THE ART OF THINKING is an educational documentary that explores the history of the test and examines how accurate it really is in determining a student’s level of intelligence, aptitude and ability.

The SAT and ACT was originally designed to weed out immigrants from taking over jobs and being admitted into colleges in the United States. The test was designed by a scientist, who later admitted to believing what he created was flawed in measuring a person’s intelligence. Harvard University was the first college to start using the test and subtly implied if you want to be more like Harvard and attract intelligent students to your university, you need this test. After World War II, with the advent of the GI Bill, which gave military veterans a college benefits, the test became a national reality and all colleges began requiring it. However, over the years, many students, parents, tutors, and academic professionals have questioned the test’s accuracy. How can you really measure a student’s intelligence and aptitude in a timed four-hour test?

The documentary dives into a series of interviews with major college officials and some of the top-rated ACT and SAT tutors in the United States. The tutors all reveal the same thing that the test is filled with tricks, and, if you know the strategies to master the tricks, you will do well. It’s not about how smart you are; it’s about how clever you are, and how well you know the patterns in the test. For example, unfamiliar words in a possible answer often mean that answer is the right choice. Also, there is a pattern to each multiple-choice question. The choice that’s not aligned with the pattern is usually, once again, the right answer. One female student complains that all these tricks make the test seem more like a game than a real educational test.

This young woman’s comment illustrates the main question in the movie: Do the ACT and the SAT have any real educational value?

However, children from higher-income families have a better chance at getting higher scores because they can afford more expensive private tutors. Students from lower-income families spend more of their money on ACT and SAT prep books because they can’t afford a tutor, but the books don’t necessarily teach the tricks and strategies that best tutors use to help their clients. Thus, the tests have created a billion-dollar industry and favor people with money.

Some of the talking heads contend that the SAT test reflects the American culture’s way of placing a high value on speed and quickness above everything else. The more work you can do in a short time, the better. Hence, there’s a four-hour window to complete the test.

An extremely gifted student tested this theory during the SAT exam’s essay portion. On his first try, he wrote a great, concise essay. The second time he took the test, he wrote an incredibly long, mediocre essay. He scored astoundingly higher on the second test with more words in the allotted time.

The documentary concludes with the statement that human intelligence is richer than these tests can capture. Children put so much pressure on themselves to do well on these tests knowing the higher they score, the more scholarship money they receive. Thus, the filmmakers clearly support places like Bates College and Wake Forest, who don’t require the ACT or SAT test for admission, but let students submit their test scores if they wish. One college administrator, who favors the tests skewers this idea, claiming it’s contradictory. If the tests don’t make a difference in whether a person gains admission, then why allow students to submit their test scores at all?

TEST AND THE ART OF THINKING is a thought-provoking documentary that shows the apparent problems with the ACT and especially the SAT test. It asks some good questions but is sometimes redundant and a bit one-sided. MOVIEGUIDE® would have liked to have seen, for instance, a real in-depth debate on the factual evidence pro and con for these tests by proponents and opponents. Sadly, the filmmakers don’t really provide this.

Also, some of the comments made in the documentary are not convincing or are superficial. For example, one college administrator favoring a test optional system for college admission claims this system allows her college to admit twice as many women as minorities. At a time when many more women are going to college than men, and too many minority students are dropping out of college because they really shouldn’t go to college or need to brush up on their basic skills because of the sub-par education they received in their public schools, perhaps a test optional system has become too biased in the other direction. The male-female issue is particularly vexing because it’s been proven scientifically that men and women have different aptitudes and abilities, which suggests that, perhaps, our American education system should develop a theory of education that addresses such differences so that both men and women have equal educational opportunities.

Finally, THE TEST AND THE ART OF THINKING has no foul language, lewd scenes, violence, or substance abuse. It asks some good questions and makes some good points, but it could have been better, more informative, and more detailed.

Of course, the “one-size-fits-all” approach to education of the SAT and ACT tests, and places like Harvard, Yale and Princeton, can be questioned from a Christian, biblical point of view. Also, it’s a fact that most American “educators” and “teachers” are unaware of America’s Christian, biblical heritage (and that of Western Civilization) and unaware of the truth, beauty and intelligence of the basic laws of logic, Ethical Monotheism, and the Evangelical Christian worldview, including its approach to hermeneutics, the science of interpretation. Consequently, American education, including the ACT and SAT tests, is deeply flawed.

By the way, contrary to what parts of the movie contend, just because students have to study before they take the ACT or SAT tests doesn’t mean the tests are flawed. After all, isn’t studying a big part of the education process, whether or not you’re a Christian?