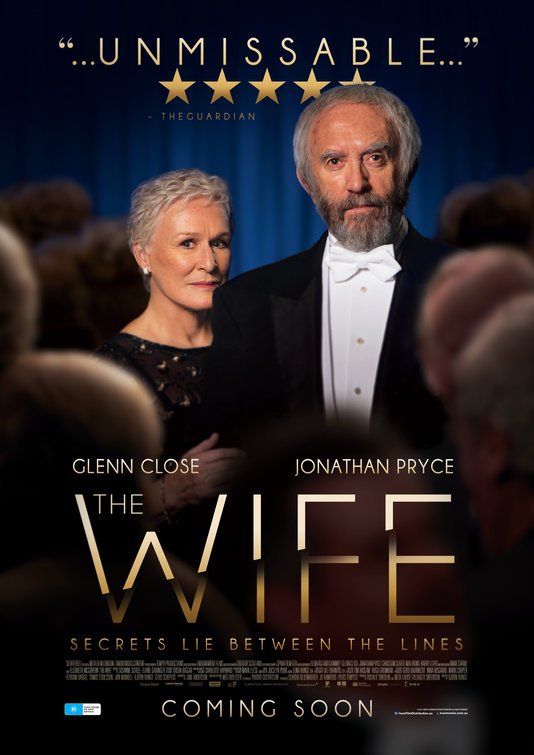 Set in 1992, THE WIFE opens with acclaimed elderly novelist, Joe Castleman, getting a call that he’s won the Nobel Prize for Literature. His joy is short-lived when he talks to his adult son, an aspiring writer who feels Joe belittles his work. Nathaniel Bone, a journalist, wants to write Joe’s definitive biography, but Joe hates Nathaniel and refuses. Joe’s right to be suspicious of Nathaniel. Nathaniel tells Joan, Joe’s wife, that he thinks Joan is the brilliant writer behind Joe’s novels. Nathaniel’s right. So, when Joe flirts with a pretty Nobel Prize photographer, Joan lashes out, and decades of resentment surface.

Veteran actors Jonathan Pryce and Glenn Close deliver dynamic performances as the elderly couple with a huge secret. However, their dialogue is riddled with gratuitous foul-mouthed anger. Also, several flashbacks to their characters in the late 1950s aren’t as compelling. Ultimately, THE WIFE is a shrill, uneven feminist drama that falsely claims serious female novelists weren’t published or celebrated. The creators forgot about the 14 female Pulitzer Prize winners before 1950, including Pearl S. Buck, winner of the 1938 Nobel Prize.

(RoRoRo, FeFeFe, RHRH, LLL, V, SS, N, AA, D, MM):
Dominant Worldview and Other Worldview Content/Elements:
Very strong Romantic, feminist worldview that flips the feminist script that a man is in the background tending the home while the woman is the real genius in the family, but the wife never gets the credit she’s due, and their marriage breaks down after long years of injustice and resentment;
Foul Language:
At least 59 obscenities (about half or so “f” words), eight strong profanities (five Jesus profanities and three GDs), and 19 light profanities;
Violence:
Man angrily throws a medal out the window of his limo, and man has a heart attack;
Sex:
Briefly depicted marital sex under covers, briefly depicted adultery and discussion of husband’s many infidelities against his long-suffering second wife (his former mistress), plus a scene where husband kisses a younger woman but decides not to continue the budding adulterous fling;
Nudity:
Upper male nudity in one scene;
Alcohol Use:
Alcohol use and brief drunkenness;
Smoking and/or Drug Use and Abuse:
Smoking but no drugs; and,
Miscellaneous Immorality:
Resentment, deceit, sexism, some rude behavior, married couple argues intensely.

THE WIFE is a drama about an acclaimed novelist who gets the Nobel Prize, but the prize turns out to be a sham that’s built up resentment between the man and his wife, the real genius behind all the acclaim. Based on a novel, THE WIFE is a feminist tale designed to reverse allegedly traditional male/female roles to make ironic political points about the mistreatment of women, but there’s lots of poorly-written foul-mouthed anger, the acting is uneven, the movie’s feminist perspective displays some false leftist revisionist history, and the movie sometimes rings a bit false and overly manufactured or artificial.

The joy is short-lived on the plane to Stockholm when Joe talks to his adult son, David (Max Irons), an aspiring writer who feels that Joe belittles his work. David acts resentful and sulks when they speak. Another man on the plane is Nathaniel Bone (Christian Slater), a journalist who wants to write Joe’s definitive biography. However, Joe hates Nathaniel and considers him a pest. It turns out Joe is right to be suspicious of Bone when Bone cajoles Joan into secretly meeting him for lunch and revealing his theory that Joan is the brilliant writer behind Joe’s novels.

Of course, Bone doesn’t know the half of it. So, when Joe starts responding to the flirtatious attention the pretty Nobel Prize photographer shows him, Joan decides she’s tired of being the self-sacrificing genius behind the throne. She lashes out, and decades of resentment and quiet suffering turn into a smoldering, then raging, fire.

It almost goes without saying that veteran actors Jonathan Pryce and Glenn Close deliver dynamic performances as the elderly couple whose bickering begins to overcome the love they still seem to share. Sadly, some of their dialogue is greatly overwritten, becoming riddled with lots of gratuitous foul-mouthed anger. Also, several flashbacks to their characters in the late 1950s and early 1960s, when Joe was Joan’s college writing teacher and a love affair developed between them that broke up Joe’s marriage, are not as compelling or well-acted. Ultimately, the Faustian bargain that the younger Joe and Joan make between them about writing and editing Joe’s novels doesn’t ring quite true. Neither does Joan’s sudden rage against this bargain in Stockholm, and against Joe personally.

Ultimately, the story in THE WIFE is meant to be an ironic feminist tale. As such, it seems designed to reverse allegedly traditional male/female roles to make ironic political points about the mistreatment of women before the 1960s. For example, the movie eventually reveals that Joe has become the housewife in the family home, taking care of the house and children and proofreading his wife Joan’s writing, while Joan is the true breadwinner, the one with real talent. In presenting this story, the movie invents the idea that, even in the late 1950s, serious American women writers were virtually unheard of and could not get published.

This is false, leftist revisionist history.

The female novelist Edna Ferber won the Pulitzer Prize in 1925 for her novel SO BIG. Some of her other novels, such as CIMARRON and SHOW BOAT, were highly acclaimed bestsellers. Farber was still publishing in the 1950s, as were serious women writers like Iris Murdoch, Doris Lessing, and Flannery O’Connor. Of course, Margaret Mitchell won the 1937 Pulitzer Prize for her magnum opus, GONE WITH THE WIND. Also, Carson McCullers’ 1940 novel, THE HEART IS A LONELY HUNTER, was a highly acclaimed novel. Her novel, MEMBER OF THE WEDDING, later became a celebrated 1950 Broadway play, and a celebrated movie. Finally, last but certainly not least, Pearl S. Buck’s novel THE GOOD EARTH won the Pulitzer Prize in 1932, and, in 1938, Buck became the first American woman to win the Nobel Prize in Literature.

So, while it probably and certainly was easier for serious male writers to get published and find critical acclaim, it was far from impossible for female writers to do so, especially good ones. Thus, this story’s main premise is based on a modern feminist lie, one of many lies told by modern feminists since Marxist activist Betty Friedan published her phony feminist diatribe, THE FEMININE MYSTIQUE, in 1963.

For all these reasons, the drama in THE WIFE seems manufactured and artificial. The movie’s gratuitous foul language just makes the movie seem even worse.