"A Baseball Legend and His Wife" 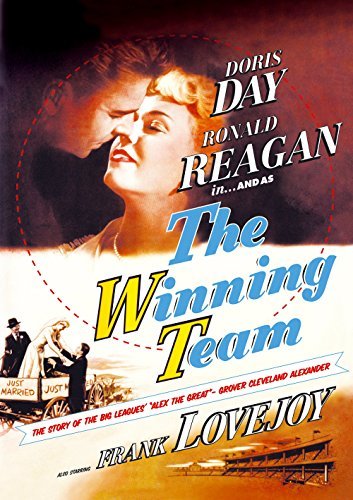 THE WINNING TEAM is a classic 1952 movie based on the life of Grover Cleveland Alexander, the legendary baseball pitcher of the early 1900s. Alexander is in the Baseball Hall of Fame because he was one of the greatest pitchers in history and called the greatest master of control. Not only was he one of the best, but he also kept coming back even when he faced physical adversity. Alexander keeps on pushing and fighting to do what he loves, with help from his wife.

THE WINNING TEAM is a family-friendly movie with positive messages of loving unconditionally, persevering against overwhelming difficulties, working hard, and conquering struggles. Alexander and his wife, Aimee, played by Ronald Reagan and Doris Day, grow a lot and work hard on their relationship with each other. THE WINNING TEAM is intended for all audiences, but parents and younger children might have a hard time with Alexander’s alcoholism being so prevalent in the movie’s second half. Also, Alexander continually makes promises he does not keep. Since Alexander makes many wrong choices, he shouldn’t be praised as an idol.

(BB, CC, V, AA, M):
Dominant Worldview and Other Worldview Content/Elements:
Strong moral worldview emphasizing never giving up on your dreams, overcoming trials, working hard and unconditional love, plus a church service is held in one scene and a reference to St. Nicholas at Christmastime
Foul Language:
No foul language
Violence:
A man gets hit in the head with a baseball and passes out, gunshots are fired during a war, a man tries to punch another man when the other man criticizes him
Sex:
No sex
Nudity:
No nudity
Alcohol Use:
Alcoholism is a major plot point in the movie since one man drinks to forget about his problems and his alcoholism is mentioned often.
Smoking and/or Drug Use and Abuse:
No smoking or illegal drugs;
Miscellaneous Immorality:
A man continually doesn’t keep his promises to his girlfriend and hides an illness from her after she becomes his wife.

THE WINNING TEAM is a 1952 biographical movie featuring former president Ronald Reagan and America’s sweetheart, Doris Day. The movie is about the major league baseball pitching legend, Grover Cleveland Alexander, who is more commonly referred to as just Alexander. Alexander, who is a pitcher, gets hit in the head with a baseball one day, and after his injury, he has many problems he needs to learn to overcome. With his wife, Aimee’s help, Alexander is able to fight against the effects of his injury and achieve great things.

In the beginning of the movie, Grover Cleveland Alexander is a farmer trying to save enough money for a down payment on a home for him and his girlfriend, Aimee, to live in once they’re married. Alexander is a hard worker and loves Aimee, but he also has a passion and a love for baseball, and his priorities seem to be misplaced at first. Alexander decides to go play baseball and forgets all about his commitment to have dinner with Aimee and her father. This causes Aimee’s father to distrust him. When Aimee rebukes Alexander for missing their dinner, Alexander says that baseball will only be a hobby and not be his life. Instead of keeping his promise, however, he ends up making baseball his career. Aimee’s father tells her that Alexander has made too many promises he hasn’t kept. In spite of her father’s warning, Aimee is still in love with Alexander and won’t give up on him.

The characters in THE WINNING TEAM are portrayed very realistically because they have many flaws as well as commendable characteristics. Aimee for instance is very loving and supportive, but she can also be selfish. Aimee admits to her mother-in-law that she was glad at first when Alexander had his accident because it meant she would not have to share him with the Baseball team anymore. Aimee feels guilty though about her initial thoughts and says she’s now willing to do anything to help her depressed husband. Alexander is also not a picture of perfection. He doesn’t handle negative circumstances very well and turns to alcoholism to escape his problems. Alexander also prioritizes his career in baseball above his wife, but he is not without good qualities. Alexander is very passionate, doesn’t give up on dreams, refuses to quit, and is an overcomer.

When Alexander gets hit in the head with a baseball as a minor leaguer, he suffers from double vision and can’t play baseball as a result. Alexander is devastated that his baseball career is seemingly over, which shows that he has made baseball his highest priority in life when it shouldn’t be. His troubles test his endurance and makes him work even harder to succeed. He still believes he can play baseball in spite of his injury and doesn’t accept defeat. Although Alexander’s accident happens in 1909, he has repercussions that occur years later. When Alexander heads off to World War I, a shell hits near him, and he starts having dizzy spells and then later on faints on a regular basis. While sometimes he completely collapses, Alexander takes strength from his wife and learns how to fight off his dizzy spells, a sign of epilepsy.

THE WINNING TEAM is a family-friendly movie with positive messages of loving unconditionally, persevering in spite of overwhelming difficulties, working hard, and conquering struggles. The two main characters grow as they work on their relationship with each other. The movie is intended for all audiences, but parents and younger children might have a hard time with the alcoholism being so prevalent in the latter part of the movie. Also, Alexander continually makes promises he can’t keep and hides the real reason for his fainting from his wife, which creates conflict between them. Since Alexander makes many wrong choices, he shouldn’t be praised as an idol, but his talent as a great baseball pitcher can’t be denied.

Rent or Buy THE WINNING TEAM: