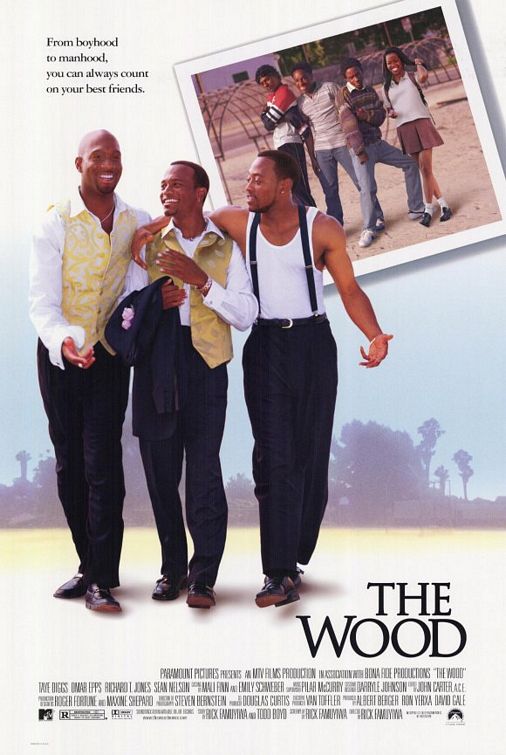 THE WOOD is a winsome coming of age movie about three friends in Inglewood, California who, on the wedding day of one member, recall their boyhood years in the 1980s. Well-written and well-acted, THE WOOD simultaneously creates a Christian worldview with prayers and blessings while undermining it with many obscenities, some strong sexual material and a bad message about when to get married.

THE WOOD is a winsome, happy, coming of age movie about three best friends in Inglewood, California who, on the wedding day of one member, recall their boyhood years in the 1980s. Well-written and well-acted, it simultaneously creates a Christian worldview while undermining it with many obscenities and some strong sexual material.

It is only a few hours away from Roland’s (Taye Diggs) wedding, and he cannot be found. His two friends, Mike (Omar Epps) and Slim (Richard T. Jones), go on the hunt for him. They find him at his former girlfriend’s home, where he is drunk and scared about taking this next step. They whisk him away to sober him up, and, as they do, they remember the good old days in the 1980s.

During the 1980s flashbacks, the narrative focus shifts to Mike. Young Mike (Sean Nelson) has just moved to Inglewood from North Carolina to start high school and doesn’t know the rules of living in Southern California. Happily for him, young Roland (Tren Cameron) and young Slim (Duane Finley) take him under their wing and show him the ropes. Anxious to prove he is “game,” Mike accepts a bet to grab the behind of a female classmate named Alicia (Malinda Williams). Instead, Alicia turns around and smacks Mike, and then Alicia’s thug brother beats Mike up after school. Nevertheless, Alicia realizes that Mike is attracted to her and is not really such a bad guy. This forms a lifelong relationship ranging from being friends to lovers.

Back to the present in Slim’s car, Roland gets sick all over himself and his buddies. They take their clothes off, hose down, take their clothes to the cleaners, and go to a breakfast restaurant to reminisce some more. Eventually, the clothes are cleaned, Roland sobers up, he is taken to the wedding site, they talk some sense into him, and all three friends finish the day with a beautiful wedding.

Unlike BOOTY CALL or PHAT BEACH, THE WOOD is a realistic comedy that is more in the tradition of THE BIG CHILL, NOW AND THEN or even STAND BY ME. Even so, the movie contains some of the stereotypical elements characteristic of the worst African-American comedies, including many obscenities and sexual immorality.

Twenty-five-year-old writer/director Rick Famuyiwa firmly establishes himself as a solid storyteller, although his directing is the weakest part of the story. Many of the culturally defining moments of the 80s, including the start of hip-hop music, seem strangely absent. Acting and writing are top notch, however. Thus, the story and characters are the focus, so perhaps the trappings of the 80s weren’t all that important. After all, the movie is about the friendship of these men and not necessarily the times wherein they lived.

A few other moral points are worth mentioning. The boys refuse to smoke marijuana, and they also shun crime, but their vice is becoming sexually active. They even create a money pot reserved to go to the first person who loses his virginity. Finally, as an adult, Roland seems far too insecure and unprepared for marriage. No doubt, a wedding day can be stressful, but, if he carries such severe doubts that he gets drunk and needs to be talked into marriage, then he really isn’t ready, and that makes the final climax of this movie unsettling, despite the Christian service and prayers. At the end of THE WOOD, Mike asks God to bless this married couple. They are going to need it!