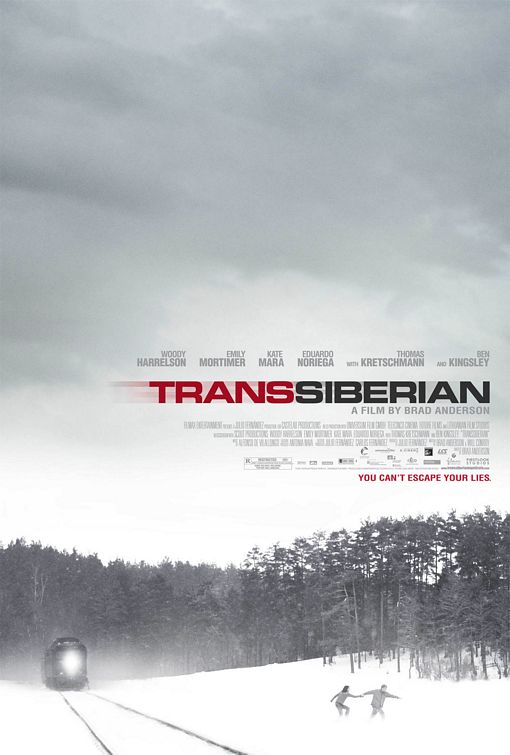 TRANSSIBERIAN is a literate thriller that’s also a character study. Woody Harrelson and Emily Mortimer play Roy and Jessie, a married couple from the Midwest. Roy and Jessie have just completed a mission trip for their church to help poor children in China. Roy’s hobby is trains. He books them on a trip to Moscow via the Transsiberian Express. On the train, they befriend Abbey, a young American woman, and her Spanish boyfriend, Carlos. Carlos and Abbey may be involved in drug smuggling, however. A series of unexpected twists and turns puts Roy and Jessie’s lives in danger. The danger increases when a mysterious Russian detective, played by Ben Kingsley, gets involved.

This movie’s plot develops slowly, but it speeds along at a tight clip in the second half. The problem is, Roy’s wife is torn by her adulterous attraction to Carlos. Eventually, she commits a major crime and keeps lying about it. This puts her husband Roy’s life in danger. Even so, Roy stands by his wife. All this gives TRANSSIBERIAN some moral ambiguity. The movie also contains strong foul language and brief bloody violence. Thus, it merits strong caution.

(Pa, B, CC, LLL, VVV, S, N, AA, DD, MM) Mixed pagan worldview with some moral elements and strong Christian content involving positive Christian characters, including a reference to forgiveness and God’s grace, but Christian man’s wife is troubled, almost commits adultery, commits a major crime, and lies; 22 obscenities (including some “f” words), one strong profanity and seven light profanities; very strong violence when badly beaten woman is tortured with knife in leg wound to get a couple to tell what they know, plus fighting, man bludgeoned to death, frozen corpse apparently has been shot to death, couple threatened with torture and death, shootings; smoldering sexual content includes married woman longs for unmarried man and starts to kiss him but pulls away after apparently coming to her senses though man wants to pursue the kiss and implied fornication between unmarried couple in one scene; upper male nudity and rear male nudity when man asks married woman to use her hotel shower; alcohol use and drunkenness; smoking and plot involves innocents unknowingly getting mixed up with drug dealers; and, lying, deceit, cheating, drug dealer leaves disguised drugs in another person’s bag, police corruption.

TRANSSIBERIAN is a literate thriller that’s also a character study.

Woody Harrelson and Emily Mortimer play Roy and Jessie, a married couple from the Midwest that’s just completed a mission trip for their church to help poor children in China. Roy’s hobby is trains, so he books them on a trip to Moscow on the Transsiberian Express.

The train is not so glamorous, however. Roy and Jessie find themselves sharing a compartment with Abbey, a young American woman, and her Spanish boyfriend, Carlos. The two couples decide to get off at one of the stops along the way, but Roy misses the train. Abbey and Carlos agree to stay with Jessie at the next stop while she waits for Roy.

Jessie seems attracted to Carlos, however, and vice versa. It also becomes clear that Carlos and Abbey may not be the sweet and innocent couple they pretend to be. [Spoilers follow] A series of unexpected twists and turns puts Roy and Jessie’s lives in danger. The danger increases when a mysterious Russian detective, played by Sir Ben Kingsley, befriends Roy on his way back to his wife.

Without giving too much away, Roy’s wife Jessie commits a major crime midway through this picture and then lies about what happened. She keeps lying about what happened even when the Russian detective keeps questioning her and threatens their lives. Yet, Roy remains the faithful husband and sticks by his wife through thick and thin.

Although the movie’s plot develops slowly, it speeds along in the second half at a tight clip. The cast does a good job as well, including Woody Harrelson, who usually plays more sleazy characters. The movie implicitly asks viewers, however, to sympathize with the troubled character of Roy’s wife, even after she keeps lying to her husband and everyone about what happened while she was waiting for Roy to return to her. Eventually, Jessie gets away with a major crime and refuses to tell her husband the truth. On the other hand, Roy’s Christian duty to his wife keeps him from pressing certain issues, even after it is clear that her silence is putting their lives in danger. The movie suggests he knows that Jessie is not telling him everything, but his love and commitment toward Jessie wins out.

Thus, media-wise viewers should have a big problem with how TRANSSIBERIAN’s story unfolds. The movie ultimately leaves it up to the audience what to think about the morality of the characters’ actions. Judging by Roy’s character, however, if Jessie revealed to her husband about the crime she commits, Roy’s Christian integrity might force him to tell the authorities. On the other hand, it could be that Roy stops pressing his wife on what happened because he values his marriage more. In other words, maybe Roy doesn’t wish to know the whole truth, because he loves his wife. Then again, Roy’s doubts about his wife involve her true relationship with Carlos. So, he seems to be trying to save his marriage by protecting his wife’s honor and fidelity to their marriage. It’s hard to say, however, if Jessie has learned her lesson about lying and getting involved with strangers.

All in all, therefore, TRANSSIBERIAN might deserve a second look, despite its problems and despite the foul language, violence and sexual ambiguity that occurs. That said, the movie’s problematic content merits a strong caution.