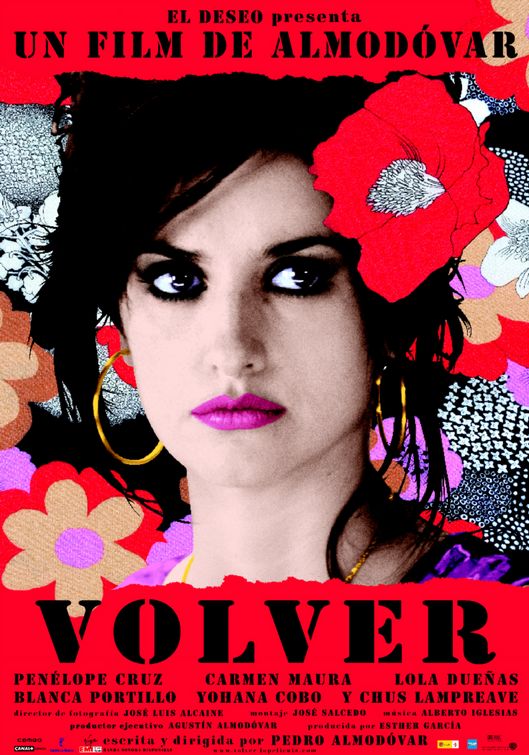 VOLVER is an accomplished, poignant Spanish movie starring Penelope Cruz as Raimunda in a comic tale of family secrets, infidelity, incest, and murder. Set in Madrid and the rural district of La Mancha, VOLVER tells how Raimunda covers up the accidental stabbing death of her husband by her teenage daughter, Paula. Raimunda achieves some temporary financial success while taking care of a restaurant for her neighbor. Meanwhile, Raimunda's sister, Soledad, hides what she believes to be her mother's ghost in her apartment. Eventually, painful memories are evoked and another tale of family secrets, infidelity and murder is revealed.

VOLVER, which means "coming back" in Spanish, has a mixed worldview with humanist, occult, and Christian elements. Christians with a biblical view of ghosts will guess the mystery behind the movie's plot, but VOLVER is more interested in revealing the poignant relationships and missed opportunities behind the mystery. The movie's ending involves some family reconciliation and acts of simple kindness, but deals with mature themes and sinful acts that are not totally resolved in a positive moral, biblical manner. The movie also contains foul language and brief nudity. These elements require extreme caution.

(PaPa, C, B, H, O, Ho, LL, VV, S, NN, AA, DD, MM) Mixed pagan worldview with Christian, moral, humanist, pagan, and occult elements jumbled together, plus two crude references to lesbian sex; seven obscenities (including one "f" word), three strong profanities, three light profanities, and woman sits down on toilet; strong implied violence as woman cleans up and hides accidental stabbing death with pools of blood shown and bloody paper towels shown; man spies on stepdaughter while she undresses, talk about woman working as prostitute to make ends meet, talk about past forced incest, and implied masturbation; brief upper female nudity, side female nudity as woman sits down on toilet, upper male nudity in one scene, and female cleavage; alcohol use and woman appears a bit tipsy during party; smoking and side female character starts to smoke marijuana in one scene; and, lying, accidental death is covered up, murder is covered up, incest and attempted incest are covered up, dead body buried to hide accidental death, and family members keep secrets.

VOLVER is an accomplished, sometimes poignant Spanish movie that at times reminds one of the macabre stories on the old American TV show, ALFRED HITCHCOCK PRESENTS. It is more than that, however. It also gives viewers an insight into the culture of Spanish families living in the windswept region of La Mancha, many of whom have migrated into the working-class neighborhoods of Madrid. Because of their Roman Catholic background, the people have a strong respect for the dead (and death itself), but they also have a superstitious pagan, occult belief in ghosts. This superstition drives some of the movie’s more comical moments.

Penelope Cruze stars as Raimunda, who visits her senile Aunt Paula in La Mancha with her teenage daughter, also named Paula, and her sister, Soledad or Sole. Raimunda asks Aunt Paula’s neighbor, Agustina, to keep watch on her aunt. Agustina says she already has been keeping watch and tells Raimunda that there have been sightings of Raimunda and Sole’s dead mother’s ghost, who died in a fire with their father four years earlier.

Back in Madrid, Raimunda learns that her husband, Paco, has been fired from his job. They get into an argument. Unknown to Raimunda and her daughter, Paula, Paco likes to spy on his daughter while she undresses. Then, one night, Raimunda comes home to find that Paula accidentally stabbed Paco to death when he tried to rape her. As coincidence would have it, their neighbor Emilio has given Raimunda the keys to his corner restaurant, which Emilio has closed down. He wants Raimunda to keep watch on the restaurant while he goes away and tries to find a buyer. Raimunda hides Paco’s body in the restaurant freezer and orders Paula not to breathe a word about what happened. She assures Paula that Paco was not her real father, and that her real father is dead.

Things begin to change for Raimunda. While she’s in the restaurant making sure Paco’s body has frozen, a man appears, saying that he’s shooting a movie nearby. The crew is looking for a dinner at the end of the day’s shooting, he tells her. Raimunda agrees to serve the crew dinner, but just then Agustina calls to tell Raimunda that her aunt has died. Raimunda tells her sister Sole that she cannot go to the funeral and asks her to go instead. While at the funeral, Sole thinks she sees her mother’s ghost. Back in Madrid, her mother’s ghost calls from the trunk of her car to be let out. There, to Sole’s surprise, is her mother. Sole thinks it’s her mother’s ghost, but this is a strange apparition that feels corporeal. Thus, Sole is able to hug her mother.

Sole hides her mother in her apartment and passes her off as a Russian hairdresser she’s hired to help her in the illegal beauty shop she runs out of her apartment. She is careful, however, not to let Raimunda see her mother or the “Russian helper.” This unleashes some humorous misunderstandings. Eventually, however, the truth emerges, painful memories are evoked, and another tale of incest and murder is revealed.

VOLVER, which means “coming back” in Spanish, has a mixed worldview with pagan, humanist, occult, and Christian elements. Christians with a biblical view of ghosts probably will guess the mystery behind the movie’s plot, but VOLVER is more interested in revealing the poignant relationships behind the mystery. As such, it is a very good movie that will grab hold of viewers once things start to happen. One of the movie’s more interesting aspects is its ability to portray the occult superstitions of the people of La Mancha, especially Agustina and Sole, in a way that keeps Christians, atheists and other people who don’t believe in ghosts guessing. Is there something supernatural going on or not? The tale of infidelity, incest and murder lying at the heart of the movie’s mystery shows how keeping secrets about past sins affects our most intimate family relationships. The movie also shows, however, that simple acts of kindness may be the most important way in which people should relate to one another.

VOLVER may win some awards this season for its subtle, unique story of family secrets. Even so, its story deals with mature themes and sinful acts that are not totally resolved in a positive moral, biblical or Christian manner. The movie also contains foul language and brief nudity. MOVIEGUIDE®, therefore, advises extreme caution.