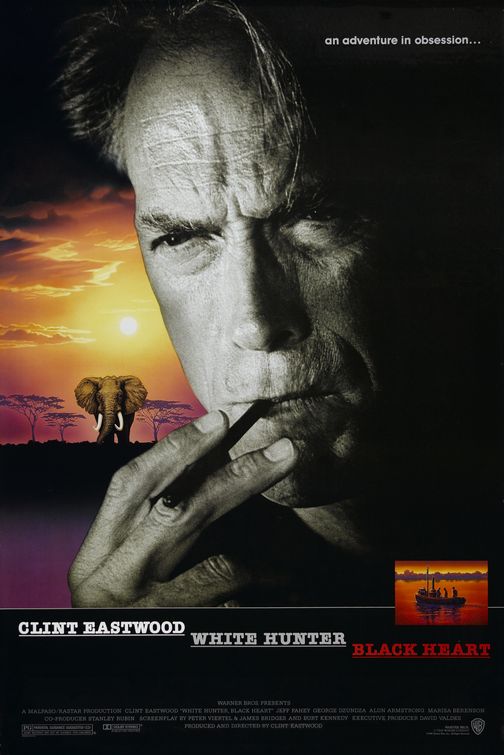 Based on Peter Viertel’s 1953 novel about his experiences with director John Huston while filming THE AFRICAN QUEEN, this tale is a somber attempt to look into the complex nature of the oft-revered, highly problematic film maker. WHITE HUNTER, BLACK HEART is a penetrating story that takes place mostly in Africa, as John Wilson (played by Clint Eastwood) prepares for the filming of his next movie.

Wilson, on the verge of bankruptcy, realizes that only by scoring with a big hit can he survive financially. Self-assured and cocky, he plans for the filming of AFRICAN TRADER, but something more important begins to dominate his life. In fact, the movie project is only a ploy to undertake his real mission, to bag a bull elephant on safari.

This obsession so clouds his vision for the movie that Paul Landers, Wilson’s producer, almost has heart failure over Wilson’s nonchalant, disregard for the project. Arriving in Africa several days before shooting begins, Wilson spends his time in the bush, seeking his prey — a large, tusked, African bull elephant.

The film crew arrives on location. Wilson, with an egocentric attitude which is contemptuous of the people surrounding him, is only interested in shooting with his rifle, not a camera. When the rains come, the movie’s start is delayed by days. Wilson continues the trek to find his trophy. He is about to come to terms with himself and understand who he really is.

The movie captures the grand backdrop of Africa, yet is essentially a study of man’s inner self. The title itself refers to the cold, compassionless “black hearts” in white hunters. There is much to analyze in Eastwood’s portrayal, though his mimicking of John Huston’s mannerisms are somewhat forced. The inner turmoil of a self-destructive genius overshadows the difficulties of shooting a movie in a logistically impossible place. Wilson is a man whose psychological needs are so great that he sets the definitions by which others must act within his own life.

Though the movie works as a “movie within a movie,” it has several levels of understanding. Somewhat an insider’s movie, WHITE HUNTER, BLACK HEART will have a special appeal to those familiar with the life of director John Huston, and specifically THE AFRICAN QUEEN. However, to its credit, the movie avoids all mention of Huston’s half-baked left-wing politics.

The only objection is the foul language. Huston was noted for a salty, caustic manner, which Eastwood has captured. However, regardless of the facts, the profane and obscene language is objectionable.