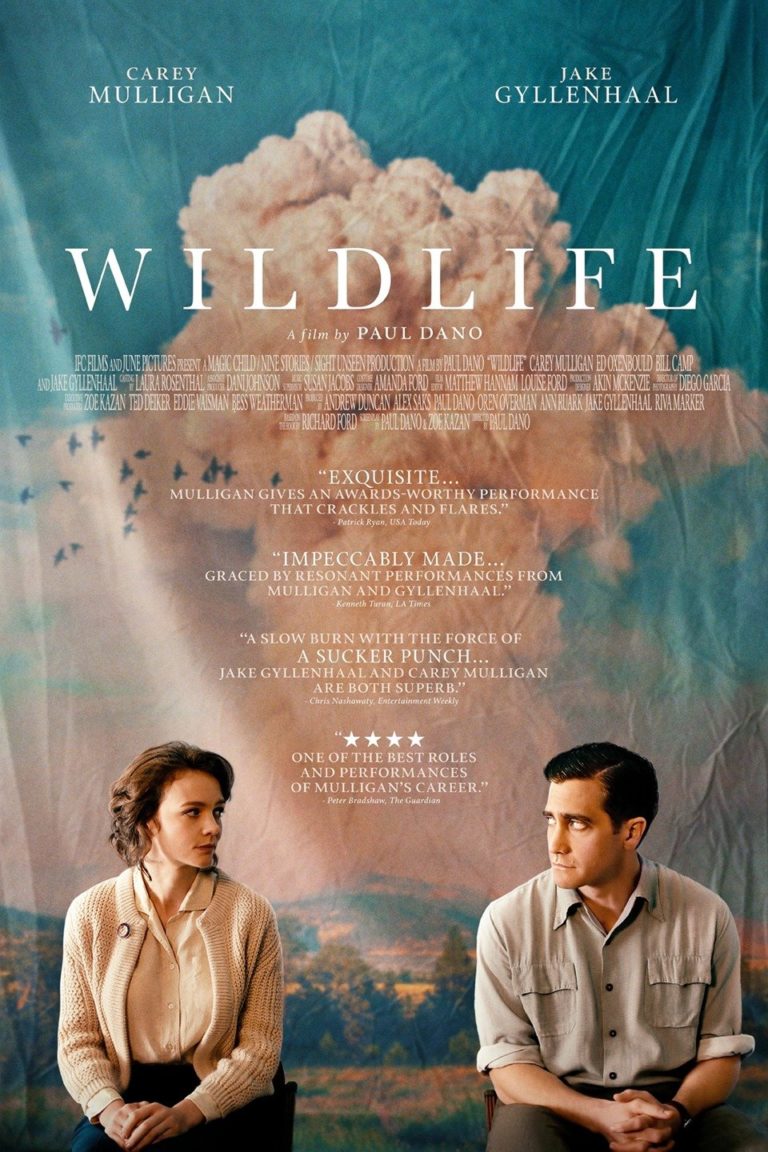 WILDLIFE is a slow-paced movie that tells the story of a struggling family living in Montana in the 1960s. After Jerry is fired, he takes a low-paying job fighting forest fires because he has too much pride to accept his old job. He abandons his family, and his wife goes back to work. She becomes a swimming instructor, which leads to an affair with one students. The movie focuses on their 14-year-old son, Joe, and uses long scenes to show how his parent’s choices affect his life.

WILDLIFE is beautifully shot with scenic shots of the rural Montana mountains. The visuals of the character’s costumes, home and the town give a perfect depiction of the 1960s. Gyllenhall and Mulligan give excellent performances. However, the storytelling aspect is missing. The movie is a glimpse into a young married couples life with their son, but the long-winded, slow scenes become quite stale to watch. This movie is an actor’s medium, and certainly not one with a high entertainment level. Caution is advised for older children due to some foul language, violence and sexual scenes.

(PaPa, Ro, B, L, VV, S, N, AA, D, MM): •
Dominant Worldview and Other Worldview Content/Elements:
Mixed pagan worldview with Romantic, moral elements reflecting principles of love and honoring one’s parents, in the beginning parents truly love each other and do their best to make life easier on the other, wife cooks dinner and encourages husband, husband provides for the family and plays with son in the yard, but human qualities of pride and shame eventually triumph, husband leaves family out of pride, wife commits adultery out of pain, the remarkable note is their son continues to respect his parents despite all the pain they inflict into his life, movie says man is essentially good but his emotions triumph, husband and wife don’t have God in their lives, they do not pray, go to church or read the bible, thus when life gets challenging they react from their emotions and not with the faith that God will provide; •
Foul Language:
Three obscenities (including one “f” word), two strong profanities, and one light profanity, plus a shot of a dirty condom; •
Violence:
Strong and light violence includes husband and old man fight in the snow, they kick and push each other, nobody is severely hurt, but husband comes home with a bloody cut on his head, husband yells at his wife and slams his hands against the wall after he discovers she committed adultery, violent forest fire shots depicted in the woods, and husband lights a home on fire out of revenge; •
Sex:
Married woman dresses up and flirts with an older man in front of her son, married woman wife dances sexually and passionately kisses man, a scene of implied adultery, brief discussion of parents’ sex life; •
Nudity:
Rear-end male nudity after man sleeps with a married woman separated from her husband, shot of a naked woman’s back sleeping in bed, and image of an old man’s naked backside; •
Alcohol Use:
Heavy drinking, husband drinks a couple beers after work, husband buys a six pack of beer with his son and drinks one while driving, and wife gets drunk with wine and whiskey and commits adultery; •
Smoking and/or Drug Use and Abuse:
Parents smoke often in and out of the home in scenes set in the 1960s, but no drug content; and, •
Miscellaneous Immorality:
Strong miscellaneous immortality includes bad role models, dysfunctional family portrayals, lying, and husband travels to the wilderness to work as a firefighter apart from his family and his wife feels abandoned, leading to their eventual divorce

Based on a 1990 novel, and the directional debut for Actor Paul Dano, WILDLIFE is a beautifully photographed piece with excellent visuals and character development. However, the movie moves very slowly with long takes. The narrative depicts a young family’s life in the 1960s as opposed to an authentic story structure with a compelling beginning, middle, and end.

In Great Falls, Montana in the 1960s, life is not easy. Jerry (Jake Gyllenhaall) has recently moved his family, wife Jeannette (Carey Mulligan) and 14-year-old son Joe (Ed Oxenbould) to Montana due to former financial problems. Not long after their move, Jerry gets fired from his job at the country club. The owner calls him back and asks him to return the next day, realizing what a great employee he is, but Jerry’s pride gets the best of him, so he declines the job offer. Jeanette tries to motivate Jerry and help him find a job, but all he does is drink beer and complain about the jobs she finds him. Jeannette steps up in the family and gets a job as a swim instructor to help her family out.

Shortly after she gets her job, Jerry decides to go work with a crew fighting forest fires near the state border for a dollar an hour. Jeannette is deeply hurt that her husband accepted such a low-paying job away from home after all the opportunities she found for him in town. Jerry leaves the family and decides to stay up North to fight the fires. Meanwhile, Jeanette slowly begins to lose it. She becomes romantically involved with one of her clients, an extremely wealthy older man. She takes her son Joe over to his house where they drink wine, dance, and kiss in front of him. Jeanette is eager to show her son she is unhappy and wants him to know what his father did, abandoning the family, was wrong.

When Jerry returns home from the fire-fighting job, his wife informs him she’s leaving him and has purchased her own apartment in town. Jerry is livid. He yells at her and drives to a nearby bar to drink, bringing his young son Joe with him. At the bar, Joe confesses his mom did sexual things with the other man. Jerry is furious and drunk. He leaves the bar and goes to the gas station to get a container of gas. He drives to the older man’s house (with whom his wife slept) and pours it on his front porch. He lights it on fire. The old man rushes out of the house and kicks Jerry down. Joe tries to stop the fight, but he steps back when his dad asks him to help him stand up. Joe realizes his dad isn’t the hero he always thought, and what he did was very wrong. He runs away from him, in the brutal cold and goes to the police station to get away.

When Joe returns home, his worried parents are waiting in the living room for him. They inform him, Jerry will not go to jail because the man decided not to press charges, but the wounds in their family can’t be healed. Eventually, however, Joe learns to still love and honor his parents despite their breakup.

WILDLIFE is beautifully shot with scenic shots of the mountains in rural Montana. The visuals of the character’s costumes, home and the town where they live give a perfect depiction of the 1960s. The acting is on point, with Gyllenhaall and Mulligan giving excellent performances. However, the storytelling aspect is missing. The movie is a glimpse into a married couple’s life with their son, but the long-winded, slow scenes become quite stale to watch. This movie is an actor’s medium, and certainly not one with a high entertainment level.

WILDLIFE has a mixed worldview with Romantic and moral elements. On the one hand, the movie extols principles of love and honoring one’s parents. Also, Joe’s parents at first show love toward one another. On the other hand, their marriage crumbles because of Jerry’s pride and Jeannette’s adulterous affair with her client. The movie also says man is essentially good but his emotions triumph. In addition to its worldview problems, WILDLIFE contains some foul language, violence and sexual content. MOVIEGUIDE® advises extreme caution for older children.