YOU, ME AND DUPREE 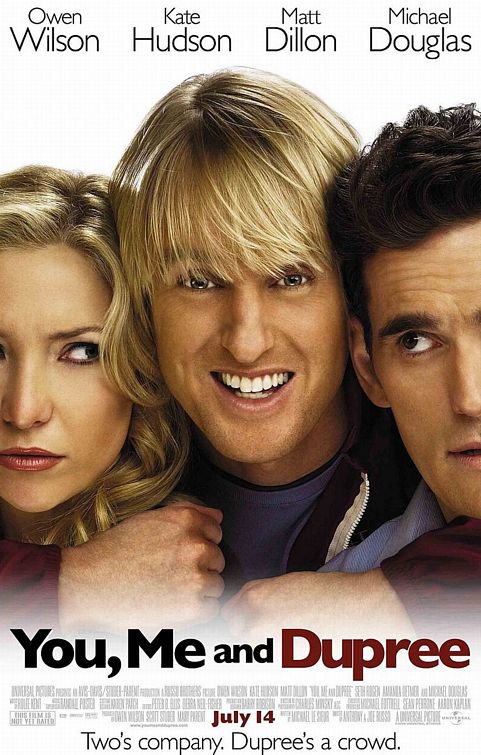 In YOU, ME AND DUPREE, architect Carl Peterson marries his boss’s daughter, Molly Thompson. No sooner have they settled into their home when Carl’s best man, Randy Dupree, loses his job and his apartment. Molly agrees to let Dupree stay for a few days, but Dupree almost destroys their happy home. Eventually, Dupree makes up for what he’s done. Pressures from Molly’s antagonistic father and the sight of Molly responding favorably to the new, improved Dupree becomes too much for Carl. It’s only a matter of time before he blows his cool.

YOU, ME AND DUPREE is a funny character-driven comedy. The relationships between Molly, Carl, Dupree, and Molly’s father are well written and well played by Kate Hudson, Matt Dillon , Owen Wilson, and Michael Douglas. The sexual references in YOU, ME AND DUPREE are too lewd and too many, however. The movie also promotes self-improvement without God, though this theme is used mostly for comic effect, including the final comic twist. Despite many clean jokes, the movie’s sexual content and foul language are too excessive. Thus, MOVIEGUIDE® offers strong warnings to media-wise adults about seeing YOU, ME AND DUPREE.

(PaPa, B, C, Ho, LLL, VV, SS, N, A, D, MM) Mixed, ultimately strong, pagan worldview that promotes self-improvement without God or the Bible and that contains a pagan attitude toward sex mixed with elements of kindness, forgiveness and reconciliation, plus a couple homosexual references in dialogue but not necessarily in a politically correct way; about 24 obscenities, three strong profanities, eight light exclamatory profanities, woman complains about stinky unflushed toilet in one scene, and toilet overflows in another scene but only water is shown overflowing; a couple brief scenes of strong slapstick violence such as angry man leaps over table to choke friend, man hit with heavy candlestick, man falls through ceiling onto table, plus accidental fire destroys living room, some pratfalls, man breaks down door, man hurt in groin, etc.; depicted but visually hidden masturbation, pornography titles read, implied sexual experimentation with butter, references to unseen woman sleeping around, husband mistakenly thinks his friend wants his wife, and a couple light references to homosexuality but not in a descriptive sexual sense; upper and rear male nudity (including man covers private parts with hand or pillow), married woman in underwear, and women in lingerie on porn video covers; alcohol use; smoking cigars; and, husband eventually lies to wife about helping to write thank-you notes for wedding gifts, man living with newlyweds does bad things and other acts without telling or asking them, father-in-law intimidates son-in-law, man sneaks into an office building, and man becomes a self-help guru advocating secular personal improvement that sounds a bit selfish and ego-centered.

YOU, ME AND DUPREE is a funny character-driven comedy for mature audiences, but it contains foul language and several strong, lewd sexual references that make it extremely problematic entertainment for people of faith and moral purity.

The movie opens with pre-nuptial festivities in Hawaii, where Carl Peterson is about to marry his boss’s daughter, Molly Thompson. Randy Dupree, Carl’s best man and long-time friend, belatedly joins the party by helicopter, due to his irresponsible and lackadaisical manner. At the wedding reception, Molly’s father shows disdain for his son-in-law.

After the wedding, the newlyweds settle into their home. They soon discover that Dupree has lost both his job and his apartment, and has no place to go. Because Dupree is a long-time friend of Carl’s, Molly agrees to let him stay in their home for a few days. That changes when Dupree almost burns down their house trying to seduce the librarian at the school where Molly teaches. Dupree thinks he’s found true love with the librarian, but she doesn’t let him stay with her because she likes playing the field (Molly didn’t know about the librarian’s slutty history). Making matters worse is that Molly’s father is giving Carl a hard time at work.

Molly and Carl find Dupree stranded on a park bench in the pouring rain. It is Molly who feels sorry for Dupree, and allows him to come back, but she and Carl set some strict ground rules. This time, Dupree actually starts changing his irresponsible ways. Molly’s father is still trying to intimidate Carl, however, even suggesting that Carl get a vasectomy and hyphenate his name with Thompson.

The pressure at work and the sight of Molly responding favorably to the new and improved Dupree becomes too much for Carl. It’s only a matter of time before he blows his cool.

The relationships between Molly, Carl, Dupree, and Molly’s father are well written and well played by Kate Hudson, Matt Dillon , Owen Wilson (who is very funny), and Michael Douglas. The chemistry between Hudson and Damon doesn’t quite jell, however.

The sexual references in YOU, ME AND DUPREE are too lewd and too many. They include several references to masturbation, crude pornography and sexual experimentation. The movie also promotes self-improvement without God or the Bible. Though this aspect of the plot is mainly used to provide laughs, including the final comic twist, it still can harm the audience’s spiritual development because of its secular nature. A positive aspect of the story, however, is its promotion of responsibility, kindness and especially forgiveness, and the fruits they can bear. A hilarious chase scene at the end provides some good, honest laughs. Despite all that and some other clean comedy, the movie’s sexual content and foul language are too excessive. They don’t drive the plot, but they are strong enough to be annoying and detract significantly from the movie. Thus, MOVIEGUIDE® offers strong warnings to media-wise adults about seeing YOU, ME AND DUPREE.