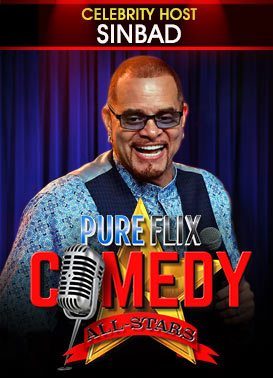 COMEDY ALL STARS is a new Pure Flix original series hosted by legendary comedian Sinbad, who is also the opener for each show.

The beginning of the first episode starts off with Sinbad telling a story to the night’s performers of a time an audience member pulled a gun on him, which is one of the two violent references mentioned throughout the night. Karen Rontowski takes the stage after that, pretty much crushing her set. She makes a robbery joke and a joke about men from online dating sites asking for inappropriate pictures. Nevertheless, she warms up the crowd for the next performer, Chase Anthony. His set speaks on his poor upbringing, which gets the audience rolling in the aisles. Last but not least, the outlandish Dwight Slade takes center stage, making the crowd laugh with his wide range of voice and facial expressions.

(BB, V, S, M) Strong moral worldview, with comedians attempting to keep comedy clean and family friendly; one light OMG profanity, one use of “heck, and one use of “crap”; Sinbad tells a story of a mugging; one female comedian speaks about online dating, mentioning men who ask for inappropriate pictures; no nudity; no drinking; no smoking or drug references; and, a robbery joke is referenced, and one joke about a grandma using Facebook as a dating app and seeking out younger men (Chase Anthony).