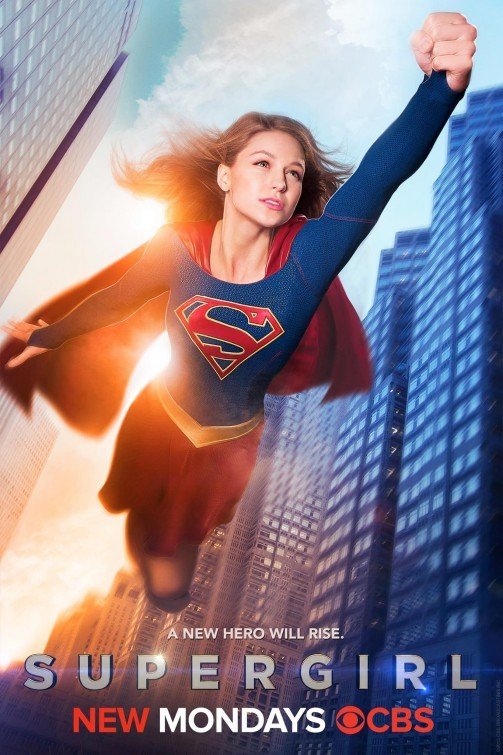 The pilot episode of SUPERGIRL, CBS-TV’s new superhero series, is a modern twist of the classic DC Comic book character. Kara Zor-El, Superman’s cousin, arrives on Earth 24 years later than planned. Superman places Kara with the Danvers family. Cut to present day, where Kara finally accepts her superpowers and starts saving people as Supergirl. She joins forces with a secret government agency to stop a plan by an elite advance force from General Zod to destroy National City. Her sister and the agency’s head agent are concerned that Supergirl isn’t strong enough to stop the male villains from Krypton, who also have some superpowers.

The SUPERGIRL pilot episode is loads of fun and moves briskly from beginning to end. The cast is likable and witty, especially Melissa Benoist as Supergirl. There’s also a strong family component. The special effects are fantastic, especially for broadcast television standards. The pilot episode has a strong moral worldview, mitigated by some Romantic, feminist elements. It also has lots of action violence. So, MOVIEGUIDE® advises caution for older children for the pilot episode of CBS-TV’s SUPERGIRL.

The pilot episode of SUPERGIRL, CBS-TV’s new superhero series, is a modern twist of the classic DC Comic book character. Superman’s cousin Lara Zor-El comes to earth from planet Krypton on a mission to protect her superhero cousin. During her travels, Krypton is destroyed, launching her pod into the Phantom Zone, a region of space that time forgot. After 24 years, a young Kara lands on Earth. Superman finds her and brings her to her adopted parents, the Danvers, scientists who helped Superman discover his supernatural abilities.

Fast forward to present day, where Kara has found a job as the assistant to Cat Grant’s, print and media mogul and CEO of CatCo Worldwide Media. Although she yearns to rediscover her purpose on earth, Cara intends to keep her super powers a secret, until she saves the airplane containing her sister Alex and other members of the Department of Extranormal Operations (DEO).

Desperate to use her powers to help others, Kara reveals her identity to her co-worker, Winn Schott, who vows to keep her identity a secret. He, along with Jimmy Olson, photographer for the Daily Planet and a close friend of Superman’s, also knows her identity and seeks to help her in her endeavors. Donned in her new suit and name, Supergirl battles Vartox and the alien criminals who, in their maximum security jail, were also sent into the Phantom Zone and mysteriously brought to earth. Unleashed on National City, the criminals vow to seek revenge and destroy Supergirl and the city, payment for her mother’s role in their imprisonment.

The pilot episode of SUPERGIRL is loads of fun and moves briskly from beginning to end. The cast is likable and witty, especially Melissa Benoist as Supergirl. There’s also a strong family component that’s bound to having moving and touching moments as the series progresses. The special effects are fantastic, especially for broadcast television standards.

Although overtly Christian content is minimal, the show’s overarching theme of good vs. evil can be paralleled to God’s dominion over earth as well. SUPERGIRL has some light feminist undertones, but the main troubling aspect of the pilot is the Romantic theme of “being true to yourself” instead of striving towards goals, virtues and morals that are greater than ourselves. A Christian, biblical worldview was more prominently displayed in the MAN OF STEEL and SUPERMAN RETURNS movies.

That said, there is still a strong message of being good and an emphasis on combating evil. So, SUPERGIRL is a role model all young women can seek to imitate. However, there is some violent content with multiple fight scenes depicting Supergirl being shot at, stabbed, kicked, punched, and strangled, as well as some light profanities. So, caution is advised for older children, and SUPERGIRL isn’t recommended for younger children.