"A Furry Adventure for Children" 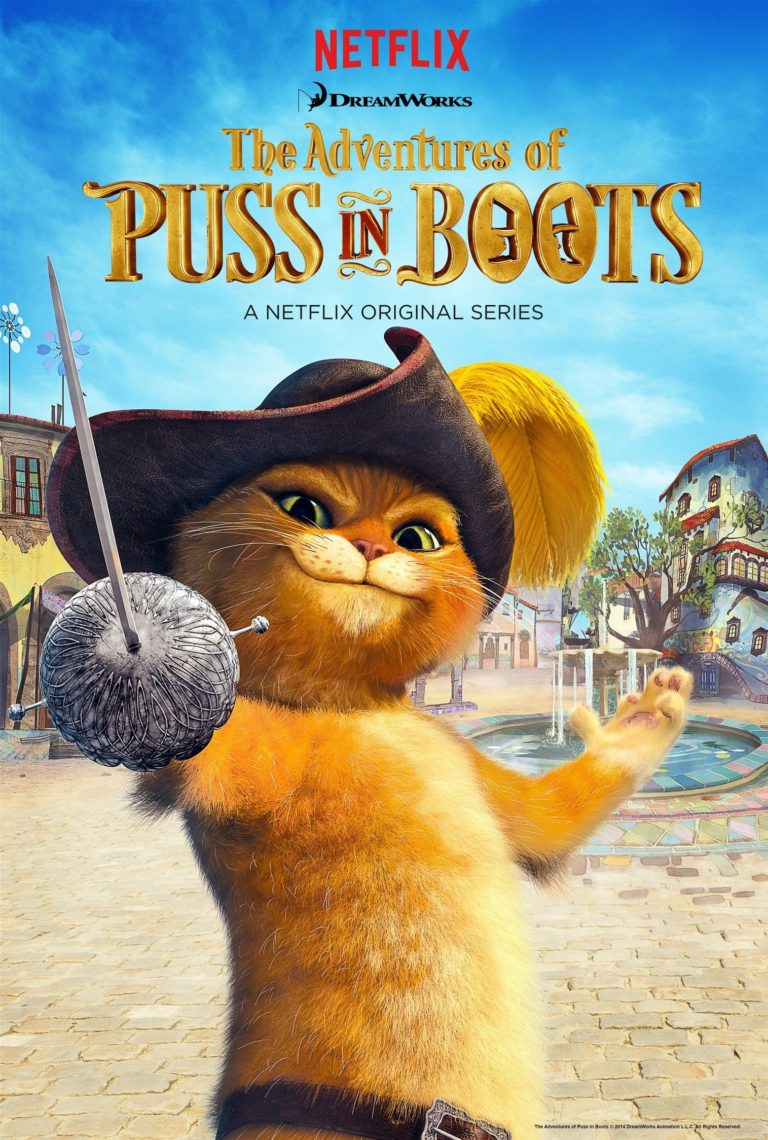 THE ADVENTURES OF PUSS IN BOOTS, an animated DreamWorks series on Netflix, begins when Puss meets a young cat, Dulcinea, who’s sweet but naïve. He saves her from thugs trying to steal her money. Puss discovers Dulcinea lives in the concealed city, San Lorenzo, home to a very impressive, coveted, treasure. Puss accidentally breaks the spell protecting San Lorenzo. He must step up and fight in order to protect the residents from thieves and bandits who want to steal the town’s sacred treasure.

THE ADVENTURES OF PUSS IN BOOTS has no real questionable elements other than some mild violence including sword fights and physical blows, which may be imitated by impressionable children. There are no obscenities or other questionable content. However, the first episode is weak, though the other episodes get better as they develop. Each episode improves greatly and is quite watchable and likable. Even better, THE ADVENTURES OF PUSS IN BOOTS has very strong moral values about standing up against evil, always doing what’s right even if it goes against the ones you love, and honoring the value of true friendship.

DreamWorks Animation’s THE ADVENTURES OF PUSS IN BOOTS is a new Netflix original program.

The program begins when Puss meets a young cat named Dulcinea, who is sweet but naïve, and he saves her from the local thugs who try to steal her money. Puss quickly learns that Dulcinea lives in the concealed city known as San Lorenzo, which is home to a very impressive, very coveted, treasure.

On a tour of the city, Puss steals from the local treasure, and the spell that has concealed the city for years is broken. San Lorenzo is left exposed to the world and its vicious thieves. The program follows Puss as he decides to stay in San Lorenzo and protect it from the bandits until the spell can be put back on the town.

THE ADVENTURES OF PUSS IN BOOTS has no real questionable elements other than some very mild violence including sword fights and physical blows, which may be imitated by impressionable children. There are no obscenities or any other questionable content whatsoever, thus making THE ADVENTURES OF PUSS IN BOOTS a very acceptable show for younger children.

However, this show sometimes has cheesy animation. Also, the first episode, “Hidden,” has a very boring storyline with one-dimensional characters. The pilot is without a doubt the worst episode of the series. However, things do improve with a very funny follow-up episode, titled “Sphinx.” Each episode thereafter becomes more in depth, more fun and more watchable, and the characters become more evolved and likable. THE ADVENTURES OF PUSS IN BOOTS gets three stars for quality and is a great show for children under 12. Even better, the program has very strong moral values about standing up against evil, always doing what’s right even if it goes against the ones you love, and honoring the value of true friendship. There is some magical content from time to time, however.